LARSSON CLAIMS NORDIC CROWN BY ONE POINT AFTER ROLLERCOASTER FINALE 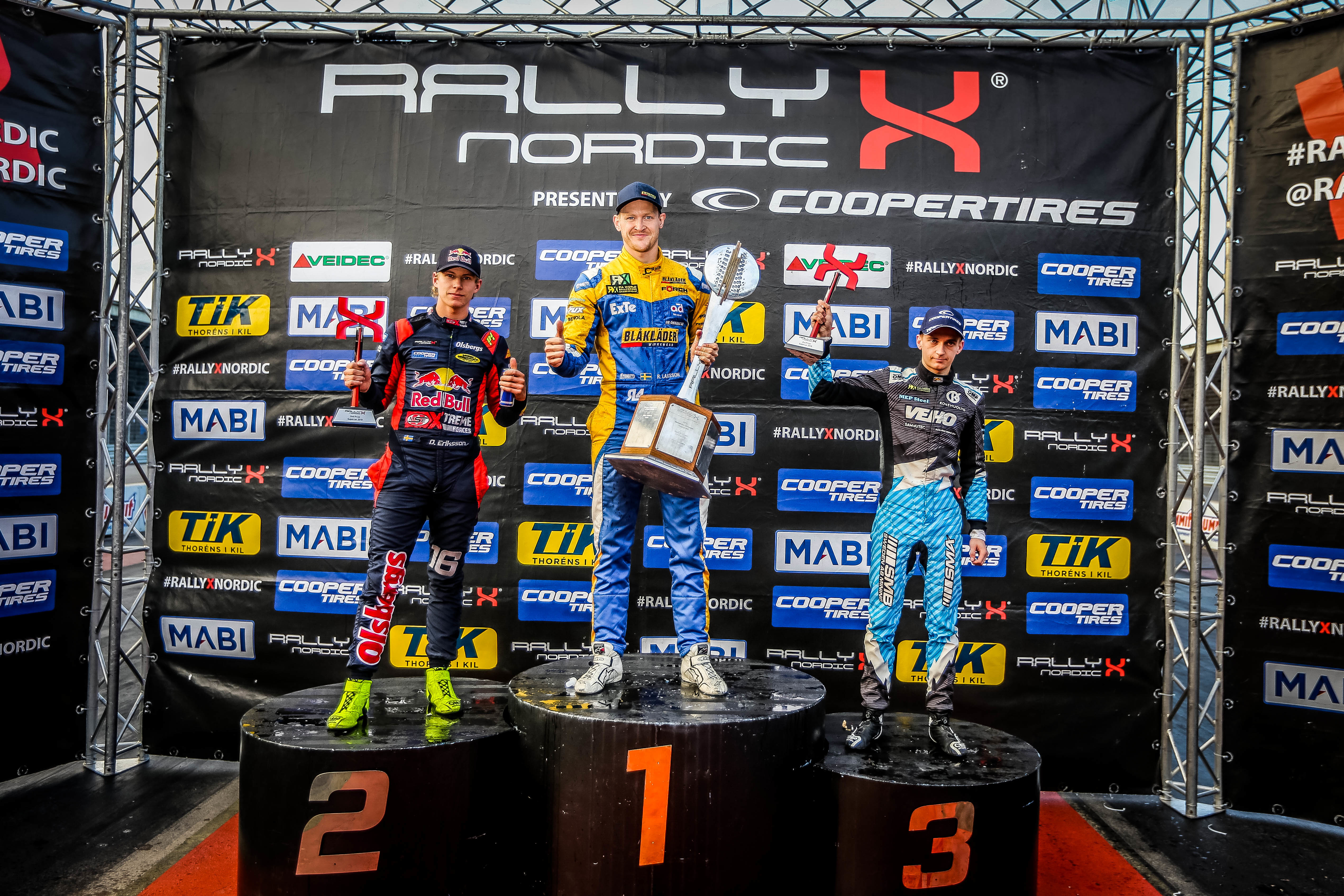 Fans were treated to a thrillingly unpredictable finale as the 2019 RallyX Nordic presented by Cooper Tires campaign came to a nail-biting conclusion at Tierp Arena last weekend (21/22 September). Competing on home soil, Robin Larsson stunned spectators with the ultimate comeback, claiming the Supercar title after rival Oliver Eriksson crashed out of the final in spectacular fashion.

JC Racetenik’s Larsson began the eagerly-anticipated showdown weekend trailing his Olsbergs MSE rival by four points, but overhauled the deficit to Eriksson when the latter dramatically made contact with the tyre barrier at Turn One on the final lap after his suspension failed. Brother to the championship runner-up, Kevin Eriksson eventually took the race victory ahead of Larsson and Sebastian Eriksson in the VW Beetle.

Supercars: Zero to hero for Larsson

Robin Larsson dominated the event’s early stages, winning all four of the qualifying rounds, but disaster struck in the semi-finals when his Audi S1 endured a slow getaway. Larsson finished fourth, leaving a place in the final just out of reach and Oliver Eriksson as the champion.

The next twist in the tale came when Larsson’s JC Raceteknik stablemate – and 2016 FIA World Rallycross Champion – Mattias Ekström dropped out of his final pole position slot with technical difficulties. Suddenly, Larsson was back in the race.

A strong start in the final left the recently-crowned FIA European Rallycross Champion fourth, but he was unable to make inroads into Kevin and Sebastian Eriksson in second and third respectively. Turn One on the last lap, however, was the scene of race and championship leader Oliver Eriksson’s season unravelling, as the young Swede suffered a failure under braking that sent him spearing off into the tyre barrier in the closing moments of the 2019 championship and handed the title to his pursuer.

“I don’t know where I am right now!” confessed 2019 RallyX Nordic Champion Larsson, who took the chequered flag second on the road at Tierp. “I caught up Andreas [Carlsson] and I saw Oliver out of the race, so I really don’t know what is going on right now!

“I don’t know what happened to him [Eriksson], but I’m so happy for our success because we’ve had amazing speed all weekend and it was taken away from us in the semi-final with some issues. The start procedure didn’t work at the pre-grid for the final so I just went full throttle in first gear and it went! I did everything I could with this Audi. I never gave up!”

Nordic’s ‘quiet man’ Jere Kalliokoski had a low-key afternoon, finishing fourth to hang on to third place in the championship standings ahead of Ulrik Linnemann and Carlsson, who completed the top five in the season-end classification.

Round one winner Kevin Eriksson bookmarked his own campaign with victory in the last round, scoring a 100 per cent win record in the Nordic races the Ford Fiesta driver entered in 2019. Namesake Sebastian Eriksson also enjoyed a strong weekend at the wheel of his Beetle as he rounded out the podium in third position.

The Supercar championship has ebbed and flowed throughout the 2019 season, with highs and lows for each of our title contenders – many of which came in the semi-finals and the final at the last round – but eventually, Robin Larsson was crowned RallyX Nordic 2019 champion.

The Supercar Lites championship was sewn up even before the semi-finals, after three qualifying heat wins and a third position in Q4 put Ben-Philip Gundersen’s points tally just out of reach for Linus Östlund, who went on to win the final.

With nothing to lose in the championship, the Olsbergs MSE driver went all-out for the win. After going three-wide and locking horns into Turn One with both JC Raceteknik cars, Östlund powered to victory despite a close call on the final lap joker merge with second-placed finisher Sondre Evjen. Gundersen took to the final step of the podium, rounding out an incredible year for the Norwegian driver.

“We’ve had some great fights this year in the Supercar Lites championship with Linus [Östlund] and my team-mate Sondre [Evjen] but it’s great to finally finish on top,” he reflected. “It’s been a really strong season for us in Nordic, so I am very happy.”

Simon Olofsson and Jimmie Walfridson finished fourth and fifth on the road, mirroring their championship positions at the end of the season.

The Supercar Lites championship has seen five different winners in 2019, confirming how competitive the class is and the calibre of drivers taking part.

Rasmus Tuominen was the eventual winner of the RX Academy championship by a single point. After being chased down in the latter stages of the season by compatriot Tommi Hallman, Tuominen held his nerve and did everything he had to, finishing behind round seven winner Hallman on the road but ahead in the standings. Jonne Ollikainen signed off his season on a high, taking third in the race to similarly confirm his podium position in the championship.

“I can’t even find the words, we struggled on Saturday so we had to recover on Sunday and we won it by one point. I don’t know what to say now. It’s been a brilliant season and I couldn’t be more thankful to my parents and all the sponsors,” said Tuominen.

In CrossCars, Nils Andersson took the title for the second year running, despite not making it to the final at Tierp Arena. Meanwhile, chief rival Jimmie Österberg suffered a nightmare weekend, scoring just four points from the last event of the year and resigning himself to the runner-up spot in the standings. Julius Ljungdahl was the driver on-form in Sweden, taking his first victory of the season.

“This feels amazing, I have been waiting for it all year!” commented Andersson. “We’re adding this to last year’s championship, so it is the biggest win so far for us. We will celebrate tonight!”