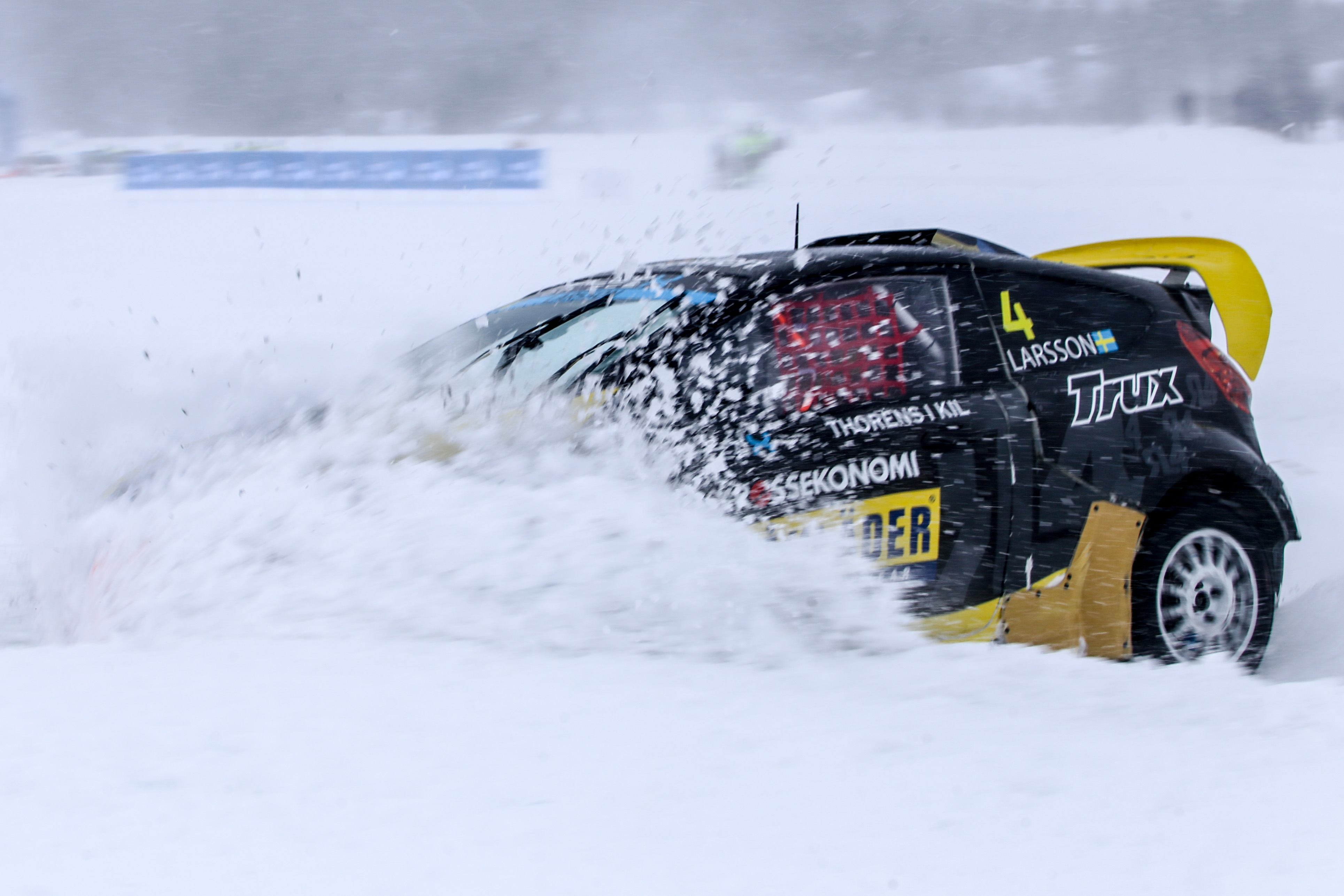 Robin Larsson kept his head while Ål around him lost theirs in the third round of RallyX on Ice in Norway yesterday (25 February), as the former FIA European Rallycross Champion spearheaded an Olsbergs MSE podium clean sweep.

Following a brace of Swedish outings at Östersund and Höljes, RallyX on Ice sped across the border to Ål at the weekend for the third stop on its 2018 calendar. A victory and pair of runner-up finishes through the qualifying phases marked Larsson out as one of the Supercar Lites class favourites heading into the semi-finals, sitting a threatening third in the intermediate rankings.

The Swede subsequently kept Oliver Eriksson honest from lights-to-flag to progress through to the final for the first time in RallyX on Ice, before errors from both his countryman and Sondre Evjen opened the door for him to sprint to a breakthrough and hugely popular triumph behind the wheel of his OMSE-prepared, Larsson Jernberg Motorsport car.

“I’ve been driving rallycross for many years, but the ice element is new to me and it’s kind of like going back to basics,” Larsson reflected. “I’m learning so much with every race and getting better all the time, and after a rough run at Östersund and Höljes, it’s great to come away with my first win.

“The starts are so important on the ice, because a good one makes the rest of the race so much simpler due to the snow spray when you’re following other cars, and I got away well every time here. The key was to not make any mistakes. It was all about moderating your pace and trying to survive. The event organisers did a great job with the track – it was a lot of fun to drive and after two bad weekends, we’ve come from the bottom to the top so I’m really happy.”

Eriksson was left ruing a case of what might have been in second, after a series of small mistakes in the final scuppered his hopes of replicating his curtain-raising Östersund success. The teenager nonetheless regained his composure to secure the runner-up spoils at the chequered flag, in so doing extending his advantage in the points classification with just one round left to run.

“It was all really decided at the beginning of the final,” reflected the 19-year-old. “Robin and I got pretty similar starts. I had the inside line, but then he came back at me and we had a bit of a battle. I tried to keep up with him, but with visibility being so limited, it was really tough.

“In the conditions, it was very easy to mess up – I think I had ‘moments’ in just about every corner, so I was quite honestly glad to bring the car back in one piece. And to still be leading the overall standings too, well I can’t complain, can I?”

The rostrum was completed by Eriksson’s older brother Kevin, who similarly had to rebound from a difficult start to the day – with both siblings finding themselves stuck in snow banks in the opening heat. The FIA World Rallycross Championship race-winner overcame a back row starting spot in the final to scythe through to the podium, in so doing maintaining his positive recent momentum.

“I’m never satisfied to finish third – I always want to win – but both Oliver and I had a very tough first qualifier so we had to climb back from that,” he acknowledged. “I had a brilliant launch in the final from the rear of the grid, but with nowhere to go I couldn’t do very much with it so I decided to take an early joker.

“Visibility was always going to be an issue out there, but it was so much fun. I fought hard and I’m happy to get a podium, and very pleased for Robin to bounce back from a tricky couple of rounds. He did a great job.”

Alexander Westlund made it four Swedes inside the top four following a very solid performance – with a Q3 victory underscoring his raw pace – while Evjen could justifiably lay claim to the ‘hard luck’ story of the day. The home hero – who hails from just up the road from the track – was in commanding form through the heats and semi-finals, winning three races out of four and looking odds-on for glory as he leapt out-of-the-blocks at the start of the final.

Unfortunately for the young Norwegian, just as his supporters were beginning to ready the champagne corks, a mistake heading onto the main straight sent him skating dramatically off-piste – an error compounded by a further delay into Turn One shortly after. Fifth place at the flag was scant reward for a determined effort weekend-long, and Evjen will doubtless be fired-up to make amends at Gol in less than a week’s time.

Pelle Wilén was the remaining final protagonist, and the Swede seemed set for a second consecutive fourth position until a last lap ‘off’ removed him from the reckoning – but not before he had once again made his presence known.

From a front row berth in his semi-final, Jonathan Walfridsson never recovered from a tardy getaway that dropped him down the order, while others to narrowly miss the final cut included Vasiliy Gryazin and Ben-Philip Gundersen – both of whom shone in the qualifiers, with the Latvian in particular catching the eye as he dominated his first two heat races.

American Conner Martell and Höljes surprise package Jami Kalliomäki continued to show flashes of promise, and the former’s countryman Josef Newgarden finished an honourable fifth in his semi-final, after improving his pace throughout the day. The reigning Verizon INDYCAR Series Champion with Team Penske revealed that the experience had been ‘a blast’, as he deservedly earned his rallycross spurs in arguably the most demanding conditions of all.

In the supporting RX Academy on Ice, Jesse Kallio replicated his tactics from Höljes to play an off-sequence ‘joker’ that proved to be the key to his success. After piling the pressure on RX2 Series regular Simon Syversen throughout the semi-final, the Finn leapfrogged the Norwegian and compatriots Sami-Matti Trogen and Joni Wiman in the final to seal back-to-back triumphs with a cool, calm and collected effort.

Having led for much of the race, former Global Rallycross Champion Wiman fought hard to finish second, with Trogen making it a Finnish top three lockout as he reached the rostrum for the first time with a mature showing. Two-time FIA European Rallycross Champion Timur Timerzyanov was a late addition to the entry list and won on his ice racing debut in Q1, before going on to take the flag fifth in the final following an early ‘off’.

In Speedcar Xtreme – for potent 312kg, 150bhp crosskarts – age once again defied youth as round one winner Finn Erik Løberg left FIA World RX superstars Timmy and Kevin Hansen trailing in his wheeltracks. A later joker enabled the elder of the two Swedish siblings to prevail in the scrap for second.

“For the first race meeting on this frozen lake at Ål, I think we can say it has been a spectacular success,” enthused Olsbergs MSE CEO Andreas Eriksson, the man behind the exciting winter sport initiative. “The racing was the most exciting that we have seen to-date, with some incredible doorhandle-to-doorhandle duels and no shortage of drama throughout the field.

“Congratulations as ever to all of our podium-finishers, and also to Josef Newgarden, who took on a tremendous challenge by trying something completely outside of his comfort zone and fared admirably – he has every right to feel very proud of his performance here. Josef has set the bar high for Hélio Castroneves at Gol next weekend, and I wait with great interest to see what unfolds in our eagerly-anticipated RallyX on Ice finale.”

All four rounds of RallyX on Ice will be livestreamed by the world’s biggest digital motorsport platform, motorsport.com via its Motorsport TV online channel.