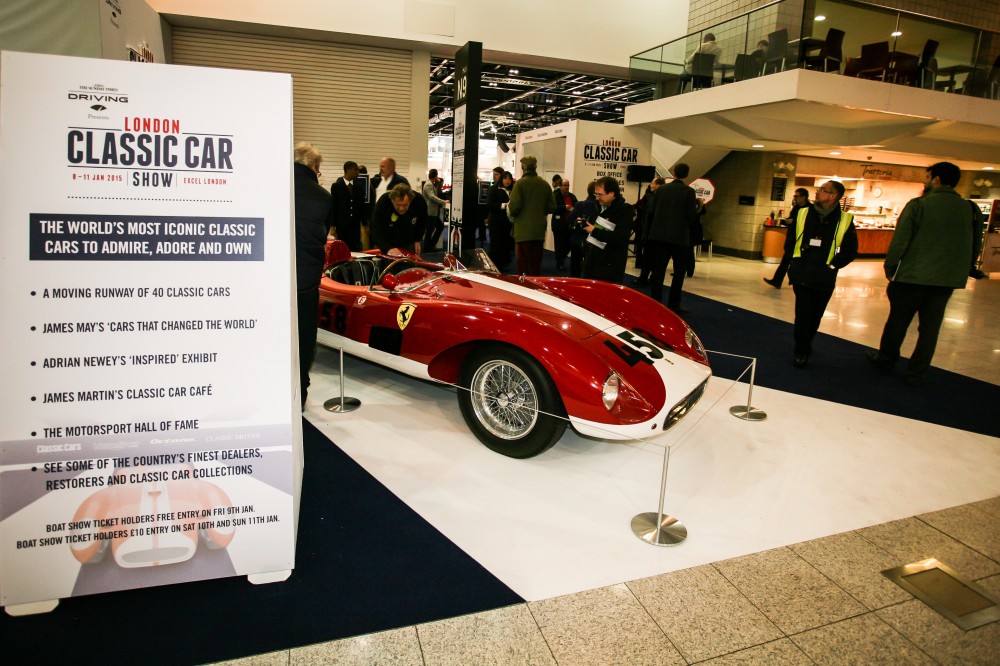 When the inaugural London Classic Car Show opened its doors in January, it covered 18,000 sq m of prime exhibition space at ExCeL London.

Crammed with innovative features, mouth-watering classic cars and a star-studded list of celebrity visitors, that inaugural show was such a success that even before the show closed it was announced that the 2016 edition (18-21 February, 2016) would be almost half as big again.

And now it’s grown again to a whopping 34,000 sq m – that’s nearly double the size and content of the first show!

The latest addition to the Show is an entire new hall that will be dedicated to the best single marque classic car clubs. Show organiser, Brand Events will be working with around 25 leading car clubs devoted to prestige and performance cars to create a stunning display of privately owned classics from the 1920s to the 21st century.

Reminiscent of a British Motor Show from the 1960s, the hall will also feature stands from relevant classic car dealers. Visitors will be treated to period entertainment to continue the hall’s retro vibe. “We are expanding the London Classic Car Show because that’s what everybody wants,” said Event Director Bas Bungish. “Feedback from visitors and exhibitors at the first show told us that they loved the innovation, the quality of the displays and the atmosphere so much that they wanted even more!

“Despite being in its infancy, the London Classic Car Show has already established itself as a premium show and this will be reflected in the quality of the car clubs we will be inviting.”

Among the other aspects of the Show that will be bigger in 2016 is the event’s centrepiece, ‘The Grand Avenue’, a highway running through the middle of show and along which many iconic classics were driven. Everything from genuine Formula 1 Grand Prix racers to rare classic cars via London to Brighton veterans took to The Grand Avenue, allowing visitors to see and hear their favourites in action. For 2016, The Grand Avenue will be extended to give the cars even more space to stretch their legs.

The second London Classic Car Show will also have a number of other new features, including ‘Classic Corner’, an open forum running virtually continuously throughout the show where guest speakers will talk about classic cars as investments, about the pleasure a classic car can bring and offer advice about buying at auction. More dealers and more trade stands are also promised.

A standard adult entry ticket will cost £23 (children £17) with family tickets at £65. Premium access to the glittering premier evening will cost £65 each for which tickets will be strictly limited.

“We are delighted to hear that the first London Classic Car Show was so successful that the second edition is going to be even bigger. Thankfully we have the space at ExCeL to provide the perfect stage for this innovative and genuinely exciting show,” said Jeremy Rees, Executive Director, ExCeL.

More information and ticket bookings can be accessed via the show website – www.thelondonclassiccarshow.co.uk