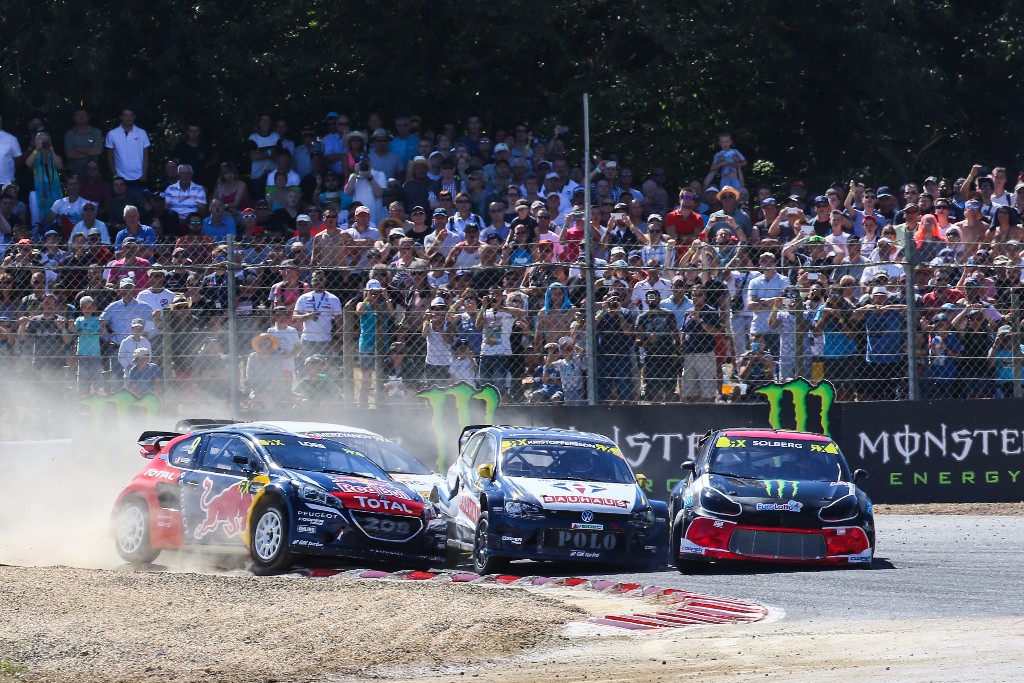 The FIA World Rallycross Championship presented by Monster Energy will travel to Loheac in Brittany this weekend (1-3 September) for the best attended round of the season, the Bretagne World RX of France.

Loheac RX attracts over 70,000 fans each year at the packed circuit which will see a maximum entry in all FIA classes with a total of 60 Supercars (25 World RX; 35 Euro RX), as well as 35 entries in the penultimate round of the Super1600 category. A further 15 cars start the sixth round of the supporting RX2 series.

Staged in the small Breton village of Loheac in the north-west of the country, there will be patriotism aplenty in the packed French grandstands as no less than 23 home drivers take part.  At the helm will be nine-time WRC Champion and full-time Team-Peugeot Hansen driver, Sebastien Loeb, who is currently fourth in the driver standings. Fellow countryman JB Dubourg finished on the podium at Loheac two years ago, and will be eager to put in another strong performance on home soil.

France’s Guerlain Chicherit will contest his home event in his development season with a Renault Clio while France’s Herve “Knapick” Lemonnier will make his fourth start of the year in a Citroen DS3. Local driver Gaetan Serazin (2012 and 2015 French Rallycross Champion) and Emmanuel Anne will also compete in Peugeot 208s. In Euro RX, Henning Solberg has been replaced by Frenchman Patrick Guillerme, who has won two rounds of the French Rallycross Championship already this year.

Joining the World RX line-up for the first time will be DTM star Nico Mueller, driving an Audi S1 EKS RX Supercar alongside team-mates Mattias Ekstrom, Topi Heikkinen and Reinis Nitiss. Loheac will mark the first time ever that EKS has run four cars in World RX.  Muller spoke positively about the opportunity: “These cars are insane and you become addicted. My dream has been to compete in World RX and that dream will come true in France. That’s a big challenge, but also a great chance. I want to enjoy it as much as I can, but I will not travel to France only for fun – I’m also aiming for a proper result.”

Britain’s Alister McRae will also make his World RX debut in Loheac replacing Guy Wilks in the LOCO World RX Team Volkswagen Polo RX Supercar. McRae – younger brother to the late rally legend Colin McRae – has extensive rally experience having competed in over 75 WRC events, the Dakar Rally and the Asia Pacific Rally Championship – which he won in 2011. With a one-off rallycross event in Australia under his belt, McRae expects his Loheac RX outing to be a “baptism of fire” but one that he is relishing.

In the headline World Championship, PSRX Volkswagen Sweden’s Johan Kristoffersson will be eager to maintain his healthy 35-point lead over team-mate Petter Solberg at the top of the driver standings.  As last year’s victor in France and winner of the three previous World RX rounds (Canada, Sweden and Norway), Kristoffersson will be the one to beat in Loheac.

Eager to thwart Kristoffersson’s charge will be Team Peugeot-Hansen’s Timmy Hansen who won Loheac RX back in 2015. Hansen reflected: “Winning in front of Peugeot’s home crowd made me feel like I was on top of the world for a short moment. Looking out from the podium, there was a sea of people – a huge buzz.  I can’t wait to get there again this year. It’s one of the biggest races of the season and, along with Holjes, it is undeniably a highlight of Team Peugeot-Hansen’s year.”

In the penultimate round of Euro RX, where Sweden’s Anton Marklund tops the table, a total of 35 Supercars will take part.  Joining regular competitors will be Pailler brothers Fabien and Jonathan, who will race Peugeot 208 Supercars, accompanied by Lebanon’s Nabil Karam. Also driving a Peugeot 208 will be France’s Rodolphe Audran. Britain’s James Grint will return to Euro RX in a Mitsubishi Mirage Supercar and France’s Firmin Cadeddu who will compete in a Citroen C4. David Olivier will once again compete in his home event in an Olymeca Sport Dacia Logan, now fitted with a turbo-charged engine.

The RX2 International Series presented by Cooper Tires will resume in France where home hero Cyril Raymond continues to lead – 14 points ahead of Britain’s Dan Rooke.  Talking about his home race, Raymond commented: “It’s always special for me to compete in France, and to go to Loheac as championship leader gives me even more motivation to put on a real show for all the spectators. Dan will clearly be fired-up to bounce back after Canada and he has proved to be a quick learner at every circuit so far this year, which means I will need to be absolutely on top of my game to beat him. It’s a challenge I am up for.”