By Emma Illman8th May 2019NEWS 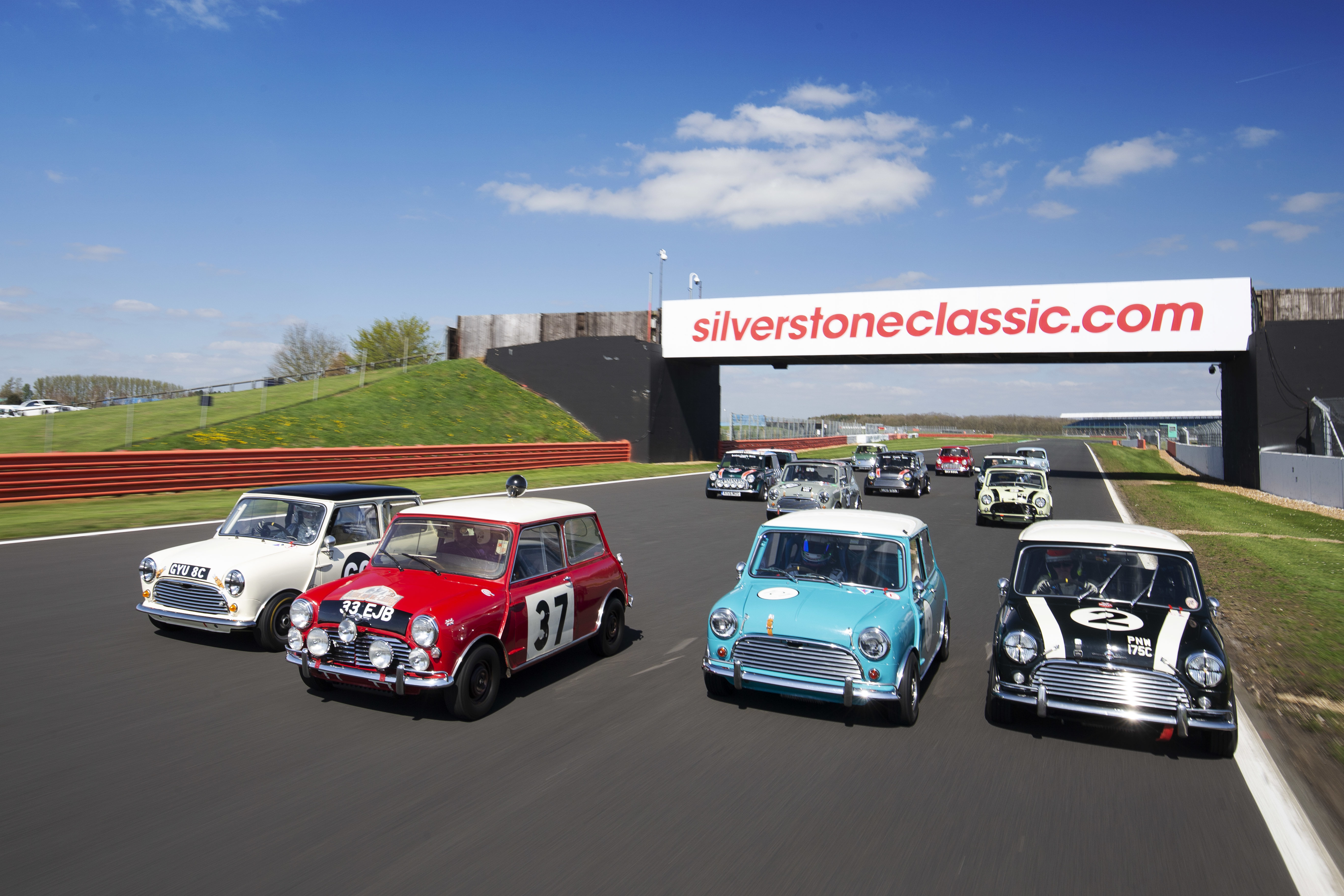 A world record grid of period Minis will celebrate the diminutive icon’s 60th birthday in staggering style at this summer’s Silverstone Classic (26-28 July). Never before – and maybe never again – will so many Minis be seen racing all together on track.

Fittingly 60 entries have already been received for what are going to be a pair of incredible races for the Mini Celebration Trophy Presented by Adrian Flux, marking the British legend’s sparkling Diamond Jubilee at the Classic. With a maximum of 58 starters permitted on Silverstone’s full Grand Prix circuit, latecomers are now being placed on a growing reserve list.

To ensure all festival-goers will be able to share in the Mini’s magical milestone, the action is spread across all three days with what is sure to be a frantic qualifying session on Friday ahead of two unmissable 20-minute showdowns on Saturday and Sunday.

As the entire multitude of original pre-1966 Minis are fitted with similar race-prepared 1275cc engines and built to identical technical regulations – the level of competition is going to be feisty throughout the tightly-packed record field. Even more vigorous as the unrivalled gathering also stars a number of top drivers.

Entries have come from throughout Europe – and as far afield as the US – and are headed by all the proven Mini top guns – aces such as Jonathan Lewis, Ian Curley, Bill Sollis, Lars Ekorness and Nick Swift.

These are joined by best-selling writer of crime-fiction Peter James and a number of well-known racers from the British Touring Car Championship ranks: Jeff Smith, Michael Caine and Patrick Watts as well as 2013 BTCC Champion, Andrew Jordan.

“With 58 minis slipstreaming around Silverstone, these are going to be absolutely mad races!” predicts Jordan who recently gave BMW’s latest 330i M Sport its maiden win in the 2019 BTCC series opener at Brands Hatch. “I’m really looking forward to it – I utterly love historic racing and the Silverstone Classic which is now such a massive event. These Mini races will be one of my highlights of the year.

“We’ve bought a car which we’re rebuilding at the moment, which in itself is really enjoyable. We will have a few tests before the event and then see how we go. While I race historics for fun, of course I’m going to try to win. Actually, I think we’ve got a very good chance of winning!”

While yet another world record grid is nothing out of the ordinary at the biggest retro racing festival on Earth, Silverstone Classic CEO, Nick Wigley,is understandably thrilled. “Last month we announced a record, full-capacity grid of historic F2 single-seaters and now we have the prospect of this equally incredible line-up of Minis,” he enthused. “Everyone loves the Mini and to see so many of them all racing together bumper-to-bumper on the country’s premier circuit is going to be a staggering sight that no one who’s lucky enough to witness it will ever, ever forget.”

Encouraging all Mini owners and enthusiasts of Sir Alec Issigonis’ game-changing gem to share in the spectacular Diamond Jubilee birthday party at the Classic, the event is offering a unique Mini Celebration Package, which includes an anniversary track parade at lunchtime on Friday. This cost-saving offer provides owners of original pre-2001 models with a pair of adult tickets (for Friday or the full three-day weekend), a vehicle pass giving access to the Mini Celebration display area, plus entry into the Mini Celebration track parade taking place on the full Grand Prix circuit which, over the ages, has hosted so many giant-killing Mini heroics (photos top row below of Minis racing at Silverstone in the sixties).

Those wishing to join the party can select the Mini Celebration Package from the ticket options available on the official silverstoneclassic.com website but numbers are limited and package bookings are only possible until the end of May.

Whether or not taking advantage of the Celebration Package, all those wishing to attend this summer’s Silverstone Classic must purchase their tickets in advance.

Adult admission starts at £45 and all tickets will provide access to both Silverstone racing paddocks, all open trackside grandstands, live music concerts which this summer mark the 50th anniversary of Woodstock on both Friday and Saturday evenings, air shows, Drive Live test drives, funfair rides and the vast majority of the family entertainment on offer.

A wide range of child, young adult and family tickets are also available, along with camping and hospitality options. Full details of all 2019 ticket prices are detailed on the silverstoneclassic.com website.