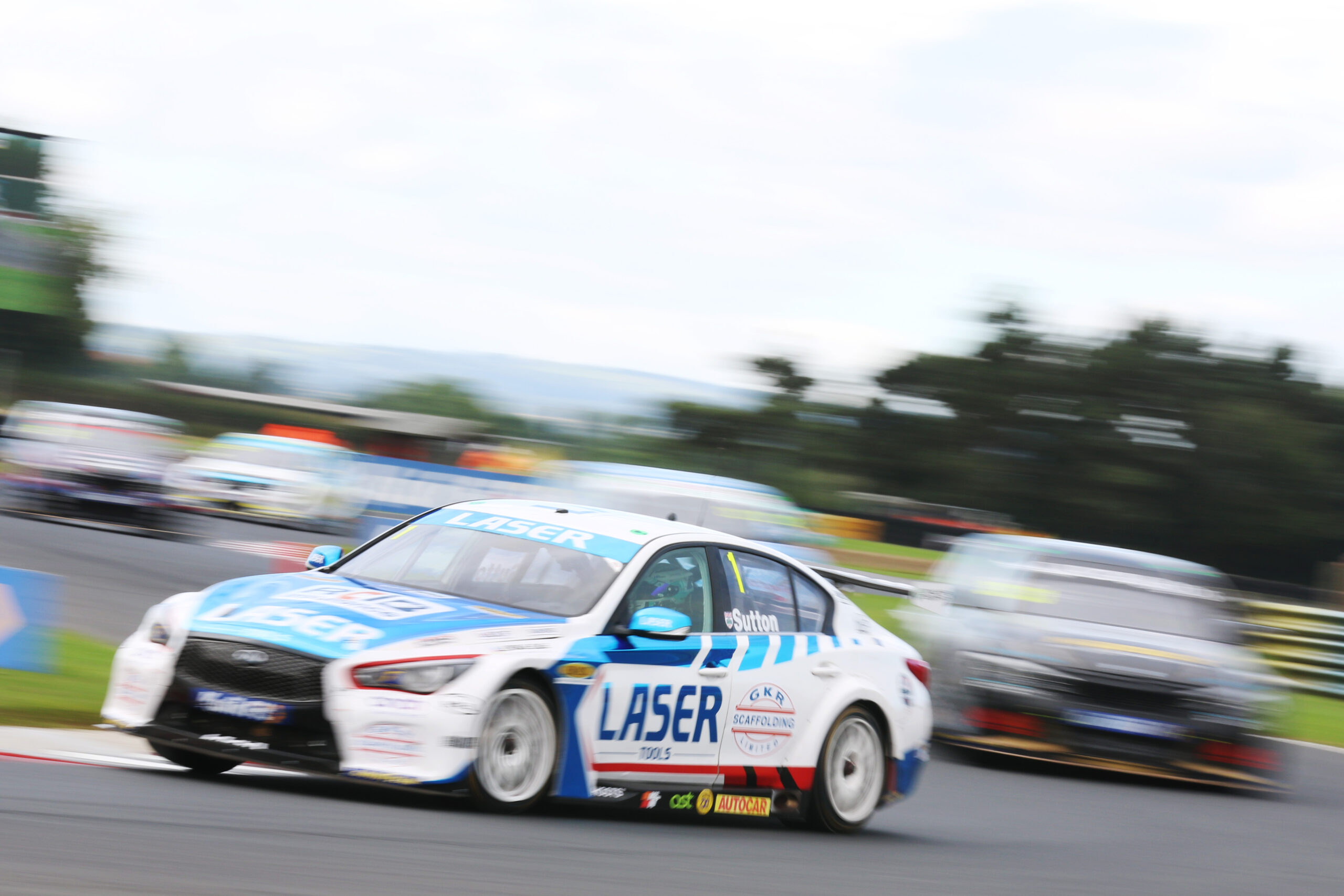 Colin Turkington ensured that normal service was resumed in the finale, as the ‘King of Croft’ scored his 13th career victory at the North Yorkshire venue.

Despite several title challengers scoring big on the day, standings leader Ash Sutton left the circuit with his points advantage largely intact as he bagged a brilliant trio of top six finishes.

It was Moffat who proved to be the Laser Tools Racing hero this weekend, however, as he converted a first-ever pole position into a commanding lights-to-flag win in the opener.

Moffat controlled the pace from the outset, often cleverly bulking up the bunch behind as his rear-wheel drive Infiniti Q50 exited the final Hairpin, and he expertly fended off the advances of Hill’s Ford Focus throughout to take his first win since Silverstone in 2018.

BTC Racing’s Senna Proctor finished third after he got the better of Team BMW’s Turkington around the outside of Tower Bend on the opening lap.

It was Hill’s turn to produce a masterful display in the second pulsating bout as he made a fantastic early move past the pole-man.

Moffat, running maximum success ballast onboard his Infiniti virtue of his earlier race win, struggled slightly through the Complex as his Goodyear tyres came up to temperature and Hill made the most of his opportunity.

Hill immediately disappeared into the distance as a quite remarkable battle for second ensued.

Moffat hung on to the place, somehow, even after a mid-race hit from the BTC Racing Honda of Josh Cook, which caused a concertina effect behind.

Team BMW’s Turkington was bulked up following contact at the final Hairpin, leading to a further incident at turn one with Halfords Racing with Cataclean’s Gordon Shedden, which subsequently enabled Ginsters EXCELR8 with TradePriceCars.com’s Tom Ingram and Sutton past both of them.

When the dust settled, it was Cook completing the podium ahead of Ingram, Sutton, Shedden and Turkington in a scrap that will live long in the memory.

It was ‘lucky 13’ for Turkington as he took the spoils in the final contest, continuing his remarkable record around the 2.13-mile circuit.

The four-time champion has often shied away from his ‘King of Croft’ moniker over the years, but this proved to be a vital victory as the Northern Irishman kept his championship challenge on track.

Halfords Racing with Cataclean’s Shedden equalled his best result of the season so far with second as he held off Sutton, although the latter still scored an important extra point for setting the fastest lap.

At the conclusion of another dramatic weekend of BTCC action, Sutton now holds a solid 29-point advantage with nine races remaining. Hill, Turkington, Cook and Ingram are separated by just eight points as the quartet look to hunt down the reigning champion.

Laser Tools Racing and Sutton are also holding sway in the Teams’ and both Independents’ tables, whilst BMW still leads the way in the Manufacturers’/Constructors’ championship.

Carl Boardley triumphed in the Jack Sears Trophy although Daniel Rowbottom continues to top the overall table in that category.

It is a quick turnaround for the UK’s premier motorsport series as Rounds 22, 23 and 24 of the 2021 Kwik Fit British Touring Car Championship take place at Silverstone next weekend (25/26 September).

“Jake [Hill] and the Focus have been so fast all year, so I knew my life was going to be very difficult. Through Sunny In to Sunny Out I was really struggling. The car was quick there yesterday, but I was slow on the edge, which was easy to create understeer or oversteer, and being in the lead I thought I’d just try to dial it back and try and use the traction. We had to think about that race a lot and he made it difficult but that just makes it more rewarding to get that first win in rear-wheel drive for Laser Tools Racing.”

Jake Hill said: “You’d have to go back to my Ginetta Junior days to find another win I’ve had as easy as that. Get in there. I’m absolutely over the moon with that. Huge credit to these guys behind me, they’ve done a fantastic job. The car was faultless, even with the weight in it was easy to manage, and the tyres stayed with me right until the end – just a massive thank you to all the team!

“The strong deficit we have compared to the rear-wheel drive cars is the opening laps. I respect Aiden [Moffat] because he left me the room where I needed it and vice-versa and we managed to squeeze through! Once we got into the lead there was the safety car and that was fine, managed that. Off we went – I got my head down and just cracked on with it. It was absolutely fantastic! Mark Blundell (Team Principal) owes me a barbecue now!”

Colin Turkington said: “The ‘King of Croft’ lives on for another year! A win is a great way to end my day. Even sitting on the grid in P1, looking good, I wasn’t believing really that I could do that because you never know the pace or the handling of the car. But once I got through the first few laps I knew the car was better than I’d had all day. I could see Ash [Sutton] was behind Gordon [Shedden] and probably didn’t want to take too much risk, so I just got my head down. Big credit to Team BMW, they had a lot of work to do between races one and two but it paid off!

“I took a look every time coming out of the hairpin and I could still see a black car in front of a blue car so I was quite pleased about that. But I really enjoyed that. As I’ve said many times, Croft is a great circuit to drive and especially when the 3 Series is in the sweet spot. It’s pure delight.

“I’m not sure if P3 [in the Standings] is good or bad. It’s good points and great to get a win, whatever weight we have to carry at Silverstone. We’ll just plan our strategy accordingly. But we’re all going to enjoy this win for now. It was hard earned from race one and race two. Race two we were in the wars and nearly didn’t survive, so it’s great to convert it.”