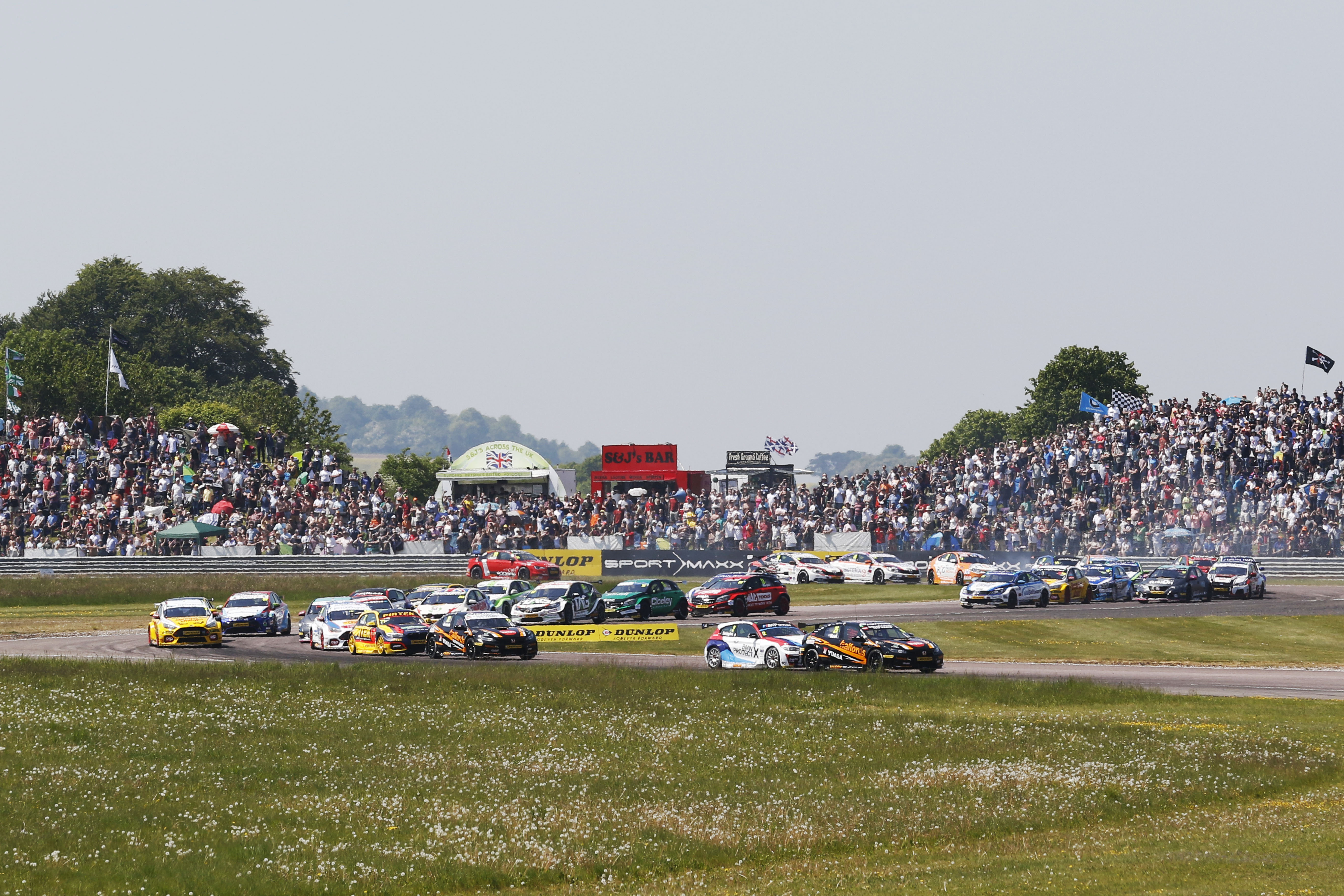 Mac Tools with Ciceley Motorsport’s Adam Morgan moved to the summit of the 2018 Dunlop MSA British Touring Car Championship standings with victory in the final race in front a record crowd at Thruxton today (20 May), following on from points scoring finishes in the first two bouts in Hampshire.

Matt Neal claimed the early bragging rights as he converted pole position into a race one win, before Josh Cook scored his second victory in as many BTCC meetings with victory in the next contest.

Despite the season so far largely being dominated by a number of young drivers, it was the multiple BTCC champion duo of Neal and Turkington that fought back at the UK’s fastest circuit.

Neal took a maiden pole position for the all-new Honda Civic Type R during qualifying on Saturday, and he duly converted that advantage into a 62nd BTCC career victory. Turkington pulled his BMW 125i M Sport alongside the Honda off the line, but Neal hung on at the Complex as all 32-cars made it through for the first time.

Turkington kept Neal honest throughout the 16-lap duration, but their positions remained the same until the finish.

The Team GardX Racing with Motorbase Ford Focus of Sam Tordoff hounded down Dan Cammish’s Honda for the final place on the podium, but the latter fended off every advance, and grabbed the second outright rostrum of his debut season.

Power Maxed TAG Racing’s Cook then followed up his recent Donington Park success with another stellar display at the Hampshire speedbowl.

Pole-sitter Neal couldn’t hang on off-the-line as Turkington’s BMW blasted ahead of the Honda Civic Type R on the run down to the Complex.

Cammish’s Honda bogged down at the start, which allowed Tordoff’s Ford Focus and Andrew Jordan’s Pirtek Racing BMW by in a tussle for third.

Progress was soon being made behind, however, as the Power Maxed TAG Racing duo of Cook and Senna Proctor slipped past Team Shredded Wheat Racing with Gallagher’s Tom Chilton. Proctor’s advances were halted at that point but team-mate Cook was on a charge as he saw off Tordoff and Jordan in quick succession.

Cook’s Astra then surged around the outside of Neal’s Honda at the final chicane and by lap 10 the local hero was challenging for the lead. The moment of truth came at the end of the next tour as the Bath driver pulled an almost identical move on Turkington’s BMW 125i M Sport.

Team GardX Racing with Motorbase’s Tordoff held on to fourth from Jordan and Proctor.

Morgan’s second win of the season came in dominant fashion as he commanded the final race from start-to-finish in his Mercedes-Benz A-Class.

The Lancastrian driver got a good getaway from pole position and he was able to defend well from an early attack from the Vauxhall Astra of Proctor.

Morgan’s job was made slightly more comfortable when a charging Jack Goff hauled his Honda onto the back of Proctor’s Astra, and a squabble for second ensued.

Goff made his move stick on Proctor in the final third of the contest, but it was too late to make any inroads into Morgan’s advantage. The 29-year-old took the chequered flag and with it the lead in the overall drivers’ standings.

Tordoff completed a solid day for Team GardX Racing with Motorbase by taking fourth, whilst Team BMW’s Turkington fired himself back into championship contention with another top five finish, following on from his double podium earlier in the day.

Morgan leads the standings by just a point from Cook, with previous championship leader Tom Ingram a further ten points in arrears. Speedworks Motorsport’s Ingram endured a challenging day after a non-finish in the opener, but the Toyota star provided some respite with a seventh place and a brand new lap record in the finale.

Yvan Muller’s 2002 Thruxton benchmark was the longest standing lap record on the BTCC calendar, but it was beaten a number of times today. Eventually it was Ingram who earned the ultimate accolade – his 1:17.060s setting a new marker.

Vauxhall lead the Manufacturers’ standings, as well as the Teams’ table for the Power Maxed TAG Racing squad. Morgan and his Mac Tools with Ciceley Motorsport team hold the advantage in both Independents’ standings, whilst a trio of top ten finishes for BTC Norlin Racing’s Chris Smiley pushed him to the top of the Jack Sears Trophy.

Matt Neal said: “That was very special – this one’s for Henry Hope-Frost. We’ve certainly got the fever today. It’s the first win for the new Honda Civic Type R, and on Yuasa’s 100th Anniversary weekend. I think the warm weather suited us and helped us to get the power down with front-wheel drive, and I got the best start I’ve made in a couple of years. We did a race simulation yesterday and knew we were pretty solid over a race distance. Still, I thought Colin would come back at me, but one of the new Civic Type R’s key strengths is its speed through the quick corners out the back of the lap and that allowed me to stretch my legs a bit.”

Josh Cook said: “That was really good fun. To win my first race at Donington Park was obviously enjoyable, but to do it from the middle of the pack like that was even better. It’s the first time I’ve been round here this weekend without any weight in the car. The Astra was on rails at the front and we were really strong through Church, which allowed us to carry good momentum onto the back straight. That said, the rear was moving around quite a lot which caused plenty of big sideways moments! All credit to the Power Maxed Racing guys – qualifying didn’t quite go our way, but we knew we had the pace and when the points are available, we’ll certainly take them.”

Adam Morgan said: “I didn’t expect this, to be honest, because I knew Senna [Proctor] and the Vauxhall would be quick so I was anticipating being put under a bit of pressure, but I was confident and I got the start really hooked-up. After getting through the Complex for the first time, it was just qualifying lap after qualifying lap – it was, ‘let’s get on with this and go’. Senna kept me honest and pushed me all the way, and Jack [Goff] did the same later on but I was able to manage the gap and on the last lap, I was able to calm it down a bit and enjoy the moment. It’s a credit to all the Ciceley guys, who have worked their socks off over the winter and early part of the season. To be leading the championship is a first for us, so now we’ll go to our favourite track carrying full ballast, and I’m looking forward to it.”