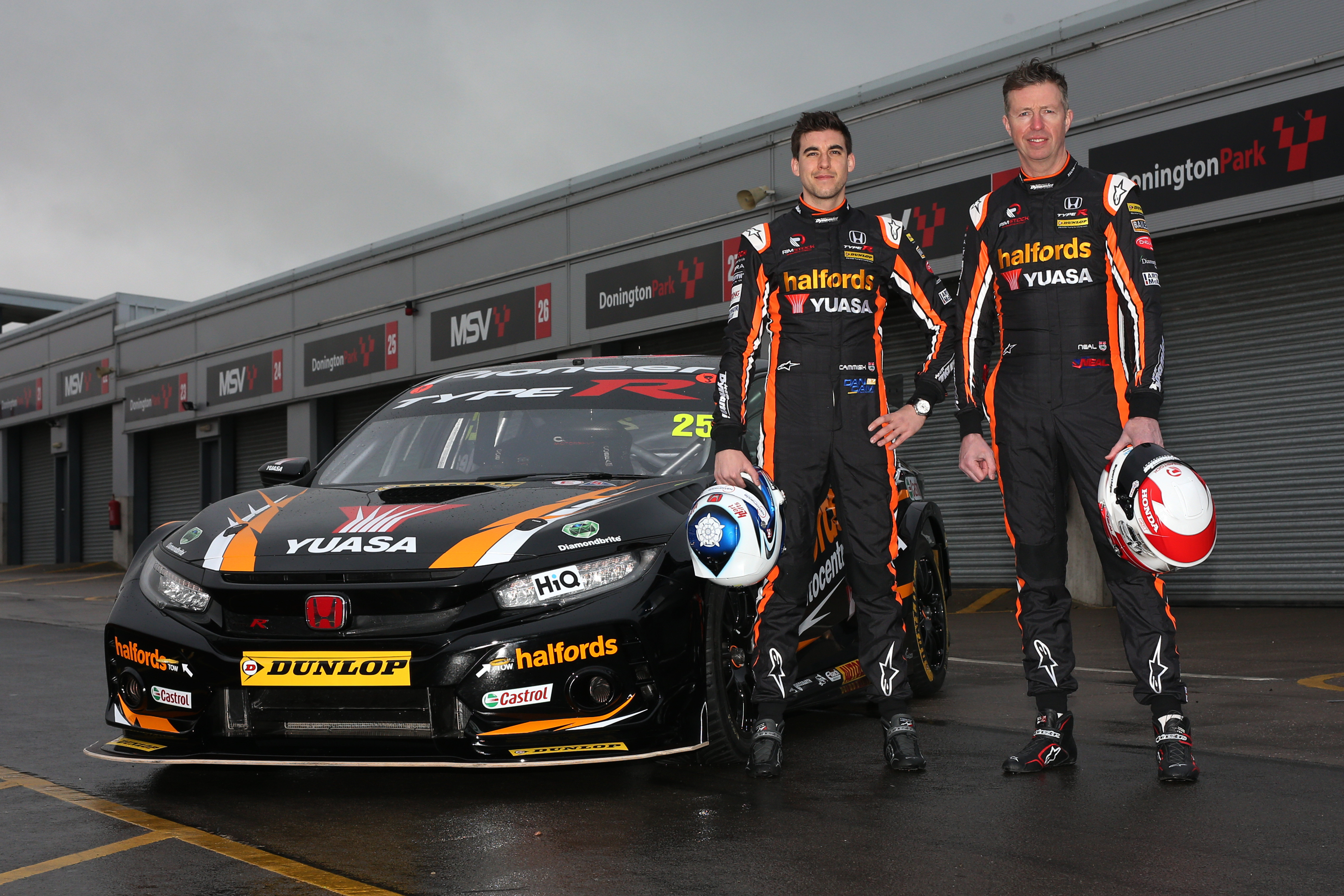 Honda duo Matt Neal and Dan Cammish are eager to reward the Halfords Yuasa Racing crew for their tireless work in readying the team’s new Civic Type R for Dunlop MSA British Touring Car Championship action – by racing to the podium in the season curtain-raiser at Brands Hatch next weekend (7/8 April).

A herculean effort went into preparing the two new FK8-generation models, with the second car only being completed a handful of hours before it took to the track for the Season Launch group test at Donington Park earlier this week. The first car had already been racking up the miles at Parcmotor Castellolí in northern Spain, and both Neal and Cammish added to that tally with a final run at Brands Hatch today.

Three-time BTCC Champion Neal is chasing history in 2018 as he targets a record-equalling fourth Drivers’ crown in Britain’s premier motorsport series, while 28-year-old Cammish – who arrives with a glittering résumé, having won no fewer than three titles in the TOCA support series – has his sights firmly set on making a fast start.

“It’s been a titanic effort from all the boys, with no shortage of midnight oil burned recently and the new Civic Type R is an absolute work of art. The FK8 is a completely new platform that Honda has designed and built for the road, and it’s an excellent base model for the new race car, which already feels more stable and planted than its predecessor. The weight distribution is fantastic, although we still need to get used to the longer wheelbase and being such early days, it remains a work in progress at this point.

“The strength-in-depth up and down the grid looks to be as impressive as ever, though it’s impossible to know what hand everybody is showing at this stage of proceedings – it’s always a great game of poker pre-season – and we definitely still have a little bit extra in our pocket. Brands Hatch’s Indy Circuit has traditionally been a happy hunting ground for me and the target for the weekend has to be the podium, although if we could grab a win first time out with the new car, that would obviously be amazing. Dan has really stepped up to the plate, too. He has an admirable work ethic and is quickly getting up-to-speed. I’m under no illusions about what we are up against, but we’ll do our best and hopefully the results will speak for themselves.”

“I’ve settled into the team very well. We’ve had a few weeks together now, and we headed straight to Spain after I joined for the test, which was a good opportunity to break the ice and really get to know everybody at Halfords Yuasa Racing. It’s been great to build up a rapport with the guys on my side of the garage, and Matt and I are getting on really well. He’s the most experienced driver in the championship, and what he doesn’t know about racing touring cars almost certainly isn’t worth knowing. He’s been very open with me, and I’ve been picking his brains as much as possible and absorbing everything I can. We seem to share a similar driving style, and the same kind of comments and feedback on changes.

“Out-of-the-box, the new Civic Type R seems really impressive, which is very confidence-inspiring. The guys pulled off a marathon effort to get my car finished in time, and notwithstanding a few minor niggles in the group test – which are only to be expected during a shakedown – it ran like clockwork, which is testament to all the boys at Team Dynamics for the superb job they did. I think we are pretty much there pace-wise, too, so going to Brands Hatch, my aspirations are high. I’ve got a great team behind me, and there’s no reason why we shouldn’t be able to challenge inside the top ten or even top five from the outset. I’ll be giving it absolutely everything, and I’ll be disappointed if I’m not fighting for podiums sooner rather than later. I’m really looking forward to letting this car off the leash!”