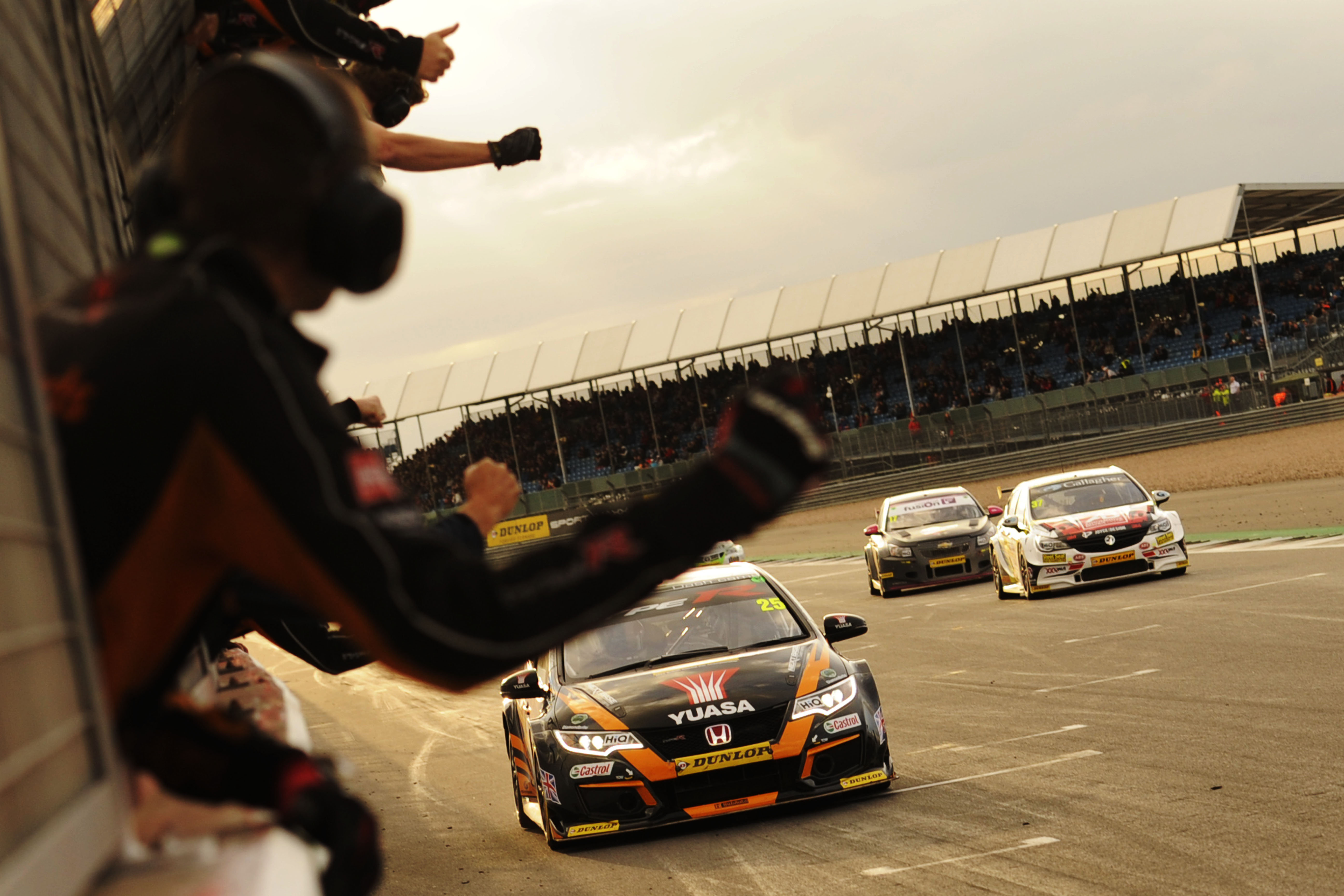 Matt Neal produced arguably the drive of the weekend in the Dunlop MSA British Touring Car Championship at Silverstone today (17 September), as the three-time title-holder stormed through the pack from 12th on the grid to tally his 61st career triumph.

At the celebrated ‘Home of British Motor Racing’, Neal qualified his Honda Civic Type R fourth. Despite carrying 57kg of success ballast, Halfords Yuasa Racing team-mate Gordon Shedden was just 0.165s behind, but so close was the field – with all 32 cars blanketed by less than a second – that the deficit equated to eight positions, leaving the Scot a disappointed 12th in the pecking order.

In the curtain-raiser, Neal initially emerged at the head of a multi-car scrap over fourth until contact with Mat Jackson saw him slip outside of the top ten. He would go on to cross the finish line 13th, two places behind Shedden, with the pair’s efforts earning Honda the Manufacturers’ award.

In race two, Shedden went on the attack as the defending champion posted the fastest lap on his way to seventh position, but Neal struggled for pace on the harder-compound tyres and had to recover from a wild slide at Brooklands on the opening lap that dropped him to 20th, with a seven-place gain yielding 13th when the chequered flag fell.

In the finale, there would be no stopping the Midlander, as he proved the potential of the Civic Type R by picking off his rivals one-by-one. By lap 16, he was up into second and after shadowing Rob Huff for five laps, his sustained pressure paid off as the race leader ran slightly wide on the exit of Copse and Neal seized his chance to pounce for his second victory of 2017.

There was less joy, sadly, for Shedden, who found himself unceremoniously removed from contention by Rob Austin while in the mix for a podium finish, but the Scot will nonetheless travel to Brands Hatch for the season finale in a fortnight’s time (30 September / 1 October) still in with an outside chance of retaining his hard-fought Drivers’ crown.

Matt Neal:
“All’s well that ends well! We laid down the groundwork for the weekend in qualifying, but the first two races didn’t exactly go to plan as we seemed to get repeatedly shuffled out. Mat and I just got locked together in race one, and then we were on the harder tyres in race two. In race three, I was on the right tyres with no weight and I grabbed that opportunity with both hands. The Civic Type R felt great – to the extent where I almost got on the radio early on and said to the boys, ‘I think we can win this one’, before telling myself, ‘don’t be ridiculous!’ Our car is really strong through the quick stuff, so I knew where I had to attack Huffy but after trying it two or three times, he seemed to have it covered. Then he ran about half-a-metre wide and I got my nose up the inside and thought, ‘gotcha!’ The title may be gone for me, but it’s always satisfying to get a win – especially after such a tough weekend – and I’m chuffed to bits for Honda, Halfords and Yuasa. It was a result that we really didn’t expect here – and just the fillip we all needed.”

Gordon Shedden:
“That clearly wasn’t the weekend we wanted. We knew Silverstone wouldn’t be our ideal circuit, and we struggled with the weight in qualifying. When it’s as close as it was, that really hurts you – just a couple of tenths would have put us on the second row of the grid. Race one was a similar story, which made it tough to progress, but once the ballast was taken out for race two, the Civic Type R came alive. It’s always difficult to gain much ground when the margins are so tight, but we were on the move and I think if we’d had another lap or two, we could have finished even higher. Unfortunately, things ended on a pretty low note in race three. It was like bumper cars out there with some crazy moves being pulled, but I was staying out of trouble until Austin hit me. Although I’m mathematically still just in the title fight, realistically it’s not going to happen this year – but that won’t stop me from pushing flat-out at Brands Hatch to finish the season on a high!”