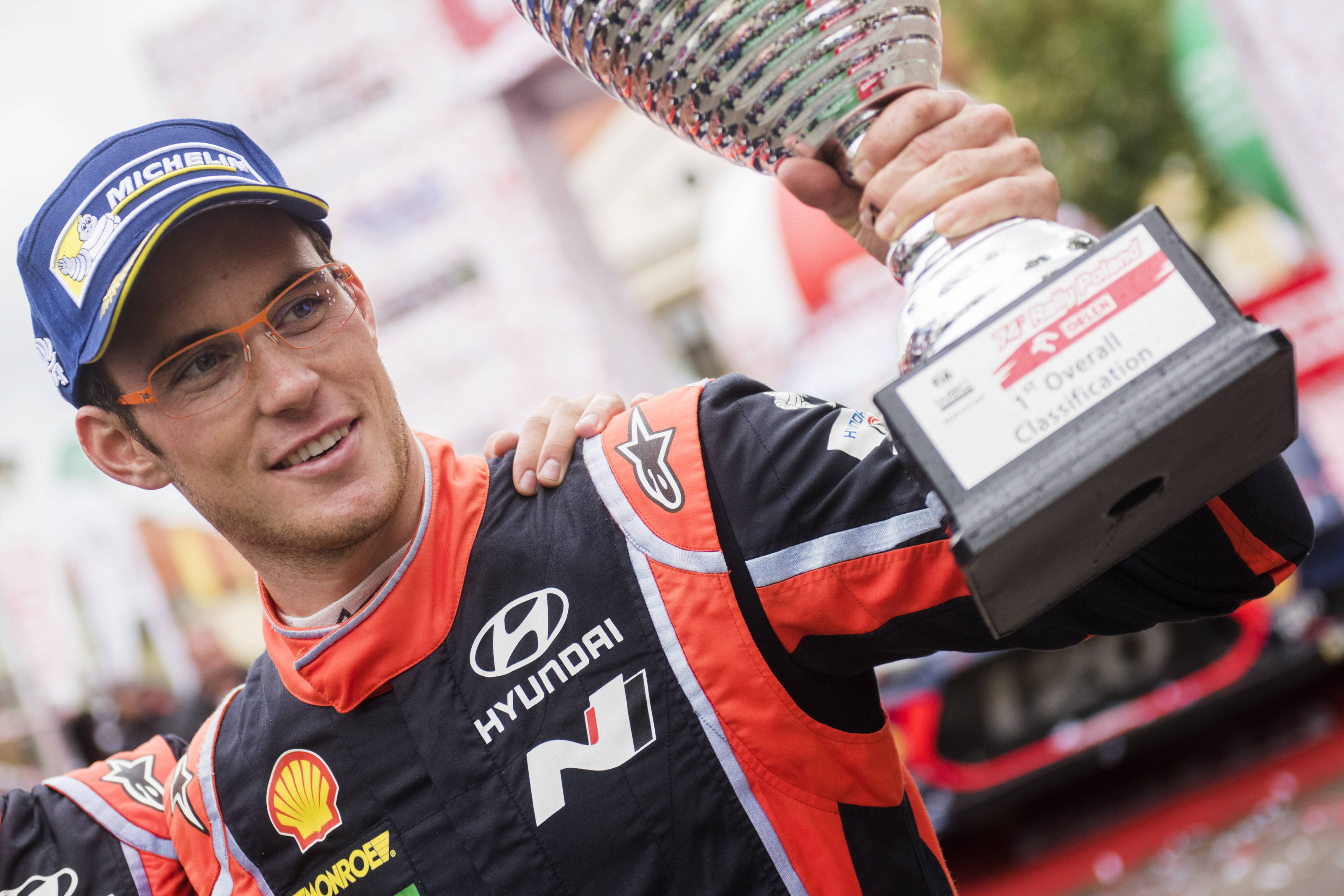 Rally Poland was an event full of drama and incredible action, with insane speeds on wet and slippery roads, and lots of unexpected twists involving every one of the leading contenders.

In the end, Thierry Neuville claimed his third rally win of the season to close the gap to World Championship leader Sébastien Ogier to just 11 points with five rallies to go.

The Hyundai driver’s victory was assured on the second stage of the final day – which had an incredible average of 125kph – when his closest rival Ott Tanak went off and heavily damaged his Ford Fiesta, forcing him into retirement.

Neuville began Sunday’s final leg in front, but a stunning drive through the opening speed test promoted his Estonian rival ahead. But in the next stage Tänak slammed his Ford Fiesta into a tree.

He limped to the finish but the damage was too great to continue. Neuville eased through the remaining kilometres to head team-mate Hayden Paddon by 1min 23.9sec, with Ogier a further 56.9sec adrift in third.

“Ott drove a great rally. In such a fight nobody gives up. I wasn’t ready to give up and was prepared to win,” said Neuville, for whom this was a sixth consecutive podium.

“I was sorry for him and congratulate him on the job he did before he crashed. He was amazing again and one guy who was hard to beat.”

Tänak was chasing his second straight win after claiming a maiden victory in Italy last month. It was the third year he has tasted disappointment in Poland after leading in 2015 and 2016 but failing to secure victory.

“It was the only muddy place in the forest. Maybe I didn’t expect it to be that bad. I hit a bank with the rear and it pulled the front into a tree at high speed. Was I driving too hard? You need to push hard if you want to win,” said a disappointed Tänak.

Paddon ended a torrid 12 months since his last podium. The Kiwi could not match the pace of the early starters on Friday’s rain-soaked and sludgy tracks, but an error-free event combined with several stage wins as conditions improved brought its reward.

Ogier was blighted by a string of problems in his Fiesta, including sliding into a field this morning but the Frenchman persevered to finish 26.6sec clear of Dani Sordo. The Spaniard punctured a tyre but ended 24.4sec clear of Stéphane Lefebvre, who equalled his career-best result.

The WRC’s summer speedfest continues at Neste Rally Finland, the fastest round in the championship, which is based in Jyväskylå on 27 – 30 July.NEUVILL