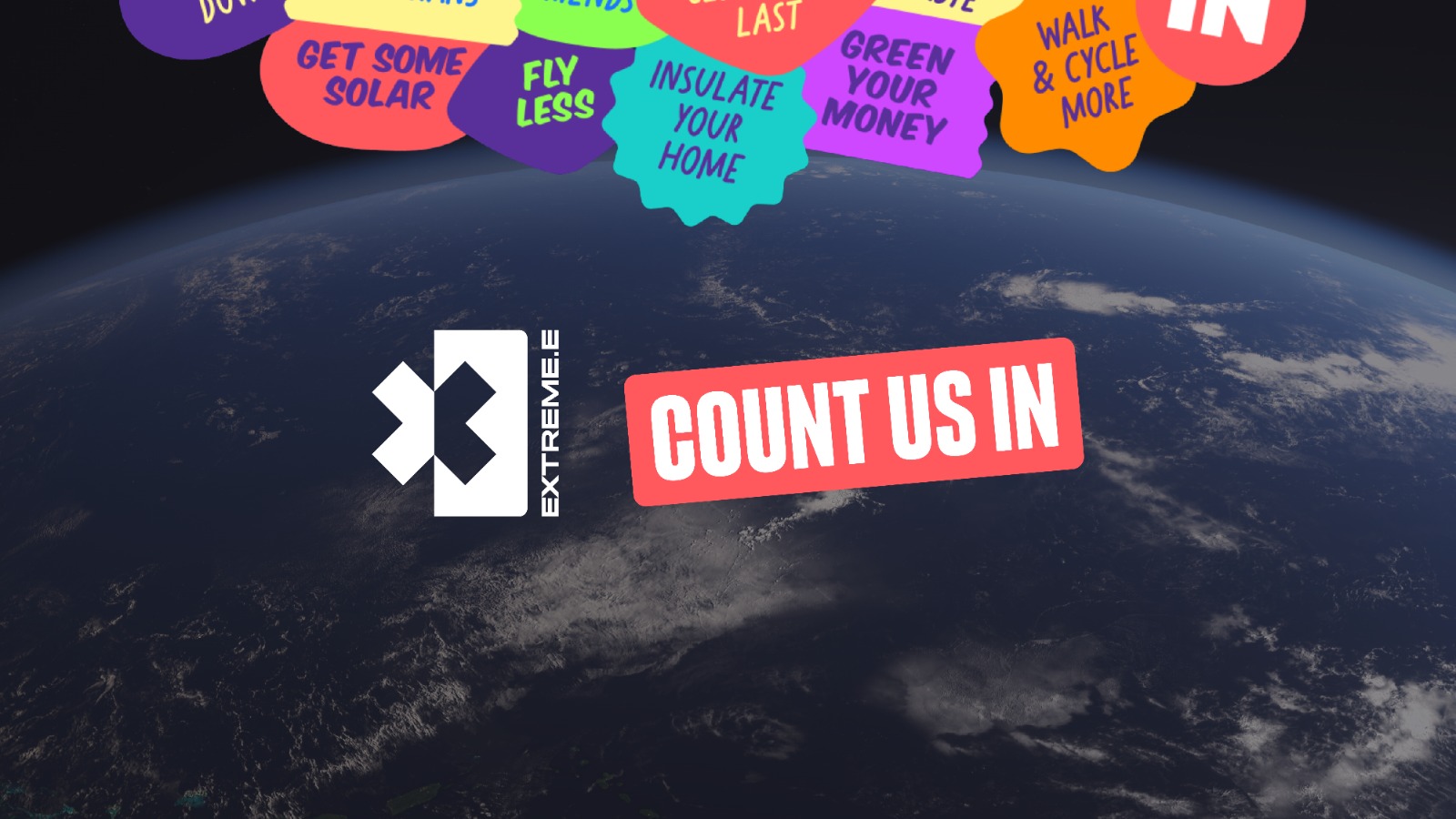 A report released by the Planet League, supported by Extreme E, brings a new term to the fore as sport continues to take action on climate change. Introducing ‘Scope F’.

Scope F is the term to describe the influence sport can exert on fans’ greenhouse gas emissions and climate impact in their daily lives. For some sporting organisations that influence can extend to millions of fans, so Scope F could be significant. The Planet League asserts that this fan engagement could increase climate impact 100x beyond what they can achieve ‘in-house’.

The report highlights examples of how sports are incorporating Scope F strategies into its operations. For Extreme E, having a positive influence on fan behaviour in their own lives is key.

Extreme E, which features electric-off road racing in some of the world’s most remote and challenging environments, aims to; Pave the way to a lower carbon future through the promotion of electric vehicles; Use sport to draw attention to the impacts of climate change, and; Inspire fans, companies and locations in the solutions we can, and must, all be part of.

During its inaugural Season, Extreme E joined forces with Count Us In, a group of global companies united in taking action on climate change.

The Extreme E challenge harnesses the power and excitement of sport to calls on its fans to take real life steps which reduce their carbon footprint and to urge governments, cities and businesses to do more to address climate change. Fans are asked to pledge up to 16 different steps, including to avoid single-use plastic, to walk or cycle more, to eat more plant-based foods, to drive electric vehicles, among other actions. Keeping sporting competition at the heart of its ethos, every time a fan took a step, they attributed it to their favourite team, creating a sustainable championship alongside the racing.

In total, Count Us In’s global campaign has seen over 500,000 people globally pledge to take over 15 million steps, which equates to 170,725,353 kg CO2e Carbon Saving, proving that seemingly small steps are multiplied on a global level, they can have huge accumulative effect.

The concept of Scope F was inspired by Scope X, a term coined by Solitaire Townsend of Futerra, who noted in her TED Talk that Scopes 1, 2 and 3 don’t account for ‘emissions of influence’, or what she calls Scope X.

The report highlights how this is already starting to happen and organisations from several sports have proven that they can positively encourage their fans to make lifestyle changes to reduce their impact on the planet.

Scope F underlines that emissions should not only be seen as “my responsibility” or “your responsibility”, but also as the consequence of lots of influences across society. To unravel this requires a new level of cooperation, which Scope F brings to life.

Ali Russell, Chief Marketing Officer at Extreme E, added: “Sport is the most powerful platform in the world for uniting and exciting audiences. At Extreme E, our entire mission is to harness that power, use it to educate on climate change, and inspire our audiences, which include fans, companies and governments, to change course and make decisions which ultimately lower our impact on the planet. The potential is limitless, but it requires everyone to do their part.

“Recognising Scope F and the influence athletes, teams, sponsors and the media can have on their fans and consumers bigger picture behaviours – whether positive or negative – is a truly exciting development for sports strategists. The better Scope F is understood, adopted and injected into decision making in our industry, the more effective sport becomes as a force for change.”

Tom Gribbin, Co-Founder of the Planet League and one of the originators of the report, said: “Our work centres on encouraging football fans towards positive behaviour change in the name of their beloved team. We believe Scope F is the starting place for football clubs, and other sporting organisations, to think bigger in regard to their influence and reach to tackle the climate crisis.”

The report goes into depth on the rationale behind Scope F, its implications, its economics and case studies. While examining the potential of Scope F in depth, the report makes it clear that sports organisations need to continue to work hard on cutting their Scopes 1, 2 and 3 emissions. Indeed, there is substantial interplay between them and Scope F.

Solitaire Townsend, Co-Founder of Futerra and the originator of the Scope X concept, said: “The negative environmental impact of ‘influence’ is not calculated in traditional scope 1,2 or 3 carbon emissions calculations. As well as radically reducing their own environmental footprints, it is also time for every industry to acknowledge that influencing the individual’s choices (brainprint), is also hugely important in fighting climate change.”

Claire Poole, Founder of Sport Positive, commented: “I have to stress that sports organisations mustn’t lose sight of accounting for their direct impacts, nor leapfrog Scope 1, 2 and 3. That being said, Scope F is a new way for sport to consider their wider reach, and modelling the impact measurement of it could be a gamechanger for our work to encourage sport to increase its action and ambition on climate change.”

Read the full report at www.scope-f.com.