NEXT STOP, THE WORLD FOR PEKING TO PARIS WINNERS 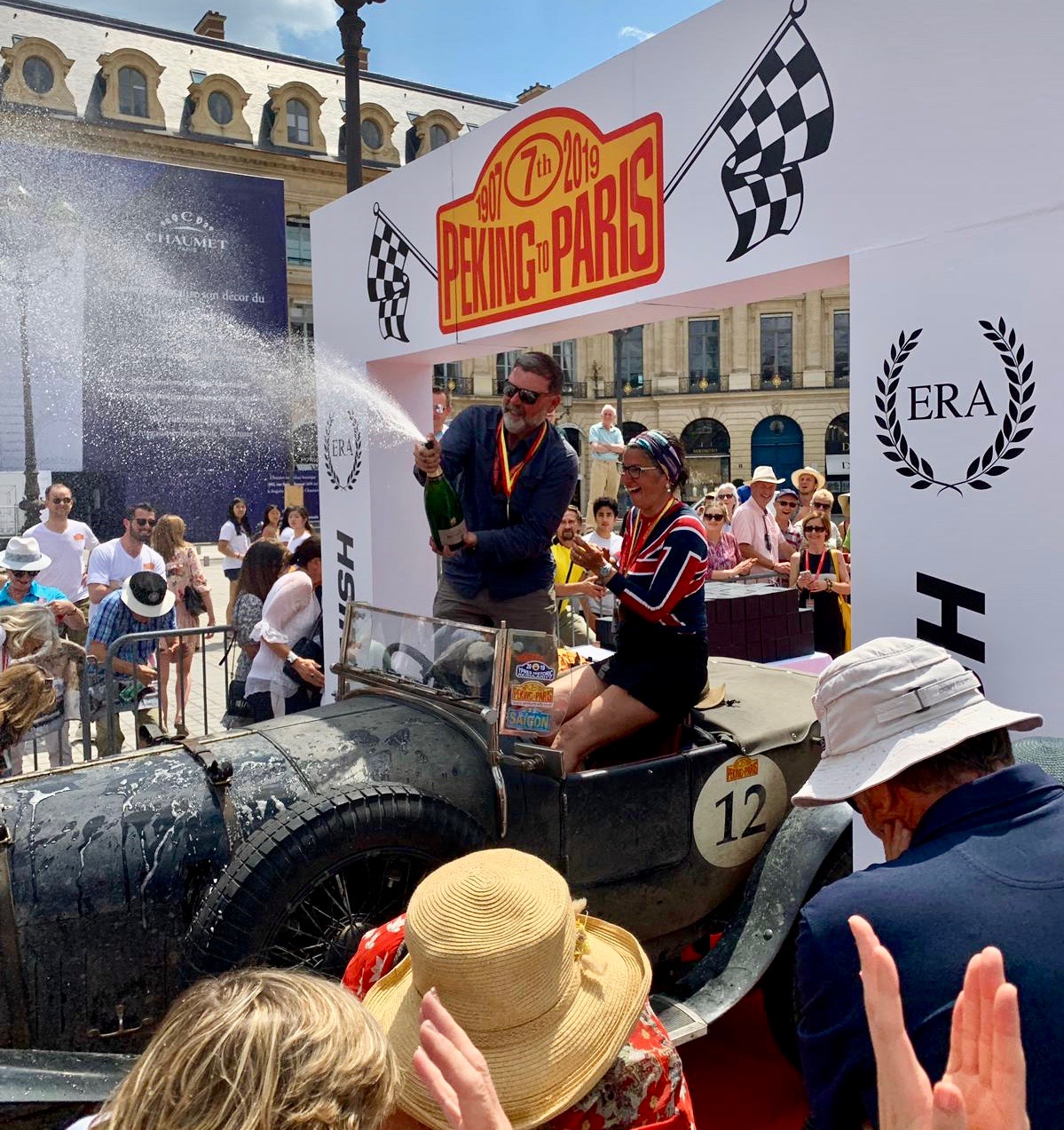 Fresh – or as fresh as you can be after 36 days and 8500 miles in a 1925 Bentley Super Sports – Peking to Paris rally winners Graham and Marina Goodwin are already looking forward to their next, even bigger adventure.

Just days after the hard-earned celebrations in the French capital city, the victorious pair are setting their sights on Rally the Globe’s definitive ‘Round the World’ driving odyssey set for 2020-2021.

Billed as the greatest-ever four-wheeled circumnavigation of the planet Earth, plans for the first ‘Round the World’ rally in a generation were revealed recently at the Royal Geographical Society in London.

Totalling around 22,000 miles (35,000 kilometres), it will be the longest, most challenging and, ultimately, the most rewarding yet staged, eclipsing the distance of the previous event run in 2000 to mark the millennium.

“We are really chuffed to have won the Peking to Paris rally – and it means all the more to be the first ever Bentley winners in what’s Bentley’s 100th anniversary year – but now we are already looking ahead to the once-in-a-lifetime rally we’ve always dreamt of doing: the Round the World which starts next spring,” said Goodwin after driving the road weary Bentley home to Yorkshire from Paris.

“The unexpected roughness of the Peking to Paris route and durability of the Bentley certainly contributed to our success. The harder it got the better the Bentley did – getting the right balance between speed and not destroying the car was the key, particularly on some of the really harsh and long off-road sections in Mongolia of which there were many. Even so, we still broke our chassis!”

Understanding the time constraints of potential participants and mechanical needs of the competing vintage, post-historic and classic cars – all of which must be built before 1976 – the supreme Round the World marathon has been divided into three individual legs: the first from London to Casablanca in Morocco (23 May to 9 June 2020); the second from Boston, Massachusetts to Vancouver, Canada (19 September to 10 October 2020) and finally the third from Vladivostok in Russia back to London (8 May to 19 June 2021). Fittingly the start and finish of such a flagship event will be in Greenwich, site of the Royal Observatory and the Prime Meridian Line (Longitude Zero).

“In many ways the journey from China to France was a warm up for the definitive road trip which comes next,” explained Goodwin who is intending to drive another of his vintage Bentleys on the circumnavigation as the winning Super Sports (number four of just nine built by the factory) is in need of a full rebuild. “I know the roads and tracks being planned for the supreme challenge won’t be as harsh as some of those we have just endured between China and France, however the competition will be intense,” he continued.

Goodwin has a unique insight into what lays ahead as Round the World is being organised by the ambitious new Rally the Globe not-for-profit club of which he is one of the seven founding members as well as Chairman.

As hugely experienced – and now hugely successful – participants in the full spectrum of historic rally events, their individual personal insights and resultant feedback are invaluable in the creation of a rousing portfolio of exciting new adventure rallies, topped by the eagerly anticipated Round the World.

“As enthusiastic participators we know the balance most entrants want between competition, endurance and adventure – that’s crucial when planning these incredible rallies,” disclosed Goodwin. “Moreover, as a non-profit club, we can keep the costs down, the quality of accommodation up and ensure any profits are reinvested into future events.”

In his position of Rally Director, it is the remit of the well-respected Fred Gallagher to create epic voyages to meet the visions of the founders and all those potential participants. Gallagher and his team are constantly reviewing reports from Goodwin and others to ensure the full value of their knowledge benefits future Rally the Globe undertakings.

“Taking into account the scale and challenge of the Round the World mission, we have purposefully chosen smoother gravel roads wherever possible, thus putting the emphasis on adventure and driving pleasure rather than just out-and-out endurance,” he clarified. “It’s also worth pointing out that our route across Asia and Europe will also have little in common with that taken by those on the Peking to Paris – it will also be around 5000km longer.

“We start on the eastern seaboard of Russia and effectively follow the Trans-Siberian Express Railway through virgin rally country. We have also found some fabulous mountain passes in Kyrgyzstan. We want to make this the ultimate circumnavigation of the Earth and we want everyone to enjoy what’s almost certainly a once-in-a-lifetime road trip. An element of competition always adds extra excitement and interest but our primary aim is to see as many crews fulfilling their dreams and returning to Greenwich after 80 memorable days of amazing driving,” asserted Gallagher.

To ensure smooth passage, Gallagher has secured the services of many of the most experienced and well-respected figures in the operation and management of successful global endurance rallies and they are all key members of the notable Round the World organising team.

The new club’s first rally – this autumn’s Carrera Iberia – is already totally sold out and only a few places are now remaining for those wishing to enter the following spring’s Southern Cross Safari set in the game parks of East Africa. Although only announced recently, entries for the complete Round the World rally are also ‘exceeding expectations’ according to Gallagher.

For more information on Round the World as well as the Rally the Globe team and its full event calendar, visit: www.rallytheglobe.com.