O’DONOVAN REIGNS IN THE RAIN AT LYDDEN HILL 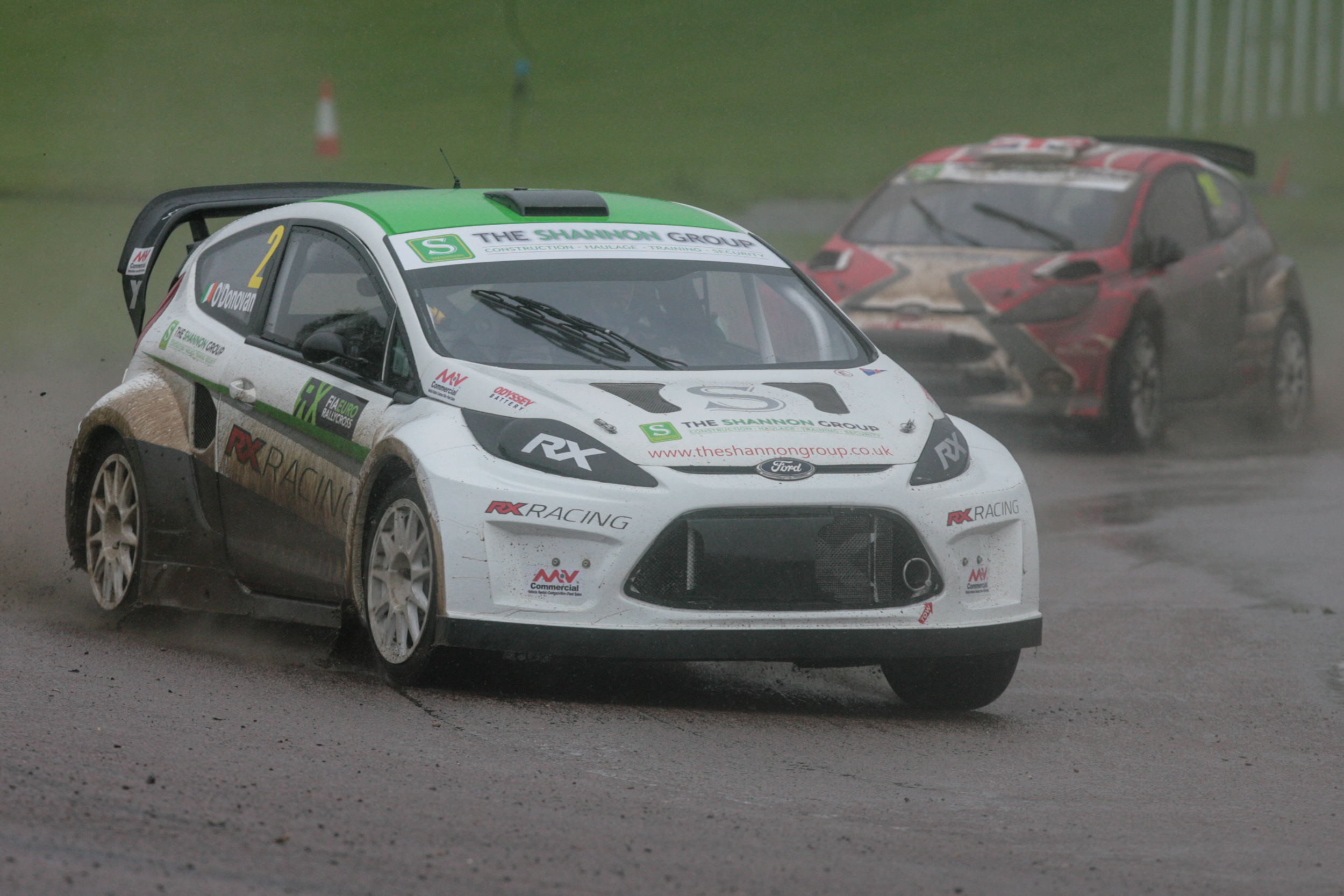 Ollie O’Donovan scythed through the spray to triumph in the penultimate round of the 2015 MSA British Rallycross Championship in association with the Shannon Group at Lydden Hill, leading home Kevin Procter and Andy Scott in a thrilling finish.

In front of a packed Bank Holiday crowd who defied the inclement weather, Procter was on pole position for the MSA Supercar in association with Odyssey Battery final in his Ford Fiesta, joined on the front row of the grid by fellow Fiesta driver Julian Godfrey and the Albatec Racing Peugeot 208 of Andy Scott. O’Donovan was on row two in his Fiesta, with the Citroën DS3 of Lydden Hill owner and former British Champion Pat Doran alongside.

Row three was completed by Andy Grant in his Ford Focus, alongside Steve Hill in his Mitsubishi and ‘B’ final winner Mark Flaherty in another Focus.

With grip at a premium, O’Donovan made a great start to get the better of Procter on the run down to the first corner, with Doran moving into third place as Scott, Godfrey and Flaherty elected to take the ‘joker’ lap from the outset. Doran, Grant and Hill went for their jokers next time around, elevating Godfrey to third ahead of Scott.

Procter was the last of the front-runners to joker and emerged fractionally ahead of O’Donovan, but the Irishman had the momentum and snatched back the lead as the cars headed up the hill towards North Bend, with Scott similarly overhauling Godfrey for third.

Procter made a move on the outside down Hairy Hill on the last lap, but despite having picked up a puncture, O’Donovan held his line – and his nerve – to narrowly secure victory. Scott completed the podium to keep the title fight alive, ahead of Godfrey, Doran and Flaherty. Hill finished seventh with Grant eighth.

Following what was widely acclaimed as one of the most exciting races of the season, barely a second blanketed the top four at the chequered flag. O’Donovan said: “That was a great race to be involved in, no matter who won. Kevin pushed hard and so did Andy, but it is a nice victory to get.”

In the MSA SuperNational class, championship leader Daniel Rooke took the win in his Citroën AX, heading home Gareth Wood in his Ford Ka. Gary Simpson drove well to claim third in his BMW M3, with the day’s conditions making matters tricky for the rear-wheel-drive exponent. Mike Howlin made the long trip from Wales and took fourth, with Steve Cozens bringing his Renault Clio into fifth.

In the MSA Juniors, Drew Bellerby did her championship chances no harm at all by triumphing over Bradley Durdin. Thomas Constantine took third with Jennie Hawkes securing fourth.

The RX150 Buggies witnessed a great duel between FIA World Rallycross Championship presented by Monster Energy front-runner Reinis Nitiss and British title protagonist Marc Scott that went right the way to the flag. Scott got the better start, but Nitiss – who was one of the stars of the day at Lydden – pushed all the way. Championship leader Chrissy Palmer maintained a narrow advantage in the overall standings with third, with Kevin Feeney finishing fourth and Andrew Coley – normally behind the microphone covering World Rallycross – in fifth.

Swift Sport saw another captivating battle, with well over 20 cars entered on the day. Local favourite and champion-elect Tristan Ovenden just held off fellow Kent driver and title rival Darren Scott to win, with Aidan Hills taking third following a superb scrap. Dave Ellis was fourth with Nathan Heathcote fifth. MSA General Secretary Simon Blunt thoroughly enjoyed his day at Lydden in a Swift, saying: “It’s the best fun in racing I have had for a long time – so tricky to get right, but immense fun!”

The Super1600 category was won by Craig Lomax with Michael Boak second – both driving Citroën C2s – while in the BMW Mini class the spoils went to Keifer Hudson, with brother Kris taking second.

Tomasz Marciniak in his Citroën Saxo was the Hot Hatch king, heading home the similar car of John Lyne. Third went to Adam Trzonkowski as he completed a Citroën top three, whilst in Retro Rallycross, Rob Gibson took victory in his MG Metro 6R4.