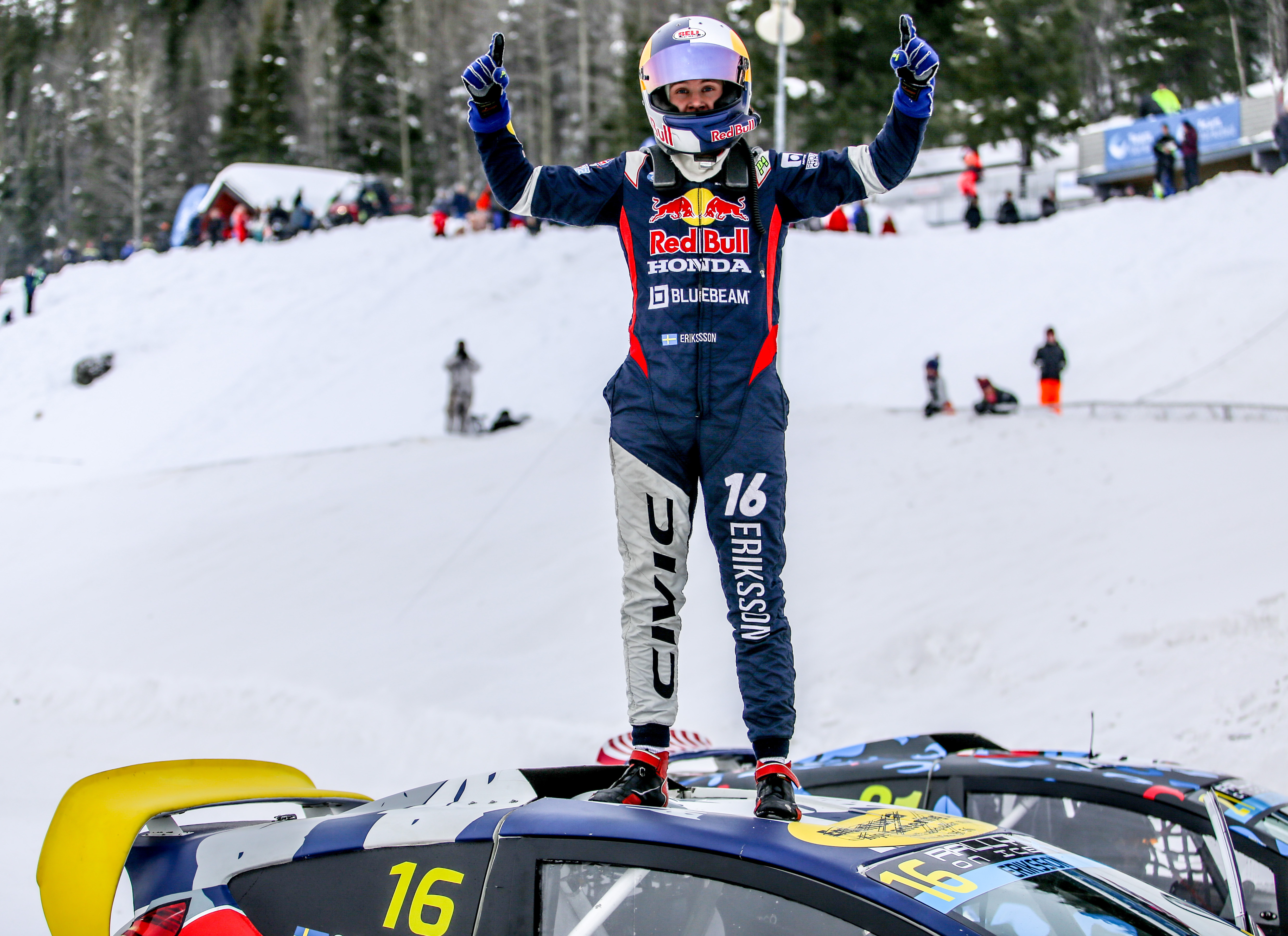 Oliver Eriksson arrived at Gol for the eagerly-anticipated RallyX on Ice finale last weekend at the top of a tight three-way title tussle. He left again having clinched not only his second victory from four starts, but with it the coveted crown.

There appeared to be nothing to choose between the younger of the Eriksson siblings and the local hero through the qualifying stages, as they tallied two victories and a runner-up finish apiece to each earn pole position for their respective semi-finals.

That, however, was where their fortunes diverged. While Eriksson dominated his semi-final, a sluggish getaway for Evjen left the Norwegian with too much to do. Despite his best efforts, he missed out on a spot in the all-important final – ensuring his Swedish rival sewed up the spoils with one race still to run.

“It was a good day,” reflected 19-year-old Eriksson. “I was nervous going into it – there were three of us in contention for the title, and since the last round at Ål, I’d been going over every possible scenario in my mind of how the day might unfold – but as soon as we got the first heat out of the way, I relaxed a little more.

“I had some really enjoyable fights and came close to scoring maximum points, so I’m very happy. I knew that the sooner I could wrap it up, the better it would obviously be and it was great to seal the deal in the semi-final so I could just focus on going out there and enjoying the final.”

Enjoy the final Eriksson certainly did, outgunning the pole-sitter away from the lights and leading throughout – although to do so, he had to soak up sustained pressure from a charging Alexander Westlund, the day’s top qualifier and the only man to take a clean sweep of heat race triumphs. The elder Swede’s bid for glory was extinguished when a penultimate lap challenge ended in a snow bank, promoting Conner Martell to second.

A win in Q1 set the American up for a very good day at the office indeed, with the runner-up spot in his semi-final firing the Vermont native into the final for the first time since the Östersund curtain-raiser last month – and on this occasion, with a rather happier ending.

“I’m really pleased to finish up on the podium, especially in the last round,” Martell enthused. “We’ve shown good pace throughout, but we’ve had some bad luck and consistency has been lacking. We pulled it all together here, though.

“This track is definitely my favourite of the four we’ve visited in RallyX on Ice; the first turn is so fast, and you can just send it into the corner, which is a lot of fun. The surface got super-rough as the day progressed, too, which made it even more challenging.”

The rostrum was rounded out by Jimmie Walfridsson, although the Swede’s day was not without its dramas. A win and second place in the heats hinted at his raw pace, but he came off worse in a disagreement with a snow bank in Q2 and had to overhaul Vasiliy Gryazin in the semi-final to make the last six.

The 27-year-old subsequently found himself pitched into a spin following contact with Westlund in the final, but he was able to rejoin and take advantage of his countryman’s late ‘off’ to mount the bottom step of the podium.

“This is a big result for me,” Walfridsson acknowledged. “It’s only my first year driving in Supercar Lites, and I genuinely didn’t expect to be up here so soon. The closing laps got so crazy that I didn’t actually know I’d finished in the top three until I crossed the line and my spotter told me – I honestly had no idea! We struggled a bit through the first three rounds, but I seem to be getting the hang of this now…”

In a race of attrition, Kevin Eriksson recovered to fourth at the chequered flag, paying the price for an early error in the final after tallying a trio of runner-up finishes in the heats and a comfortable semi-final success. The Swede nevertheless still did enough to seal second position in the points table ahead of Evjen.

OMSE stablemate Cole Keatts wound up an impressive fifth, although the American teenager was frustrated as he felt the podium had been within his grasp. Having narrowly missed out on the semi-final in the previous three rounds, Keatts not only made it through at Gol – courtesy of a mature Q3 victory – but he went on to finish second, thereby earning himself promotion to the final.

The Idaho native – the youngest driver in the Supercar Lites field at just 16 – then made a meteoric getaway from the back row of the grid and boldly attempted to go all the way around the outside into Turn One for the first time, very nearly snatching the lead. Although his ambitious move didn’t quite come off, he was still firmly in the mix for a top three finish when he found himself delayed by the Westlund/Walfridsson clash, restricting him to fifth.

Westlund was classified a disappointed sixth, whilst other ‘hard luck’ stories could be told by Ben-Philip Gundersen and Vasiliy Gryazin. Competing on home soil, the Norwegian won in Q2 and finished second in his remaining two heats to secure a front row starting spot for the semi-final, but that was where his challenge ended. The Latvian was similarly quick throughout, but one qualifying race victory was offset by two first corner incidents and despite a valiant effort, he ultimately fell short of progressing to the final by less than a second.

Jami Kalliomäki maintained his positive recent momentum with a solid performance that saw him get to within three-quarters-of-a-second of pinching Martell’s place in the final, while Alexander Lie played home advantage with a runner-up finish in the heats – although a scrappy semi-final would curtail his charge. Ål winner Robin Larsson was unable to replicate his form from six days earlier, despite pushing Oliver Eriksson right the way to the flag in Q2.

Behind the wheel of the Team Penske-liveried car, finally, Hélio Castroneves might not quite have made the semi-finals on both his rallycross and ice racing debut, but the three-time Indianapolis 500 winner revealed that it had been an ‘incredible experience’ as he went literally doorhandle-to-doorhandle with some of the finest drivers in the discipline.

In the supporting RX Academy on Ice, Gol played host to a sensational duel for the crown between Finnish hotshots Jesse Kallio and Joni Wiman. With the nerves perhaps beginning to kick in, the season’s two pace-setters uncharacteristically began the final from the second and third row of the grid respectively. To add to the intrigue, their tactics immediately differed when the lights went out as Kallio advanced a spot and Wiman went for the joker, but after finding himself stuck in an evenly-matched queue squabbling over second, Kallio later fell prey to a charging Marko Muru.

When the younger Finn served his own joker on the last lap, Wiman snuck through to finish fourth with his compatriot sixth. That left them tied on points in the overall rankings, but Kallio lifted the laurels by dint of a greater number of victories. Amidst all the drama, it was another Finn – 15-year-old Sami-Matti Trogen – who took the chequered flag first after withstanding a late attack from impressive Estonian teenager Muru, one year his junior. Former French Rallycross Champion Firmin Caddedu joined them on the rostrum in third.

In Speedcar Xtreme – for potent 150bhp, 312kg crosskarts – there was similarly a title fight to be settled, as age took on youth in the shape of two-time race-winner Finn Erik Løberg versus 2016 FIA European Rallycross Champion Kevin Hansen. Unfortunately, their battle did not run all the way to the end as the Norwegian became lodged in a snow bank on the opening lap of the final, meaning second place for 19-year-old Hansen was more than sufficient to secure the spoils.

The race was won by home hero Ole Henry Steinsholt, who rocketed into the lead from the second row of the grid at the start and thereafter never looked back. In a tumultuous encounter, Linus Östlund was the only remaining finisher in third, as contact between Timmy Hansen and qualifying king Aleksander Wiik removed both drivers from the reckoning on lap four.

“What a way to conclude the RallyX on Ice campaign!” enthused Olsbergs MSE CEO Andreas Eriksson, the man behind the exciting winter sport concept. “Going into the weekend, there were mouth-watering battles in prospect in all three categories – and each of them delivered drama, excitement and some outstanding wheel-to-wheel racing, probably the best we have seen all season.

“Congratulations to Oliver, Jesse and Kevin on their success – in every case, it is richly deserved after conquering not only their rivals but also some very tough conditions along the way – and it was fantastic to see Hélio out there and clearly having such a great time. Like Josef Newgarden last week, he really brought his passion and enthusiasm to the event and embraced everything that RallyX on Ice is about. Maybe we will see them back again next year…”