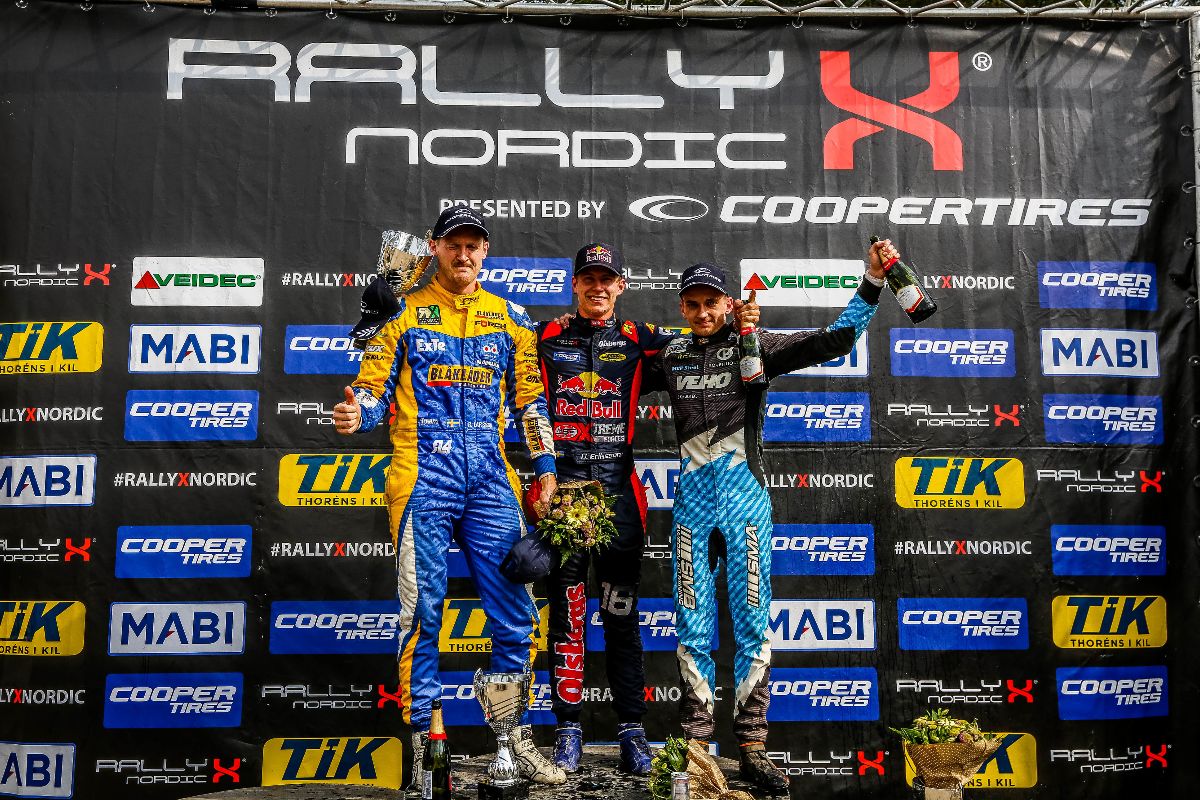 Nysum’s blend of fast, flowing corners, figure-of-eight layout and bridge/jump combination makes it one of the most popular tracks on the calendar for fans and drivers alike, and this year, it delivered crowd-pleasing action throughout, from the headlining Supercar class to the Supercar Lites, RX Academy and CrossCar support series.

Oliver Eriksson picked up from where he had left off at Höljes in the Supercar category, making it two wins out of three races and extending his advantage in the title standings over the chasing pack. The young Swede piloted his Olsbergs MSE Honda Civic from pole position to a commanding victory in the final, despite failing to set the fastest time in any of the qualifying rounds.

“I had a great launch and whilst I saw [Jere] Kalliokoski was challenging me on the outside, he braked early so I kept control and took my line on the inside,” the 20-year-old commented. “From there, I just tried to drive a clean race and not get over-excited – and in the end, it worked out.

“The start of the season is going incredibly well, so let’s hope that continues. I’ve pulled a bit of a gap in the championship but it’s still early days – we haven’t even reached halfway yet, so we’re going to keep pushing for wins!”

Robin Larsson – the initial pace-setter – pressurised Eriksson all the way to the chequered flag but struggled to properly challenge and ultimately had to settle for the runner-up spot, a great result considering he had been excluded for overtaking under yellow flags in the second qualifier.

Kalliokoski took the final step on the podium with another consistently quick run in his Ford Fiesta. The Finn showed impressive pace throughout to line up on the front row of the grid for the all-important final, but Larsson snuck up the inside heading towards Turn Two on the first lap, relegating Kalliokoski to third.

After dramatically crashing out of practice, and his car then catching alight, Philip Gehrman miraculously recovered to place a respectable fourth overall. Peter Hedström and Andreas Carlsson were classified fifth and sixth respectively, although neither driver made it to the finish line.

Danish native Ulrik Linnemann certainly had the support of the crowd at Nysum, but his efforts to repeat his win from last year were curtailed when contact with Hedström in the early stages of the first semi-final unfortunately forced him to retire.

Support Series: Changing of the Guard

The Supercar Lites category saw a changing of the guard, as Ben-Philip Gundersen recovered from a puncture in Q4 to take the win ahead of Linus Östlund – and with it, the championship lead. The Swede similarly regrouped from retirement in Saturday’s first qualifier to make it through to the final – and ultimately, onto the podium. Jimmie Walfridsson completed the rostrum in third, ahead of Anders Michalak, Simon Olofsson and Sondre Evjen.

“Its been a really good weekend. We had some ups and downs, but in the end we were fastest, so I’m really, really happy with that” commented Ben Philip Gundersen.

After his success in the opening rounds at Höljes, Thomas Holmen posted some good results in qualifying but was hampered by alternator and power steering problems in Q2. The Norwegian teenager failed to make it to the final after narrowly missing the cut with a fourth place in his semi-final. Countryman Evjen was another championship front-runner to struggle, finishing seven seconds off the pace in the final.

Rasmus Tuominen was the dominant force in the RX Academy at Nysum, the Finn winning every race he started. Tommi Hallman gave chase for most of the day but eventually had to settle for the runner-up spoils, with Höljes winner Marko Muru completing the podium.

An elated Isak Reiersen celebrated CrossCar victory after a tight battle with Jimmie Österberg and Søren Jelsbak. Nils Andersson – the man to beat two weeks ago in Sweden – could only manage fourth place in Denmark.

The next stop on the RallyX Nordic calendar will be Riga’s Biķernieki National Sports Base in Latvia on 20/21 July, for round four of the championship.