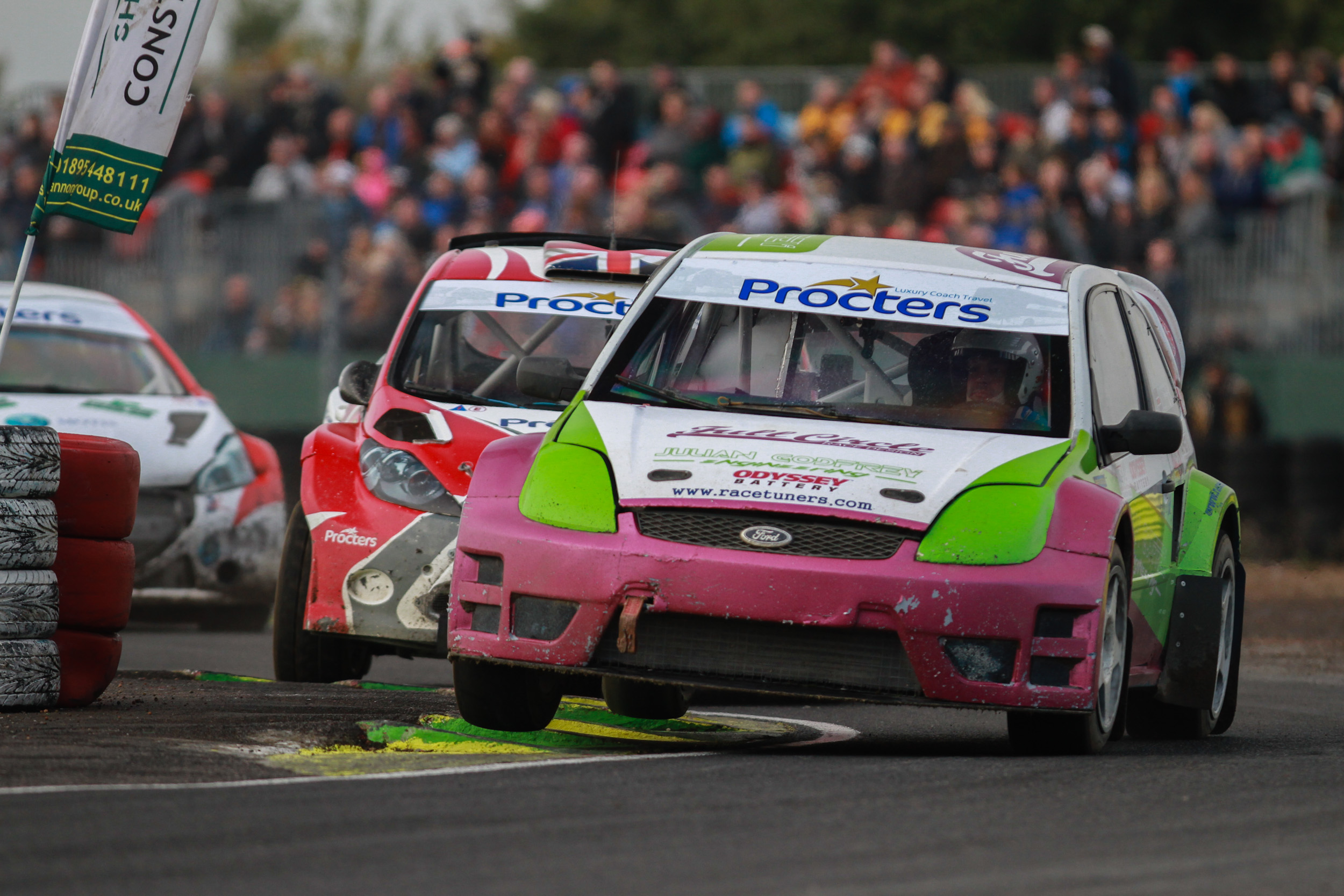 Kevin Procter won the final round of this season’s MSA British Rallycross Championship in association with the Shannon Group at Croft, heading home the Peugeot 208 of Albatec Racing boss Andy Scott by just over two seconds as Julian Godfrey clinched the drivers’ crown for the fifth consecutive year.

Local star Procter was on pole position for the all-important six-lap final, with Scott and Andy Grant joining him on the front row of the grid. From the lights, the Yorkshireman took the lead from Grant, with Scott and Godfrey battling over third. From here, Procter was able to keep his advantage over Scott right the way to the flag.

Procter commented: “It’s been a good day, and great to win close to home. It was a great race with Andy and congratulations to go to Julian for another title.”

Godfrey, the 2015 British Rallycross Champion, added: “It’s great to win the title again and get on a par with Dermot Carnegie. It has been a hard day here at Croft but we are delighted with the win.”

In the MSA SuperNationals, it was Daniel Rooke that was crowned champion in his Citroën AX, but the new champion did not win the class. He finished third, just behind fellow title contender Gareth Wood in his Ford Ka. The honour of victory went to the Lotus Exige of Paige Bellerby, who in so doing became the first female racer to win a SuperNational event outright. The trio had occupied the front row, but it was Bellerby that made the better start and took the lead to head home the championship protagonists. Gary Simpson brought his BMW E30 home in fourth with David Ewin fifth in the Ford Fiesta.

In MSA Juniors, after a season-long battle Drew Bellerby and Bradley Durdin arrived at Croft tied on points, leaving it all to play for. It was a great race with Durdin coming out on top to pip Bellerby to the post. Jack Leese was third with Jennie Hawkes taking fourth.

The Swift Sport race was run twice, with the original attempt halted following contact between Aidan Hills and Darren Scott. At the re-start, it was Tristan Ovenden that took the win to secure the 2015 title. He headed home Nathan Heathcote by just over a second, with Jake Taylor rounding out the podium places in third. Rob Maynard ran well to finish fourth with Jack Brown fifth.

The RX150 Buggies were full of interesting entries, with the added attraction of FIA World Rallycross Championship star Andreas Bakkerud and former British Rally Champion Ryan Champion as well as a late entry from Dave Bellerby.

The battle was on between Chrissy Palmer and Marc Scott, who have entertained all year. Palmer was on pole with Bellerby in the middle and Scott on the outside. Palmer got the better start to lead Scott all the way to the flag, with Bellerby taking the final podium place in third. The result left Palmer as the 2015 champion with Scott only narrowly missing out.

The HotHatch category was won by Tomasz Weilgoz in his Peugeot 106, as he headed home Adam Trzonkowski in the Citroën Saxo, with Robert Potyra in a similar car third. The victory for Weilgosz cemented his 2015 championship title.

The BMW Minis were won by Keifer Hudson, who defeated John Clayton by over ten seconds with Martin Hawles third. David Bell and Kris Hudson actually headed these three on the road, but were trying supercharged versions and were not classified.

Super 1600 was won by Jack Thorne, ahead of Phil Chicken and Michael Boak.

Julian Godfrey made it cause for a double celebration at Croft by adding the prestigious Procter’s Coaches MSA British Rallycross Grand Prix to his British title with a masterful drive.

Godfrey headed home the Peugeot 208 of Albatec’s Scott, who became involved in a great battle for second with the Ford Focus of O’Donovan, who eventually had to settle for third.

Fourth went to the Ford Focus of Grant, with Steve Hill bringing his Mitsubishi Evo home in fifth. One of the most impressive drives of the day, however, was from 2015 SuperNational Champion Rooke in the Citroën AX as he took sixth.

Harris in the Citroën DS3 and Phil Chicken in the Citroën Super 1600 were seventh and eighth respectively. Multiple British Champion Pat Doran suffered repeat gearbox issues and was unable to finish.

Godfrey was on pole thanks to a string of fastest heat times, with Scott and O’Donovan joining him on the front row. The newly-crowned British Champion took the lead and was never headed over the six-lap final. Scott and O’Donovan were embroiled in a great tussle for the runner-up spot, which kept the large Croft crowd enthralled as the duo got very close on occasion.

Rooke won the award for best front-wheel-drive on the day, impressing everyone with his pace in the final.

“It has been the perfect end to our weekend, and I am really pleased to take the Grand Prix title again,” reflected Godfrey. “The racing has been superb here and we are heading home very happy.”

Scott, who finished runner-up once again, added: “Yes, it would have been nice to win, but Julian drove well and I had a great battle with Ollie all the way to the flag.”

O’Donovan was pleased with third place, and later commented: “The car has not been perfect all weekend, but today I was able to battle and enjoy it too, so all-in-all not a bad day for us.”

Bakkeud, who hails from Norway, commented: “It’s been great here at Croft all weekend, it has been so much fun. To win was good, and it was a great battle yesterday and today with Dave and Ryan. I would love to come back – it’s a great championship and really enjoyable.”

Second-placed Bellerby added: “It’s been great for British Rallycross to have someone like Andreas here this weekend and Reinis [Nitiss] at Lydden, and big thanks have to go to Ollie [O’Donovan] for getting them to come. It has been good for the sport and the racing this weekend was spot-on.”

Fellow Yorkshireman Champion similarly enjoyed the weekend and admitted that it was good to be back in the driving seat: “What a really good weekend it has been, and third is a good result. There were a lot of spectators here today and I am sure they enjoyed the racing.”

The award for best rear-wheel-drive went to Paige Bellerby in the Lotus, an accolade she was able to add to her victory in the SuperNational class from Saturday.

Retro Rallycross was won by Ray Morgan in the Ford Escort BDA, and he headed home Darren Grimston in the Vauxhall Nova with Dave Black third.