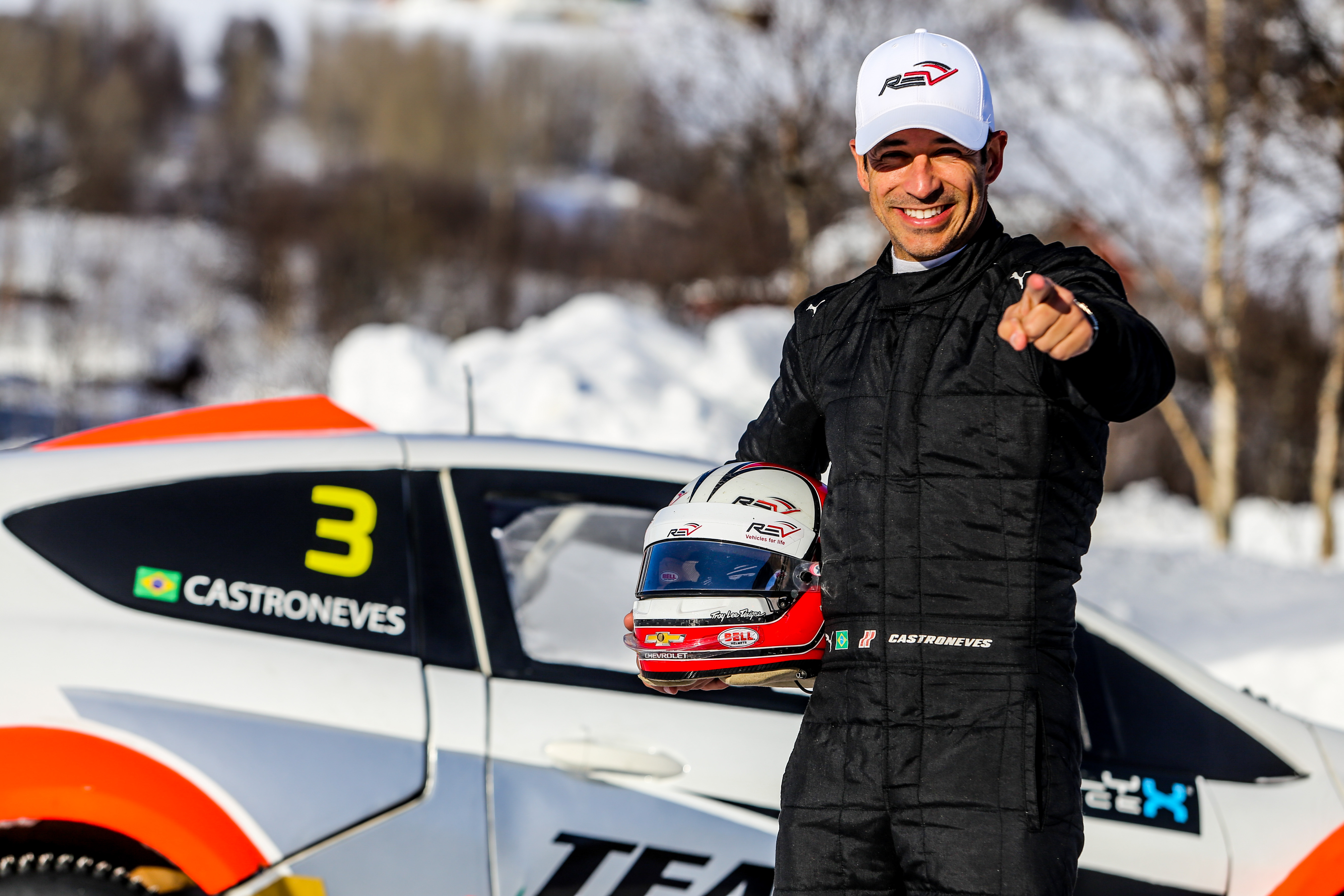 Three-time Indianapolis 500 winner and all-round motorsport royalty Hélio Castroneves has decided to step out of his comfort zone this coming weekend as he tries his hand at RallyX on Ice for the first time – and the Team Penske star reveals the experience is already ‘so much more than I was expecting’.

A far cry from his 16 full seasons of open-wheel competition in the Verizon INDYCAR Series and his current ride in the Prototype class of IMSA’s WeatherTech SportsCar Championship, RallyX on Ice represents a whole new challenge for one of the most popular and versatile drivers in the sport. We caught up with him after his practice runs in Norway yesterday (1 March) to see how he’s finding it so far…

Hélio, you’re here at Gol in Norway this weekend for your first taste of rallycross action, and to make it even harder for yourself, you’ve chosen to do it on ice, too! You spent some time testing yesterday – how did that go?

I can’t stop smiling! First of all, it’s an awesome opportunity to do something that I never, ever thought I would do – not only driving a rallycross car, but doing so in the snow! I’m very thankful to Andreas [Eriksson – Olsbergs MSE CEO] for inviting me. Man, it’s cold outside, but I’m already having so much fun. Everybody has been helping me out and giving me tips on how to go sideways; if you want to turn left, you actually have to turn right – everything is the opposite! Also, every time you brake, the car slides all over the place. It’s a lot of fun, so let’s see what’s going to happen…

It is a touch chilly here. As a Brazilian, that must be a bit of a shock for you..?

We’re talking about -20°C, -25°C – this is brutal for me! Every time I go out in the car, I have to come back in after five laps because my feet and hands are frozen. Being from Brazil and living in Florida, I don’t think the snow is a natural fit for me… Man, though, this is so much fun – so much more than I was expecting. The regular guys are fast – I’m looking forward to going racing against them!

For somebody that has driven so many different cars over your career, from open-wheel to sportscars, how different does this feel? How difficult was it to adapt at first?

The learning curve starts with the track, which is built on two-and-a-half feet of ice. The tyres have studs too, so every time you go into a corner, you have to try to get onto the power so that you have more grip. The track changes constantly as more cars pass by; that makes it a never-ending challenge, but a really enjoyable one. Every lap is different, which is why these drivers are so incredibly talented – you’ve got to be ready no matter what. The good news is, if you crash, you’re only going to hit a snow bank, so it doesn’t create any damage…

Your Team Penske team-mate Josef Newgarden took part in RallyX on Ice last weekend. Has he offered you any words of advice?

I was texting him, and he said, ‘you’re going to suffer in the cold weather’ and he was right – I’m suffering! I spoke to Austin Cindric too, and he gave me some tips. It’s funny, though – even when somebody tells you something, you don’t truly appreciate the difference until you actually get out there and start driving. It’s a real experience. If you have the desire to drive one of these cars in the snow, I can tell you, it’s absolutely incredible! I can’t wipe the smile off my face! I’m having a great time, and I can’t wait to see what it’s like with all the other guys on-track too and the crowd watching on. That’ll be even more fun.

As you say, you are here to have some fun, but ultimately, every racing driver is fiercely competitive. What’s your goal for the weekend?

Of course, I’m a little bit – and when I say a little bit, I mean a lot – out of my comfort zone here. This is my first time ever driving a rallycross car, and not only that but in the snow, so my expectation is to hopefully stay with the pack and not end up in a snow bank! If you get a good start, you can see clearly in front of you. That’s something else – people don’t realise that when you’re behind in this series, you can’t see a thing. It’s like driving in the rain when you have all the spray kicking up in your face. The goal is to try to stay with the other guys and learn as much as I can and hopefully, I won’t do that badly…

Castroneves will take to the track in anger alongside many of the finest rallycross drivers of the current generation at Gol in Norway tomorrow (Saturday, 3 March). The racing action will be streamed live from 12h00 GMT on both Motorsport.com and SBF Play, and televised live by Swedish national public broadcaster SVT.