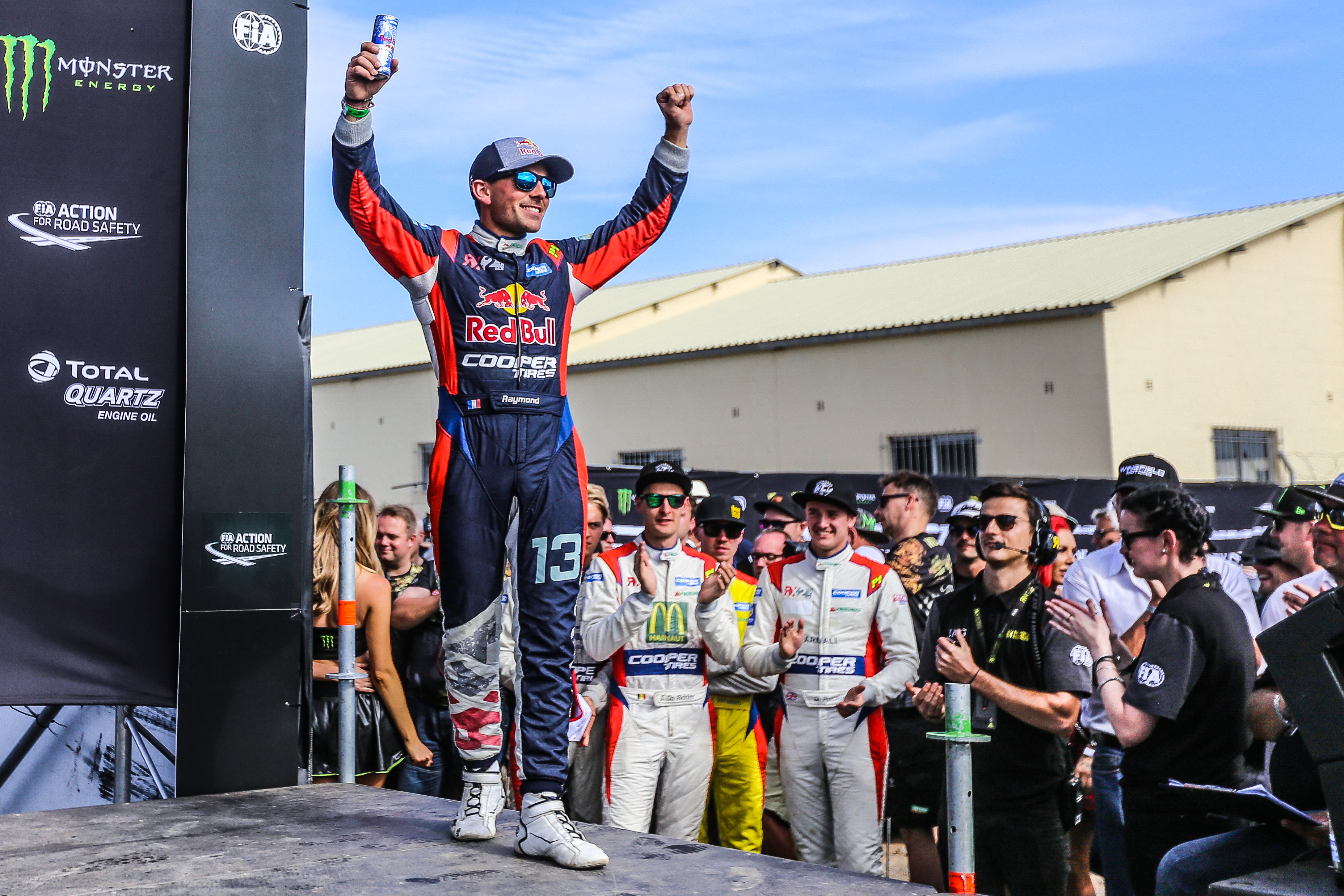 Cyril Raymond completed a sensational season in the RX2 International Series presented by Cooper Tires with a hard-fought victory at Killarney International Raceway this weekend (11/12 November), as South Africa played host to a pulsating finale that served up lap after lap of spectacular high-octane action.

He might have been unquestionably the man to beat this year in the official FIA World Rallycross Championship feeder series, but Raymond found himself with a real fight on his hands in Cape Town and had to dig deep to overcome the challenge posed by JC Raceteknik rival Guillaume De Ridder, who dominated Saturday’s Qualifying Races.

The Belgian looked to be on-course for a fourth straight runner-up finish, only for engine woes to dash his hopes in the final and elevate his team-mate Sondre Evjen into second place. Tanner Whitten joined the young Norwegian on the podium in third after surviving a wild spin when he was tagged on the opening lap of Q4.

Gumtree World RX of South Africa was very much a weekend of two halves as far as the Qualifying Races were concerned, with De Ridder proving to be peerless on Saturday as he impressively took a clean sweep of fastest times – meaning that for the first time since Mettet back in May, a different name topped the RX2 Intermediate Rankings at the close of day one.

After uncharacteristically jumping the start in Q1, Raymond was playing catch-up, but the Olsbergs MSE star really turned up the wick on Sunday and allied to a double dose of misfortune for De Ridder – with contact from behind in Q3 and minor wheel damage in Q4 – his results vaulted the Frenchman to his habitual position at the summit of the standings.

From pole position in Semi-Final 1, Raymond led into the first corner as a squabble behind gifted him a sizeable margin. It was Rooke that emerged from the mêlée in second, with Olofsson third and Evjen dropping to fourth. The Norwegian subsequently found himself having to fend off fast-starting compatriot Thomas Holmen over the opening lap before electing to take an early joker. It was a tactic that would pay off richly.

As Raymond raced clear to a runaway success, Evjen’s eye-catching pace enabled him to leapfrog both Rooke and Olofsson when they jokered, the latter paying the price for getting his car up on two wheels as he pushed hard in an effort to stay in front. The Swede ultimately missed out on the final by less than two seconds, while behind, Holmen and Syversen waged their own entertaining duel over fifth, exchanging places twice on the last lap before the older of the two Norwegians eventually prevailed.

In Semi-Final 2, De Ridder held his ground at the start as Gryazin got the better of Whitten and Michalak for second and Bäckman and Nilsson disputed fifth. Whitten jumped Gryazin after both had served their jokers, following which he unleashed a scintillating turn-of-speed as he endeavoured to hunt down De Ridder, closing to within three-quarters-of-a-second by the time the chequered flag fell. Michalak got the best of a tooth-and-nail scrap with countrymen Nilsson and Bäckman for fourth.

Raymond led away at lights-out, with De Ridder doing well to save a slide through Turn One after receiving a tap. The Belgian had to fight hard to fend off the attacking Whitten, but it all became academic when the red flags flew on lap two after Rooke’s world turned upside-down – quite literally. The Briton clipped the tyres at the chicane, pitching him into a dramatic roll from which he thankfully emerged unscathed.

The recently-crowned champion got the jump again at the re-start, as De Ridder slotted in behind and Gryazin took advantage of Whitten and Evjen battling to sneak through to third. As dust clouds billowed all around the circuit, Raymond made good his escape and De Ridder similarly settled into second until he suddenly stopped on the penultimate lap with engine issues.

His loss was Evjen and Whitten’s gain. The pair both used early jokers to get some clear air, and that paid dividends as they overhauled Gryazin to snare the remaining rostrum positions. All three podium-finishers stopped after the chequered flag to perform celebratory donuts, to the palpable delight of the enthusiastic crowds thronging the circuit grandstands.

Cyril Raymond (1st): “It’s been an amazing weekend to cap an amazing year – there’s no better way to end a season than with a victory. It was fantastic to see so many people at Killarney and so much passion and support in the grandstands. It was an absolute pleasure to be here and everybody gave us an incredible welcome. With the title already won, I really wanted to finish the season in style with one last victory – as a competitor, that’s always the goal – although things didn’t begin too well when I jumped the start in Q1, which was a first for me in this category! After that, I had to battle my way back, but it wasn’t easy because Guillaume [De Ridder] was driving perfectly; he has been a formidable rival all year, and if he returns in 2018, he will be a real threat. We were on the back foot at the end of the first day, but we remained confident because we knew we had the pace and we quickly rediscovered our rhythm in Q3. The boys at Olsbergs MSE worked really hard and provided me with the tools I needed to do the job like they have done all year, and my spotter ‘Scooter’ gave me perfect guidance throughout, so this result is for all of them – we win together. I’ve thoroughly enjoyed my experience in RX2; there has been a lot of respect between all the drivers all season both on the track and in the paddock, and it’s been great to be a part of it. There seems to be a real buzz around the championship and even more interest for next year, so I can’t wait to see how it develops.”

Sondre Evjen (2nd): “It’s been a fantastic experience to come and race in South Africa – a real highlight for me – and it feels great to finally finish on the podium in RX2! It’s been a long time coming and it’s the kind of result we’ve been chasing all year, so this is the perfect way to end the season. We’ve been quick at most circuits and made the semi-final five times before now but only once converted that into a final appearance, so I’m really happy that we were at last able to prove what we are capable of, as we showed with the second-fastest time after getting a clear run in Q4. We really had to fight for this result, and I must admit, I wasn’t sorry to see the final red-flagged as I lost a lot of time when Dan [Rooke] rolled and thought any chance of the podium was gone. I’m also obviously very relieved he is ok. All credit to the team for giving me a great car all weekend – this podium is for them, my family and my sponsors, and it leaves us with a lot of motivation heading into 2018.”

Tanner Whitten (3rd): “The weekend started out pretty well, and from there, we worked our way consistently up the timesheets. We set the car up to come on later in the semi-final, and I think that showed as we were particularly strong in the latter stages. That put us in a good position going into the final and I actually thought we had an opportunity to take second until the red flags came out, but ultimately, to finish on the podium is always a great result. I take my hat off to the organisers in Cape Town – they did a fantastic job to build a track that played to the strengths of a variety of different driving styles – and the fans gave us a phenomenal welcome. It was incredible to see so many people in the grandstands and at the autograph sessions – there was a huge turnout for the first edition, and I’m looking forward to seeing how the event grows. Overall for me, it’s been a bit of a rollercoaster year, but to come away with four podiums is very positive and I’m looking forward now to taking this momentum into the off-season and hopefully 2018.”

Andreas Eriksson, RX2 International Series presented by Cooper Tires CEO: “We promised the South African people excitement and drama, and I think it’s safe to say our RX2 stars delivered every step of the way! Congratulations to Cyril, who produced a champion’s drive even when he no longer had anything to prove. He is a class act and wherever he competes next year – be it RX2 or elsewhere – we wish him the very best. I was delighted, too, to see Sondre up on the podium, which was thoroughly well-deserved after a superb performance. It was a shame that his team-mate Guillame was forced out through no fault of his own, but he clearly demonstrated on Saturday that his time will come. Likewise for Tanner – both are part of the new generation of young rallycross talents looking to follow in Cyril’s footsteps. Finally, what a wonderful place to conclude the season – South Africa has truly embraced our sport and gave us the very warmest of welcomes. We look forward to returning next year, as both the event and RX2 go from strength-to-strength.”