By Russell Atkins15th May 2017NEWS 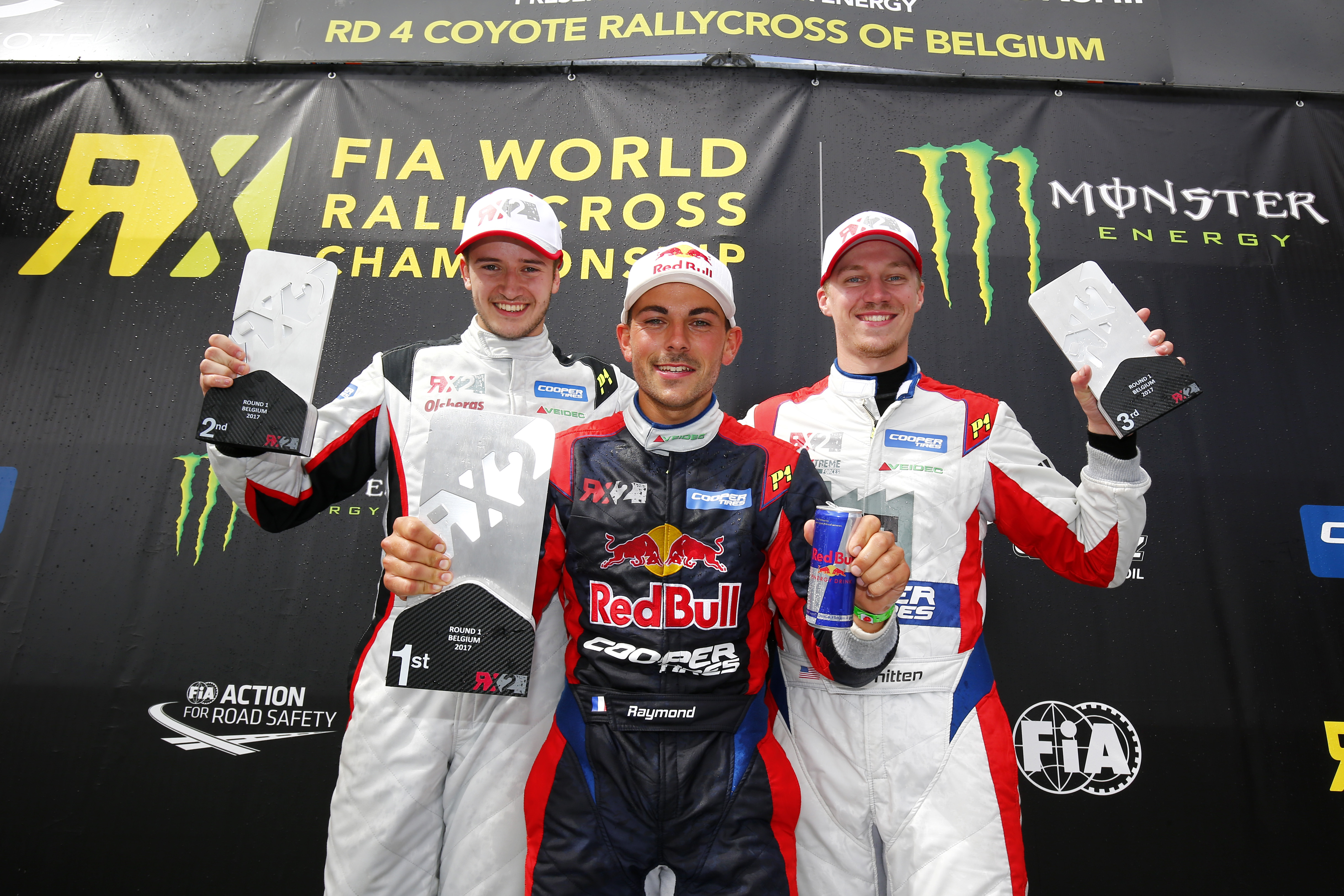 As last year’s champion, Cyril Raymond knows how to win races in the feeder category to the FIA World Rallycross Championship, but few will have been as hard-fought as his outstanding victory at Mettet this weekend (12-14 May) as the stars of tomorrow in the rebranded RX2 International Series presented by Cooper Tires put on a thrilling spectacle for the capacity Belgian crowd.

Following various trials and tribulations on the opening day, Raymond found himself in distinctly unaccustomed territory down in 15th position in the rankings. Worse was to follow, as a sensor failure in Q3 meant the heat was really on for Q4 – make or break for his chances of progressing through to the semi-finals.

With rain also in the air, it seemed that the elements were conspiring against him, but the Frenchman produced a champion’s performance to post the fastest race result of the weekend and in so doing haul himself through to the semi-final. From there, he would prove unstoppable…

Simon Olofsson was the man to beat throughout the qualifying heats, claiming a clean sweep on Saturday to firmly establish himself as the early RX2 pace-setter. Dan Rooke took the fight to him on Sunday, with the reigning MSA British Rallycross Champion’s increasing pressure forcing a rare error in Q4, but Olofsson had already done enough to assure himself of the top spot in the intermediate classification.

Rallying convert Vasiliy Gryazin similarly tallied a brace of triumphs in the qualifying stages to place third ahead of the semi-finals, with Anders Michalak – the oldest competitor in the field at 39 – showing that an old dog can still teach the eager young pups a trick or two with a consistent performance to place fourth.

Glenn Haug made up for a jump-start that resulted in having to complete two joker laps in Q2 – followed by an incident that left him quite literally with three wheels on his wagon – to put himself fifth in the intermediate table, ahead of the recovering Raymond, whose story was only just beginning.

Olofsson maintained his imperious form in the first of the two semi-finals, leading from lights-to-flag for a comfortable victory. After a good launch off the line, Haug kept him honest for a while en route to second, with Evjen profiting from late drama for Gryazin to snatch third – although his joy was short-lived as a subsequent five-second penalty for leaving the track promoted fellow Scandinavian Nilsson to the final.

In the second semi-final, Rooke led away as Raymond immediately stole second place from the slow-starting Michalak, whose race got even worse as he found himself tagged at Turn One. There was further contact on the exit – this time delaying Whitten and Holmen – while at the front, Raymond ramped up the pressure on Rooke, with an earlier joker lap giving him just the undercut he needed to assume the advantage.

The Briton held on for second, with a resurgent Whitten pinching third place off Hirani at the beginning of the final lap and surviving last corner contact following a counter-challenge to pip his Olsbergs MSE team-mate to the line.

From pole position, Olofsson seized the initiative from Rooke in the all-important final, as fellow front row starter Raymond found himself shuffled down to third on the opening lap. Valiantly giving chase, the OMSE ace opted to take an earlier joker lap than his two key rivals – a tactic that would pay dividends.

Olofsson looked to have proceedings under control until he picked up a puncture on lap four, offering the pursuing Rooke all the incentive he needed. Heading onto the penultimate tour, the Englishman darted to the inside into Turn One but contact between the pair resulted in the Swede spinning into the barriers and out of the race.

By the time Rooke emerged from his own joker lap, he found himself staring at the back of Raymond’s #13 car and that was the way it would remain, with the reigning champion performing an enthusiastic donut after the finish line in celebration of his astonishing against-the-odds fightback.

Whitten – another driver in danger of elimination at the end of the first day – rounded out the rostrum following a mature and consistent performance. Haug placed fourth, with neither Olofsson nor Nilsson – who ground to a halt early on – seeing the chequered flag.

The RX2 International Series presented by Cooper Tires will resume at the sport’s spiritual home of Lydden Hill in the UK on 26-28 May, with Raymond and Rooke tied at the top of the drivers’ standings and Olofsson just a single point behind in third.

Cyril Raymond (1st): “This just goes to show that it’s never over until it’s over and you should never give up. It was a bit of a crazy weekend for me. When I was down in 15th place after Saturday, things looked pretty bleak and there was a very real risk of missing out on the semi-finals. That was a new situation for me, but it only gave us extra motivation to succeed. We dug deep and refused to admit defeat, and the Olsbergs boys did a fantastic job to provide me with an excellent car for both the semi-final and the final. It was enjoyable to be on the podium with Tanner, too – we have a great bond at OMSE and he’s my spotter in the States, so it’s good to share these moments. It’s clearly going to be a long, tough season ahead but this is absolutely the perfect start. It was fun having to fight so hard to win, but still, it would be nice to have a slightly more straightforward time of things at Lydden Hill…”

Dan Rooke (2nd): “I’m extremely happy to finish second. I came into the weekend not really knowing what to expect – this was only my second event in an RX2-level car, and the first one hadn’t gone too well. It didn’t take long to find my groove, though, and to be right on the coat-tails of last year’s champion and jointly leading the standings is a very strong start. In the final, Olofsson looked to have picked up a puncture in the last corner which gave me the run, and I knew that was my opportunity. I’m not sure if he didn’t see me, but I was almost fully alongside when he tried to close the door and I had nowhere to go, which unfortunately put him in the tyres. It’s a very high-quality field in RX2 and with such a level playing field, it’s going to be a tough season but my goal is to win – and with my home round next, I can’t think of anywhere better to open my account!”

Tanner Whitten (3rd): “I’m over the moon with that. What an emotional rollercoaster of a weekend! It didn’t start out too good for us as we didn’t have a great deal of pace or luck throughout Saturday, so at that point our goal was simply to make it into the semi-finals. We chipped away, though and finally got some clean air in Q3 and Q4, which enabled us to pull it back. There’s no question that rallycross is the future of the sport, and I’m so grateful to OMSE for giving me this opportunity; it’s also good to have some fast team-mates to compare data with and learn from. Now I need to go back home and get practising on Dirt Rally to prepare for the upcoming events and keep this positive momentum going.”

Andreas Eriksson, RX2 International Series presented by Cooper Tires CEO: “What a fabulous first weekend for RX2! The racing has been tremendous throughout, and the calibre of competitors that we have in the field is clear for all to see. As early as the first free practice session, the top four were covered by less than one tenth-of-a-second. Each and every one of them put on a super show for the spectators at Mettet, and it was also good to witness so many fans come along to the RX2 autograph session in the paddock on Saturday, which proves that our drivers are already beginning to make names for themselves. What I have seen this weekend leaves me in no doubt – the future of our sport is in safe hands indeed.”