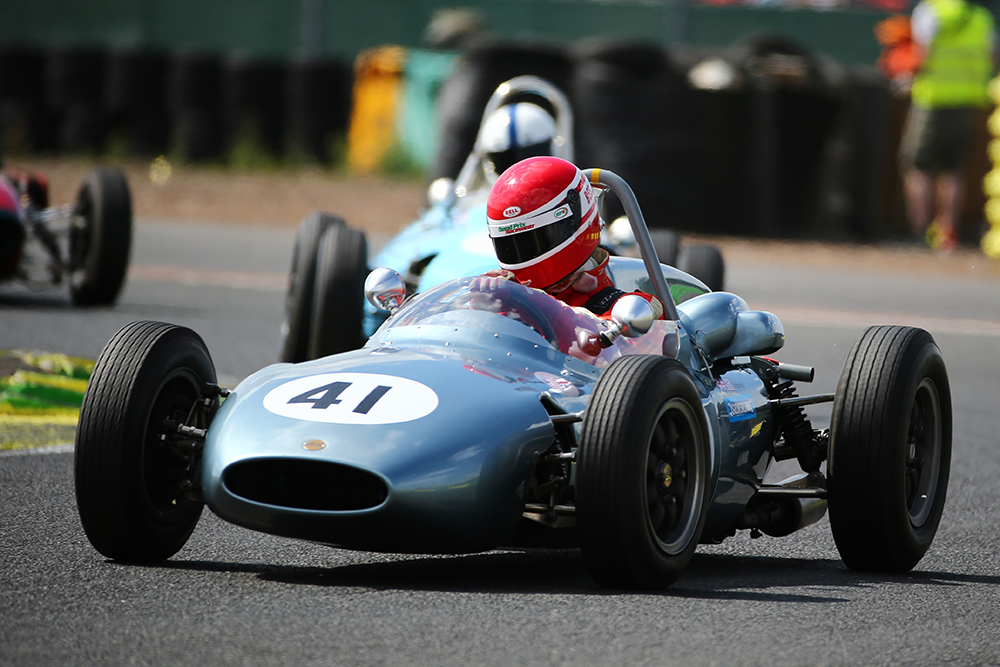 The sixth annual Croft Nostalgia Festival revved into life this weekend (8-9 August) with a heady high-octane blend of classic cars, retro racing, militaria, breathtaking aerobatics and its unique retro atmosphere invoking the 40s, 50s and 60s through to the 1970s.

Entering its sixth year in 2015, the BARC and HSCC-run Croft Nostalgia Festival is firmly established as one of the highlights on the sporting and social calendar in the north-east. Blessed with summer sunshine and building on past successes, this year’s event was by far the biggest and best yet, with visitors savouring some spectacular retro racing on the track as well as a feast of evocative displays from bygone eras.

The British Army brought a significant diorama to showcase the tools at their disposal in the current day and age, while independent exhibitors displayed impeccably kept and restored military hardware with rows of combat-spec Jeeps and Land Rovers, to name but a few, flanking the paddock out by the airfield.  An American Sherman tank joined up with other heavy armour on display in a lunchtime manoeuvres display out in the middle of the circuit on Sunday.

Clive Butler, long-time aerobatic specialist, arrived on the circuit’s adjacent airstrip on Saturday before thrilling crowds an hour later with a spellbinding feat of aerobatics in a specialist Cessna – one of only three examples in the country.

Another equally exhilarating display took place on Sunday from a Russian Yak-52, serving as a generous appetiser for the appearance of the mighty Avro Vulcan bomber XH558.

With Falklands veteran Martin Withers at the controls of the only example of this remarkable aircraft still flying today, crowds were treated to slow speed manoeuvres scarcely believable for a plane of its size. As the ’60s bomber made its exit, Withers cranked up the power and unleashed the famous Vulcan howl, a unique thunder that sadly won’t be heard for much longer as it blasts towards the end of its farewell tour with its enforced retirement sadly due at the end of this summer season.

Of course, the weekend’s racing on-track was the closely competed thrill-fest that many have come to expect from HSCC events and especially the Croft Nostalgia Festival.

Out on the circuit the agile Lotus Seven S4 of John Pringle, an invitational entry into this event, was the weekend’s first winner in Historic Road Sports / ‘70s Road Sports for road-legal cars, comfortably fending off the hard-charging Lotus Europa of Jim Dean, who took the class win.

The latter broke free of the pack early on to collect the runner-up laurels leaving the rest of the series’ entries 13 seconds down the road. Charles Barter picked up third in his super baby-blue Datsun 240Z, while Julian Barter, Charles’ son, was right up with Pringle’s Lotus until he pulled off the track as a precaution, mistaking a fuel light for an oil light on the dashboard.

Pringle took victory in race two the following day – this time ahead of Barter Jnr – who had jumped from the back of the grid, with Barter Snr completing the podium.

Then came the first of the classic open-wheelers with the Historic Formula 3. These spritely machines were not far off the design and construction of Formula 1 machines of their time, and certainly looked the part. David Methley, a surprise entry in his own orange Merlyn took the chequered flag first, even after a penultimate-lap spin made a game of it. Peter Thompson in his Brabham couldn’t quite make Methley pay for his mistake.

Similarities to motor sport’s flagship series were clear to see once more as the Formula Juniors took to the track. Jonathan Hughes’ Brabham BT6 finished well ahead of the pack after getting the better of the opening-lap squabble. His fastest tour was an astonishing four seconds ahead of the nearest competition. Sunday’s return race saw Hughes slip to second, 25 seconds behind winner James Murray.

British Formula Ford entries from the ’60s and ’70s strutted their stuff in the Historic Formula Ford Championship, producing some thrilling racing with slicing and dicing in a close pack. The top-two were separated by just a second and the top five by under eight, as Rob Wainwright got the better of Callum Grant to win after four changes of lead between the first four cars early on in the race.

The corresponding race on Sunday afternoon was brought to a halt on lap seven after a coming together at Clervaux. James Buckton was called as winner.

Warren Briggs, in combination with his stunning red Mustang, proved too much for the chasing pack to handle as chaos ensued behind between Hillman Imps, Minis and Lotus Cortinas in the Historic Touring Car Championship. On Sunday though, the Cortina of Tim Davies took an impressive victory after battling throughout the whole race – never were the pair more than a second apart until Briggs missed a gear with a lap to go exiting the hairpin, allowing the Cortina to sneak through.

Mid-way through a glorious Saturday afternoon came the turn of the Formula Ford 2000s after qualifying narrowed down a burgeoning 27-car entry. It was very much a battle between the top two as Andrew Park and Nelson Rowe traded blows, though the former eventually pulled out to keep Rowe at arm’s length.

Park doubled up on Sunday, this time just three-tenths ahead of Tom Smith’s Royale after a cracking 14 laps where Benjamin Tusting and Callum Grant in third also finished within the width of a cigarette paper of each other – crossing the line a tenth apart.

In the Classic Clubmans Championship John Harrison romped home a minute-and-a-half ahead of the pack in his Mallock Mk21, which offered a slight power advantage over the rest of the field. Harrison took race two for the series in similarly comfortable fashion.

A smaller pack of racers followed, with just five taking to the grid for the oddball 500cc Formula 3s competition. The ’40s and ’50s cars were excellent to watch, however, with Peter de la Roche and John Turner finishing as they’d qualified in one and two, a good 30 seconds clear of third.

Sunday’s Historic Sports 2000 pack was also a smaller one, with seven competing. Peter Needham in his Tiga took the lights-to-flag victory.

The Historic Road Sports rounded off Saturday’s racing with a closely-fought contest between two Lotus Elans – Peter Shaw getting the better of John Davison to win. Kevin Kivlochan took the win on Sunday after a battle throughout with Davison, who slipped a gear allowing Kivlochan’s Morgan through.

Circuit Manager, Mike Cantelo hailed the weekend as an unbounded success, and said: “This was by far the biggest and best Croft Nostalgia Festival that we’ve ever put together. What a fantastic weekend and the flypast of the Avro Vulcan was just the icing on the cake.”