By Russell Atkins10th May 2016NEWS 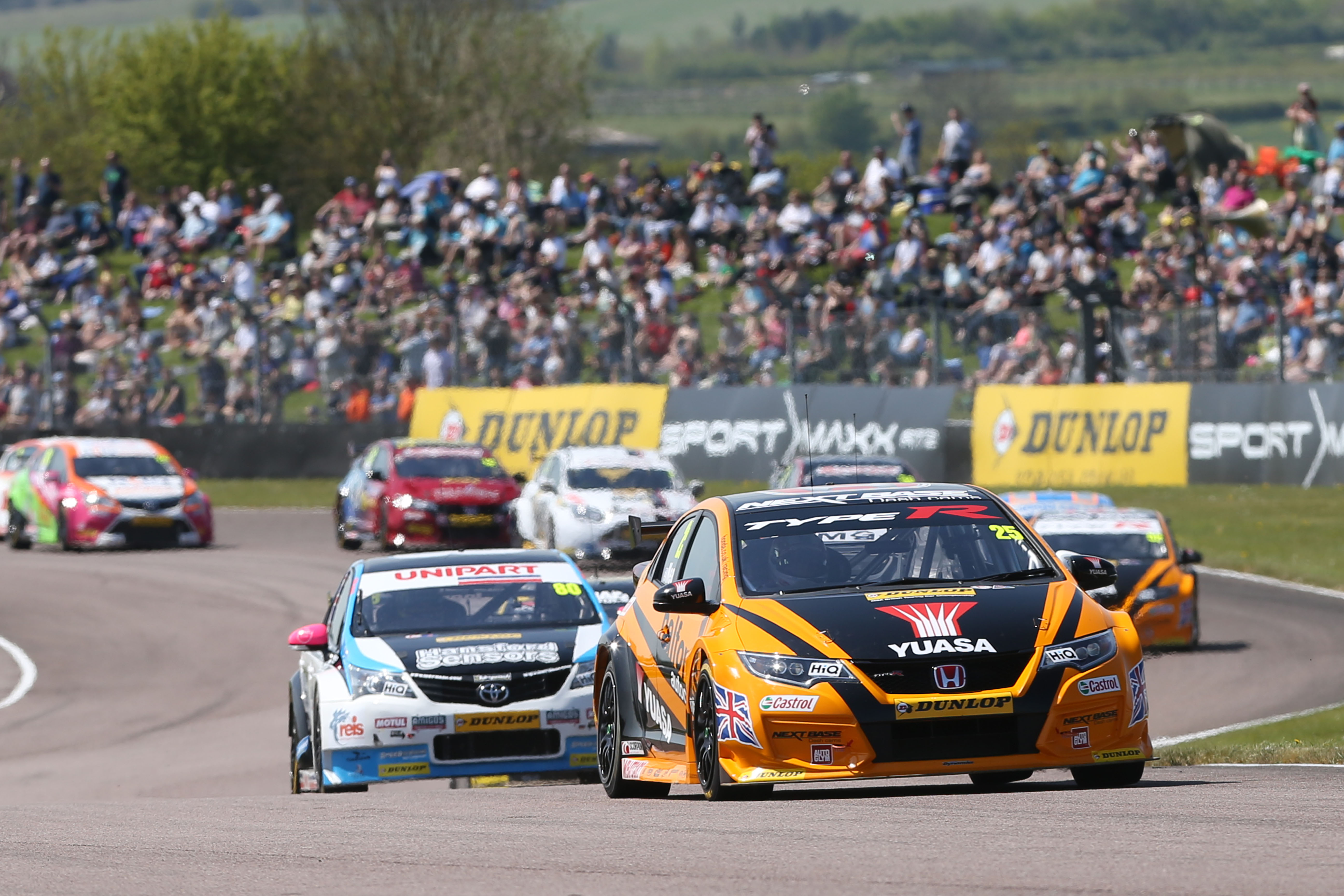 A record-breaking 33,000-strong crowd flocked to Thruxton last weekend (7/8 May) for the return of the phenomenally popular Dunlop MSA British Touring Car Championship (BTCC) – and they were rewarded with a spellbinding spectacle of doorhandle-to-doorhandle racing.

The high-speed Hampshire venue is always an eagerly-anticipated stop on the annual BTCC calendar, and this year fans lapped up the spring sunshine as the action on-track proved to be every bit as hot as the temperatures off it.

Almost 30 of the world’s finest tin-top drivers went wheel-to-wheel at speeds approaching 160mph – the fastest seen anywhere in the country – delivering a trio of enthralling contests for the tens of thousands thronging the grandstands and circuit banking as the mercury climbed to 24°C.

Indeed, the weekend’s first BTCC race was widely hailed as one of the most exciting in recent memory – and this in a series rarely short on high-octane thrills – as Matt Neal, Adam Morgan, Tom Ingram, Aiden Moffat, Thruxton instructor Josh Cook, Ashley Sutton and Andrew Jordan all vied for supremacy, with positions changing from corner to corner.

The fun didn’t stop there, either, with local heroes firmly to the fore. Hampshireman Rob Collard recovered from a troubled qualifying session to tally a hat-trick of top six finishes – and with them, a share of the championship lead – whilst there was a star turn by Fleet’s Dan Welch, who lined up on pole position for the first time in his career in the reversed-grid finale following a brace of earlier top ten finishes.

The support series – the Renault UK Clio Cup, Simpson Race Products Ginetta Junior Championship, F4 British Championship and Protyre Motorsport Ginetta GT5 Championship – were no less spectacular, producing mesmerising side-by-side duels and frenetic slipstreaming scraps. With so much going on, it really was a case of not knowing where to look!

And that was just the on-track element. Before the racing got underway on Sunday morning, the pit-lane was packed for the BTCC autograph session, enabling thousands of fans to grab selfies with the stars of the show.

Spectators were also able to experience Thruxton’s state-of-the-art skid pan and get up close to the circuit’s stunning supercars, gleaming in the sunshine, whilst the presence of the British Army’s awe-inspiring Apache attack helicopter drew many an admiring glance – particularly when it took off on Sunday evening.

“What a weekend!” enthused Thruxton Group Managing Director, Bill Coombs. “I’m still trying to catch my breath. The BTCC never fails to put on a show, but even by its own high standards, this was a bit special. I can’t remember a race as exciting as the first one on Sunday, and the fans were treated to a tremendous day’s entertainment.

“Crowd figures were the highest they have been in the modern era, and we were delighted to see so many people pouring through the gates in the morning and leaving at the end of the day with broad smiles across their faces. Better still, there’s plenty more to look forward to here over the coming months, with British Trucks in June and British Superbikes at the end of July – so summer at Thruxton is only just getting started!”