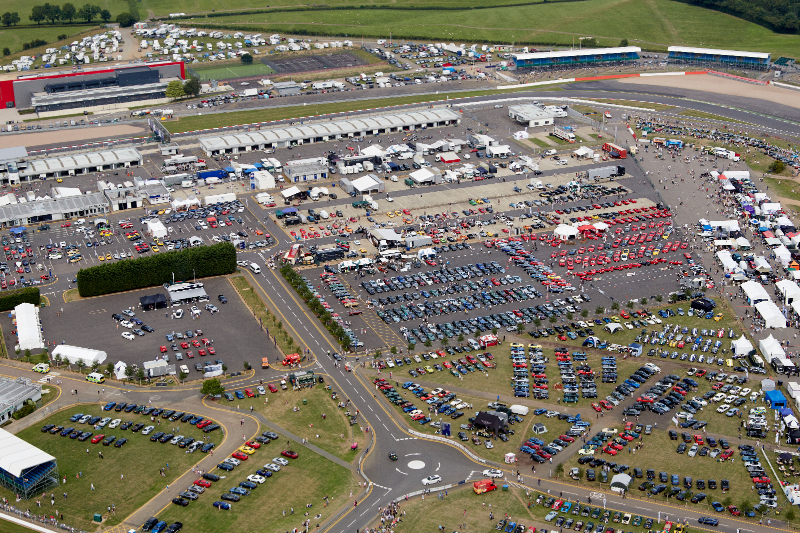 Firmly established as the World’s Biggest Classic Motor Racing Festival, this year’s special Silver Anniversary running of the Silverstone Classic (24-26 July) is already breaking new records. For the first time in the mammoth meeting’s glorious 25-year history, more than 100 car clubs will add to the high-octane atmosphere with huge displays creating a magical infield motor museum at the Home of British Motorsport.
Last year’s spectacular three-day extravaganza raised the bar by attracting an unprecedented 93 clubs, displaying in excess of 10,000 cherished classic cars right at the heart of the award-winning event. Those records have already been topped in 2015 with – to date – no fewer than 110 clubs signing up for money-saving Display Packages.

Moreover, as part of this summer’s birthday bash, bike clubs are also being offered the opportunity to take advantage of these fantastic deals that include two adult admission tickets plus an infield parking pass which allows members to display their car or bike on their registered club’s bespoke stand.

“These sparkling displays are a very important and integral part of our celebration of classic car culture and – like the event – with every year they grow and grow,” enthused Nick Wigley, Event Director. “The record number already registered shows the clubs are coming out in force this summer, once again providing everyone attending the Silverstone Classic with a wonderful spectacle.”

While the magical event will mark its own 25th anniversary in terrific style, as tradition dictates many of the car clubs will be paying homage to their own landmarks with eye-catching track parades on Friday and Saturday. Motoring milestones being honoured on the full Silverstone Grand Prix Circuit this year include 60 years of both the TVR Car Club and Aston Martin DB6, 50 years of the Rolls Royce Silver Shadow, 40 years of the Jaguar XJS and Triumph TR7, 30 years of the Sinclair C5 and Toyota MR2 as well as 25 years of two iconic Japanese sportscars: the ground-breaking Honda NSX mid-engined supercar and the equally evocative Mazda MX-5, which first reached the UK in 1990.

Although car club members have until the end of May to register, Early Bird tickets are currently on sale for visitors wanting to join the party atmosphere. These offer significant savings of up to 15 per cent if purchased before 1 April. Adult prices start at just £34 and stick to the Classic’s widely praised ‘access all areas’ policy, thus providing admission to both National and Wing race paddocks, trackside grandstands and the live music concerts which this year include chart-toppers Status Quo and Paul Young.