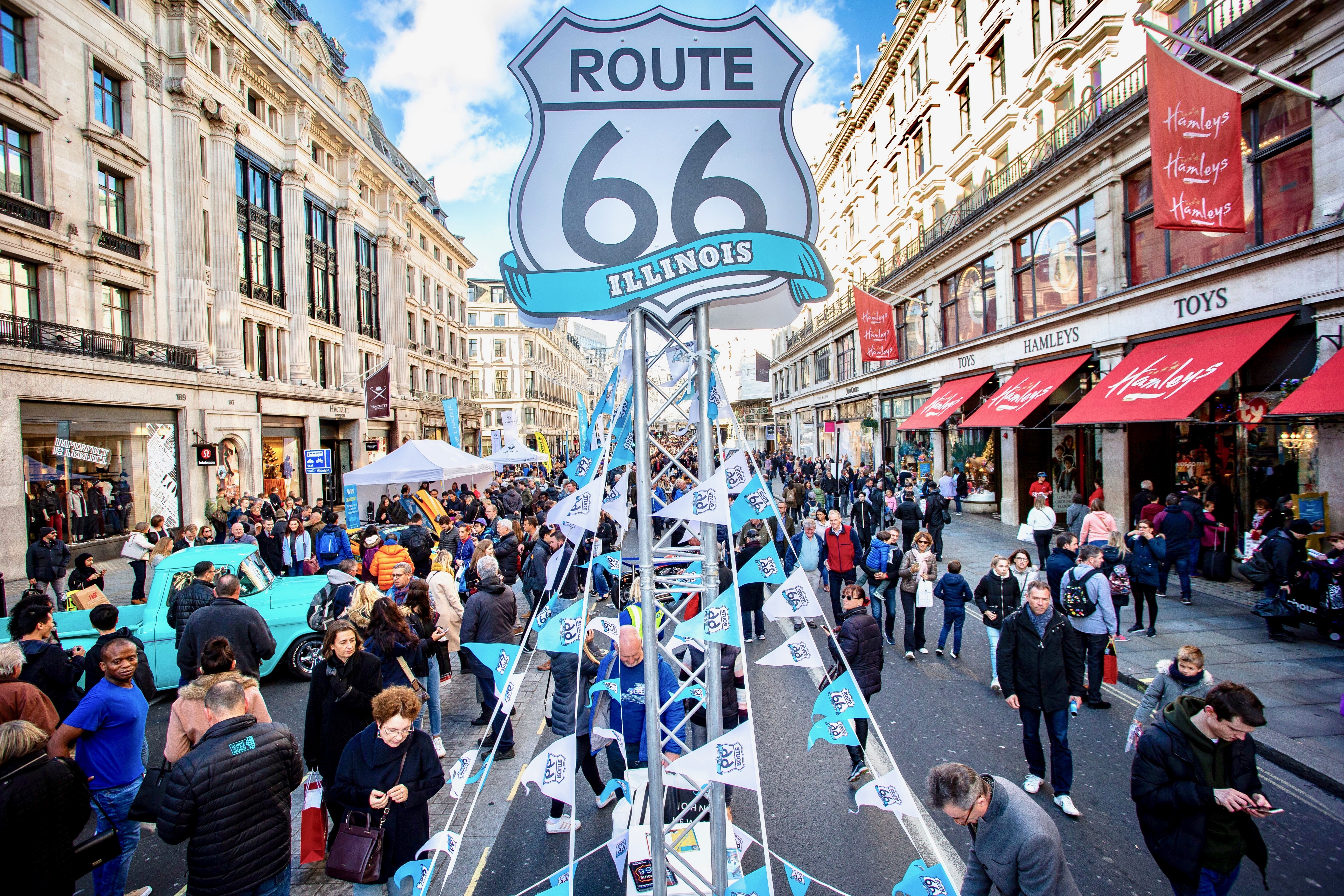 Already established as the country’s biggest free-to-view car-themed spectacle enjoyed by more than 500,000 visitors, this year’s glittering Illinois Route 66 Regent Street Motor Show (Saturday 2 November) will also serve as one of the stand-out events marking Regent Street’s distinguished 200th anniversary. Adding to the excitement, the Show is teaming up with Illinois Route 66 for the third year in succession.

It was back in 1819 that Regent Street took its name from Prince Regent who had instructed celebrated architect John Nash to build London’s first purpose-built shopping street, and what is today a world famous global destination set right in the heart of the capital city.

To mark this momentous milestone, several stylish celebrations are planned along the length of Nash’s iconic curve throughout the forthcoming months including, of course, the Regent Street Motor Show. As tradition dictates, the crowd-pleasing attraction will be staged on the eve of the Bonhams London to Brighton Veteran Car Run and will feature a magical mix of motoring past, present and future.

Though Regent Street precedes the introduction of Karl Benz’s game-changing 1885 Motorwagen, its hallowed facades have witnessed the full evolution of motoring from those early days of self-propelled horseless carriages right up to the latest city-friendly electric cars – an amazing journey through time, echoes of which will be reflected in the landmark 2019 Show.

As ever the formative early days will be wonderfully represented by more than a hundred extraordinary pre-1905 pioneers taking part in the annual Veteran Car Concours d’Elegance before heading off on their route to Brighton at first light the following morning. The unique concours is always a huge attraction – even more so as many of the intrepid time-travellers, who come from all over the world to be part of the occasion, are dressed in eye-catching period costumes.

At the other end of the spectrum, the Motor Show always provides a glimpse into the next 200 years of powered personal transportation with thought-provoking displays of futuristic vehicles, many propelled by the latest innovative generation of low carbon drivetrains.

Equally arresting collections of evocative classic and desirable contemporary cars bridge the decades between the dawn and impending eras of motoring and take on even more significance this year with Regent Street honouring its full history both as a major thoroughfare and as an internationally renowned shopping destination.

Ben Cussons, Chairman of the Royal Automobile Club, said “Putting the spotlight on the timeline of the automobile, the Regent Street Motor Show is now one of this country’s top motoring spectacles. This captivating journey through the automobile’s history never fails to capture the imagination of the public; part of its charm is its universal appeal which draws in both the lifelong car enthusiast and the interested passer-by. We are delighted to welcome back Illinois Route 66 as headline partner, and with Regent Street itself celebrating its 200th anniversary in 2019, this year’s Show will take on added significance.”

Now entering its third year, the event’s title partnership with Illinois Route 66 – another of the world’s most historic and famous highways – continues to go from strength-to-strength. The city of Chicago, Illinois’ most popular gateway, is home to the start of what is often called the ‘Main Street of America’ or the ‘Mother Road’.

Jan Kemmerling, Acting Director of the Illinois Office of Tourism, said, “We are thrilled to partner with the Regent Street Motor Show for the third consecutive year. We know a significant number of UK visitors enjoy travelling to Chicago each year to experience Route 66 in Illinois, where the journey officially begins. This premier motoring event is the perfect opportunity to inspire more travellers to visit Illinois and travel back in time along the ‘Mother Road’ – featuring world-famous historical landmarks and must-see sites, from Chicago to Springfield to Alton and many stops in-between. We look forward to promoting Illinois Route 66 road trips to car enthusiasts attending this year’s Regent Street Motor Show.”

The first 100 miles of the epic 2,448-mile journey to the West coast is situated between Lake Michigan and the Illinois River, a region filled with miles of trails and waterways that stretch from suburban Chicago all the way to Starved Rock State Park.The next stretch of Route 66 is also peppered with iconic landmarks taking travellers through the Springfield region, renowned for its extensive and authentic collection of historic Abraham Lincoln sites, and then into Illinois’ Great Rivers & Routes region, home to another of America’s legendary automotive arteries, the Great River Road along the Mississippi River, stretching north-south from Canada to the Gulf of Mexico.

Whether it is a road trip on Route 66 or a visit to Regent Street in its 200th year, there is lots to savour in 2019. Further details of the not-to-be-missed Show will be revealed in the coming months.