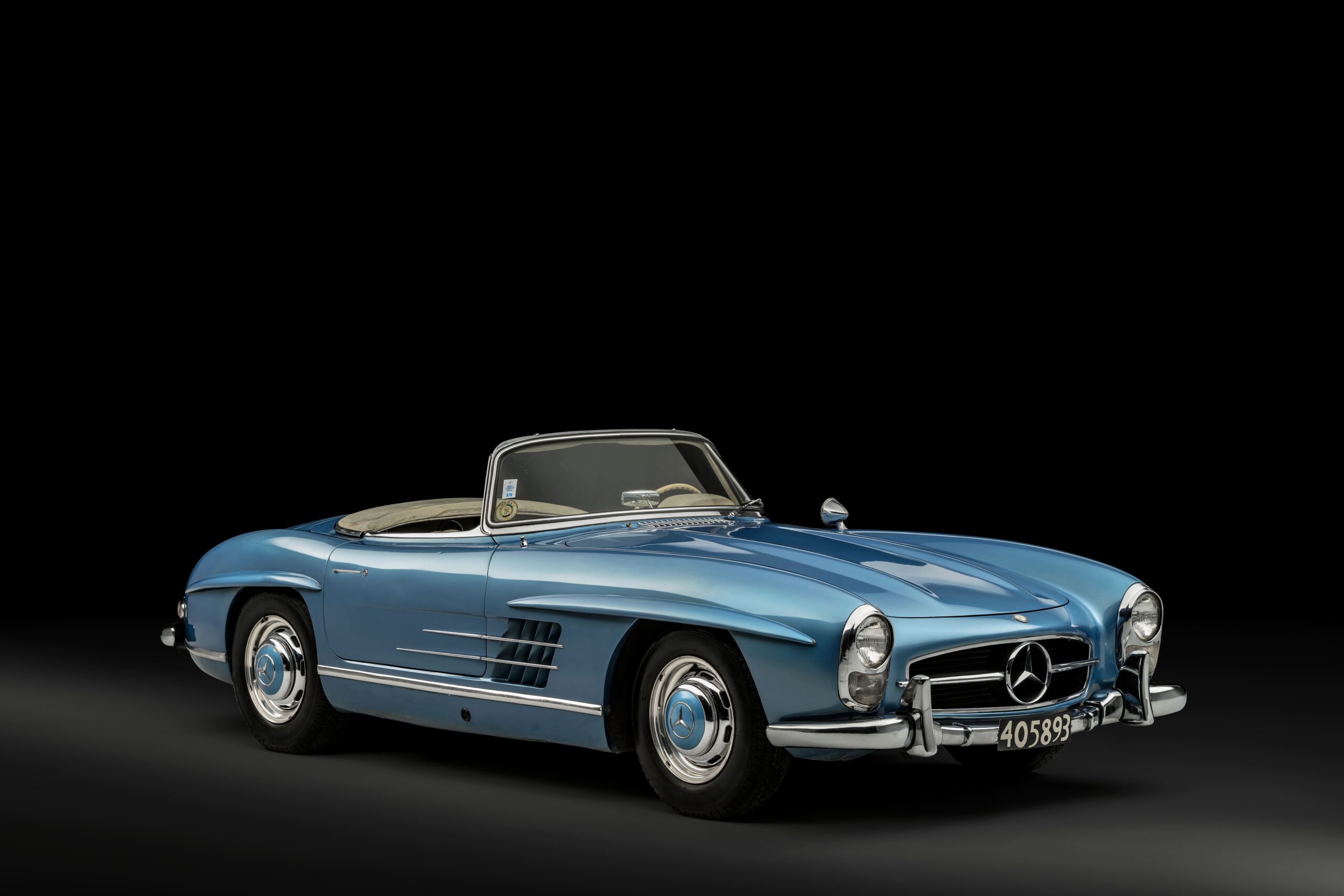 RM Sotheby’s is honoured to offer the ex-Juan Manuel Fangio 1958 Mercedes-Benz 300 SL Roadster, a car which was presented as a retirement gift to Fangio from Mercedes-Benz in 1958, and which is known to have been one of the driver’s favourite cars. The bond that Fangio had forged with Mercedes-Benz was such that the 300 SL Roadster was delivered in time for his 47th birthday, received at The Dorchester Hotel in London, marking his phenomenal achievements for the Stuttgart-based outfit in motorsport.

Finished in Metallic Light Blue over a Cream leather interior, it was an instant hit with Fangio. El Maestro is pictured on many occasions behind the wheel of the car with its roof down, while its matching-colours hard top can be equipped for driving in all weathers. Throughout its years of personal ownership as one of Fangio’s most treasured cars, the 300 SL was known to follow the driver around the world. It is believed that almost all of the 72,951 km currently showing on the odometer was accrued at the hands of Fangio. He received the car in England and immediately embarked on a driving tour of Europe with his girlfriend Andrea Berruet, playing out his new role as an ambassador for Mercedes-Benz. One of the most memorable pieces of footage of Fangio is an “onboard” of him drifting a Maserati 250F at the Modena Autodrome, and it is fitting that at the very beginning of the film, Fangio draws up alongside his 250F in this very 300 SL. This 300 SL would be used by Fangio for his Mercedes-Benz ambassadorial work in Europe up until 1960.

Thereafter, Fangio worked with senior figures from the German marque to develop Mercedes-Benz’s market share in the driver’s native South America. The 300 SL Roadster was exported from Europe to Argentina—curiously, declared in the transfer as a “trophy” to circumvent contemporary taxes on bringing automobiles into the country—and Fangio would resume the ambassadorial role that he started in Europe, much of which was achieved from the behind wheel of this car. First registered in Argentina in March 1960 and from that time, Fangio would continue to use the Roadster extensively throughout the next two decades, fulfilling appearances at new Mercedes-Benz showrooms as the German company expanded its dealer network in South America, Fangio was known to travel between appointments in his beloved 300 SL. When Silvana Suárez, was crowned “Miss World” in 1978, she undertook a parade on the streets perched atop the rear seats with Fangio at the wheel. The 300 SL twice attended the 1000 Millas with Fangio, a thousand-mile endurance race in Argentina, while many of the most special memories of this car in Argentina are personal. Fangio’s nephew, Juan Manuel Fangio II says: “That car marked my childhood, it is a car that awakened special feelings in me. That car identified my uncle after his retirement. It occupied a preferential place among all the vehicles he had, not only because of the characteristics it had, but also because of the importance it gave having been a gift from Mercedes-Benz.’

In 1986, as El Maestro approached his twilight years, this 300 SL was put on permanent display by the driver at the Juan Manuel Fangio Museum, located in his hometown of Balcarce, Argentina. The car stood pride of place in the museum collection for many years, displayed alongside many of the other significant cars that Fangio drove in his celebrated career. Widely recognised not only as one of the greatest drivers of all time, but also one of the most charismatic and popular, the great man racked up five World Drivers’ Championship titles in the 1950s—two of those achieved driving for Mercedes-Benz, scoring consecutive seasons’ victories in 1954 and 1955 behind the wheel of the peerless W196.

Precious remnants of the Balcarce-born driver’s celebrated life rarely surpass the magnitude of cars that the man is known to have driven. Even without this 300 SL’s unique connection to the legendary driver, it would be regarded as a great survivor with remarkable originality. It retains its original matching-numbers chassis, engine, body, gearbox, differential, hood frame and hardtop. Most importantly, its original Crème leather interior with all the wear and tear created by the great man’s ownership —including where his knee will have collided with the lower dash—is all present. In addition, the interior features a unique gear knob fitted by Fangio, and a UPPI sticker, an organisation that Fangio was a founder member of as a predecessor to the Grand Prix Drivers’ Association. In addition to this 300 SL’s unique story and remarkable condition, the next owner will be the second registered owner after the Fangio family.

RM Sotheby’s Private Sales is honoured to present this incredible 300 SL Roadster for sale in an exclusive and rare opportunity to own this highly significant part of motorsport history. Preserved in wonderfully original condition and having never had any registered keepers outside the Fangio family, the car still carries the same cream-coloured suitcase in the boot that Fangio would have used on one of his picture-perfect drives across Argentina. This incredible 300 SL could easily be enjoyed just as Fangio did; with its open-top roof, engaging manual gearbox and straight-six 3.0-litre engine, or simply preserved as a perfect homage to El Maestro.