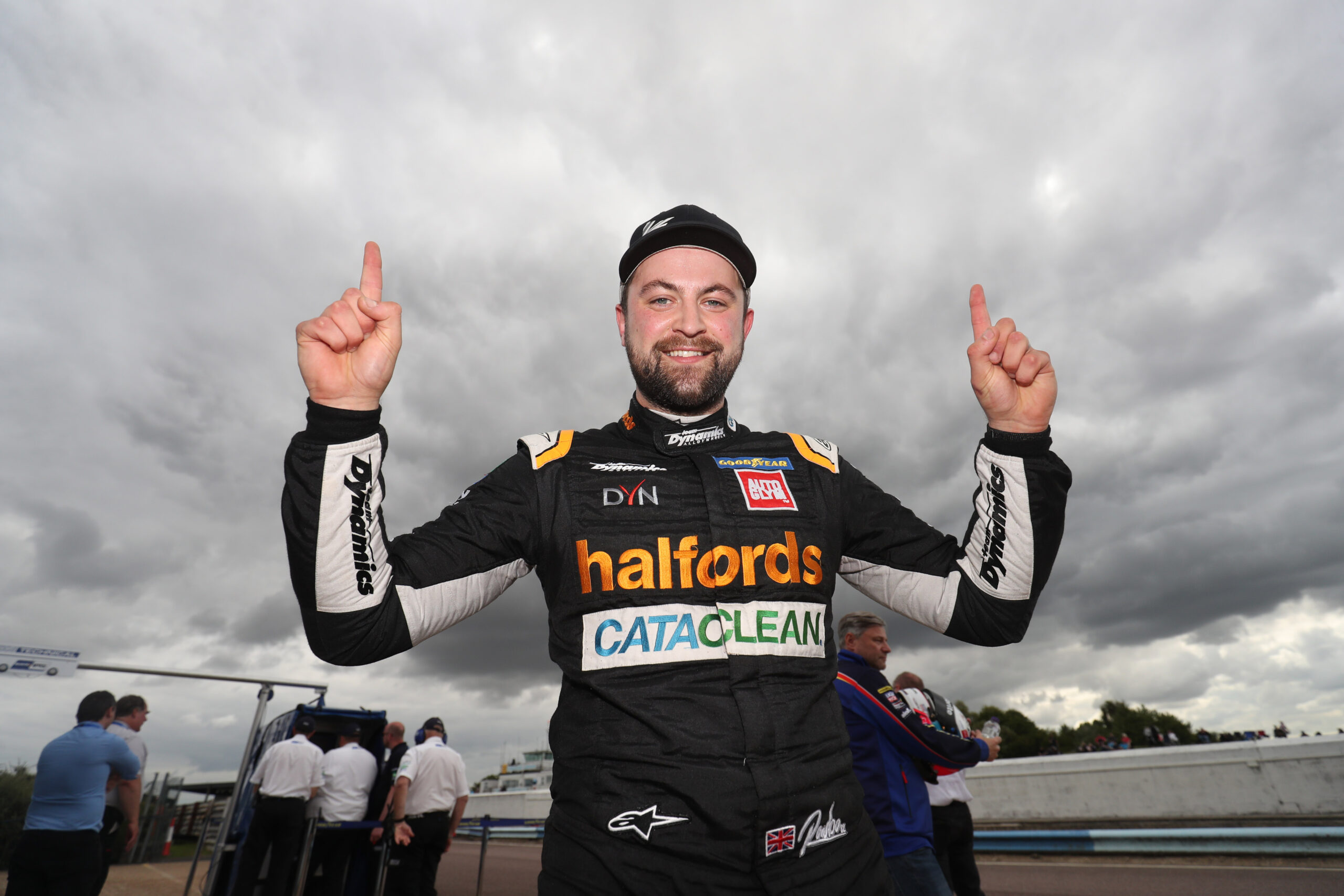 Rowbottom has been hugely impressive since his off-season switch to the Team Dynamics-run Hondas, having already made headlines with a maiden pole position at Brands Hatch and a first-ever victory at Oulton Park.

Now, as the second half of the BTCC campaign commences at Thruxton, the 32-year-old has cemented his ever-growing reputation with a pace-setting lap at the fastest circuit in the country.

MB Motorsport accelerated by Blue Square’s Jake Hill came within a whisker – 0.086s to be precise – to his first BTCC pole position, but the young Kent talent eventually had to settle for a front row starting berth for tomorrow’s opener.

Hill has fond memories of Thruxton following his podium hat-trick during the May curtain raiser, and a similar return tomorrow will propel his championship challenge.

Josh Cook’s affiliation with the Hampshire speedbowl is well documented, having taken six victories from his five previous visits, and the BTC Racing star delivered again with third during qualifying.

Standings leader Ash Sutton secured seventh in his ballast-laden Infiniti, as his Laser Tools Racing team-mates both hit trouble. Scotsman Aiden Moffat had to recover from an early-session puncture to take 18th on the grid, whilst Carl Boardley could only manage 26th after clipping the barrier during an off-track moment.

The Adrian Flux with Power Maxed Racing duo of Daniel Lloyd and Jason Plato took eighth and 11th respectively, with Team BMW’s Colin Turkington and BTC Racing’s Senna Proctor wedged between the Vauxhalls on the timesheets.

Such was the incredible pace and competitiveness of the session that the top ten cars were separated by less than half a second.

Notable absentees from the top ten included Tom Ingram in 12th in the Ginsters EXCELR8 with TradePriceCars.com Hyundai and Halfords Racing with Cataclean’s Gordon Shedden down in 14th.

Shedden is the most successful current driver around Thruxton, having taken seven career victories around the 2.37-mile circuit so far, and the three-time champion looked to be a contender this afternoon.

At one stage Shedden had set his best first sector and the best overall second sector before pitting with what looked like a brake fire. While issues with the #52 Honda may have hampered his progress during qualifying, the 42-year-old will be one to watch tomorrow afternoon.

Rounds 16, 17 and 18 of the 2021 Kwik Fit British Touring Car Championship will take place at Thruxton tomorrow with a huge crowd expected to descend on Hampshire, and many more watching the action live on ITV4 from 1110.

Daniel Rowbottom said: “I was happy with that. I didn’t expect it this morning! I suffer with migraines and woke up with a horrible pain behind my eyes and thought ‘this is going to be a tough day’. I’d just perked up a bit after a bit of food just before qualifying and there we go, that’s how we delivered it.

“The problem here is you’ve got such a small window for the tyres. If you push half a lap too early before your flying lap, you take the edge off the left front. And then vice versa, if you don’t get the rears up to temperature it’s a bit scary out the back with the quick stuff. But that’s great, the car’s great, the team’s great – everything’s fantastic!

“Need to get a better start from pole than last time, the pressure’s on! We did get the starts quite good at Oulton Park, so let’s have a go and see what happens. Fingers crossed.”

Jake Hill said: “I’m over the moon in terms of the performance. We obviously went well here earlier in the year and it’s nice to see we’ve continued that streak.

“We know the car’s good at Thruxton and I did a pretty good job too, so it was nice. It was a fantastic weekend for us back in May and I’m hoping it’s shaping up to be an awesome one tomorrow.

“I’m a little gutted though, I thought that might have been my first pole but that wasn’t meant to be. A great job to Dan [Rowbottom] because that’s no mean feat. But nonetheless, I’m absolutely thrilled with second and away we go!”

Josh Cook said: “It was a good session, I’m pleased with third as we struggled a little bit with balance issues, so to hang on to it and get a lap out of it, P3 is good. Bit disappointed because I know that the pace was there to be at the front, but you can’t complain. We’ll race from there.

“Obviously P3 is not all lost for sure. We know we’ve got really good race pace around here. Obviously Thruxton is notorious for being ultra-hard on tyres, but Goodyear has done a lot of development over the years to really make them go the distance and our car really does look after them well.

“Overall, I’m really pleased with that, obviously credit to Rowbo for getting pole and then Jake sneaking in front of me, but we can fight from third.”