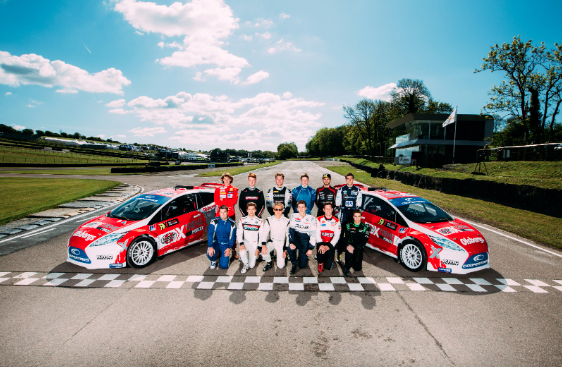 Lydden Hill today (21 May) revved up for this Bank Holiday weekend’s arrival of the thrilling FIA World Rallycross Championship by hosting a special RX Talent Search contest aimed at finding a new British rallycross star. After some tough competition between 12 of the UK’s most promising young drivers, Tom Onslow-Cole was voted the winner, receiving an RX Lites prize drive at the Istanbul round of World RX in October.

The initiative was a joint venture between the MSA, IMG (promoter of the FIA World Rallycross Championship) and FirstCorner (the company behind RX Lites). The Olsbergs MSE team provided a pair of cars, while Lydden Hill – the Home of Rallycross – lent further support.

The dozen finalists were drawn from 122 applications from MSA Competition Licence holders aged 18 to 30, representing various disciplines such as circuit racing and stage rallying, as well as rallycross. They each enjoyed a pair of four-lap runs on the mile-long Kent track with engineer feedback, plus an interview with the judges.

Four drivers – Onslow-Cole, Sennan Fielding, Chris Ingram and Dan Rooke – were then chosen for a second interview before a jubilant Onslow-Cole was crowned the winner. He will now make his RX Lites class debut at the World RX of Turkey.

Onslow-Cole, a GT racer and former BTCC race winner, said: “It’s important to have a positive attitude so I woke up this morning hoping it would be my day, although I definitely wasn’t expecting it. Not only is the prize fantastic but to come here and be pitched against what the RX Talent Search deemed to be the best talent in the UK and come out on top is a nice confidence boost. I think the whole initiative is fantastic and I’d like to thank everyone involved in putting it together; I hope to do them all proud in Istanbul.”

Reid, who heads up both the MSA Academy and FIA Young Driver Excellence Academy talent development programmes, said: “Rallycross is a growing sport and it was fantastic to see drivers from so many different disciplines experience an RX Lites car. The final decision was incredibly tough, highlighted by the fact we had to increase the top three to four for the final interview. Tom is a deserving winner and will do a great job of representing both the MSA and World RX in Turkey. This opportunity has hopefully highlighted to lots of drivers that rallycross is a viable career option for them to consider.”

Anayi, the man behind World RX’s exponential growth, said: “The most amazing thing we have seen today is the array of drivers representing the best bits of motor sport. We want to create a genuine career path for drivers from an early age and a viable option to become a world champion. The drivers today didn’t all know that rallycross could give them that chance, so hopefully we’ve opened their eyes and shown them what our sport can offer.”

With the RX Talent Search concluded, the spotlight switches to the dramatic Motorsport News World RX of Great Britain at Lydden Hill this weekend (23-24 May), the UK’s round of the FIA World Rallycross Championship.

All the RX Talent Search finalists and the other 110 applicants have been invited back to Lydden for the event, which is expected to draw a capacity crowd to witness the world’s top rallycross competitors in action. For more information, visit www.lyddenhill.co.uk

It’s not too late for fans to take advantage of advance tickets for this weekend’s very special power show – these are priced from just £25 for Saturday and £30 for Sunday. Admission will rise to £30 and £35 for any remaining tickets to be sold on the gate. Accompanied children aged 12 and under will be admitted free of charge, while VIP Hospitality and a limited number of grandstand tickets are also available in advance.

Those wishing to take full advantage of the advance ticket offer should visit the official www.lyddenhill.co.uk website for more information.