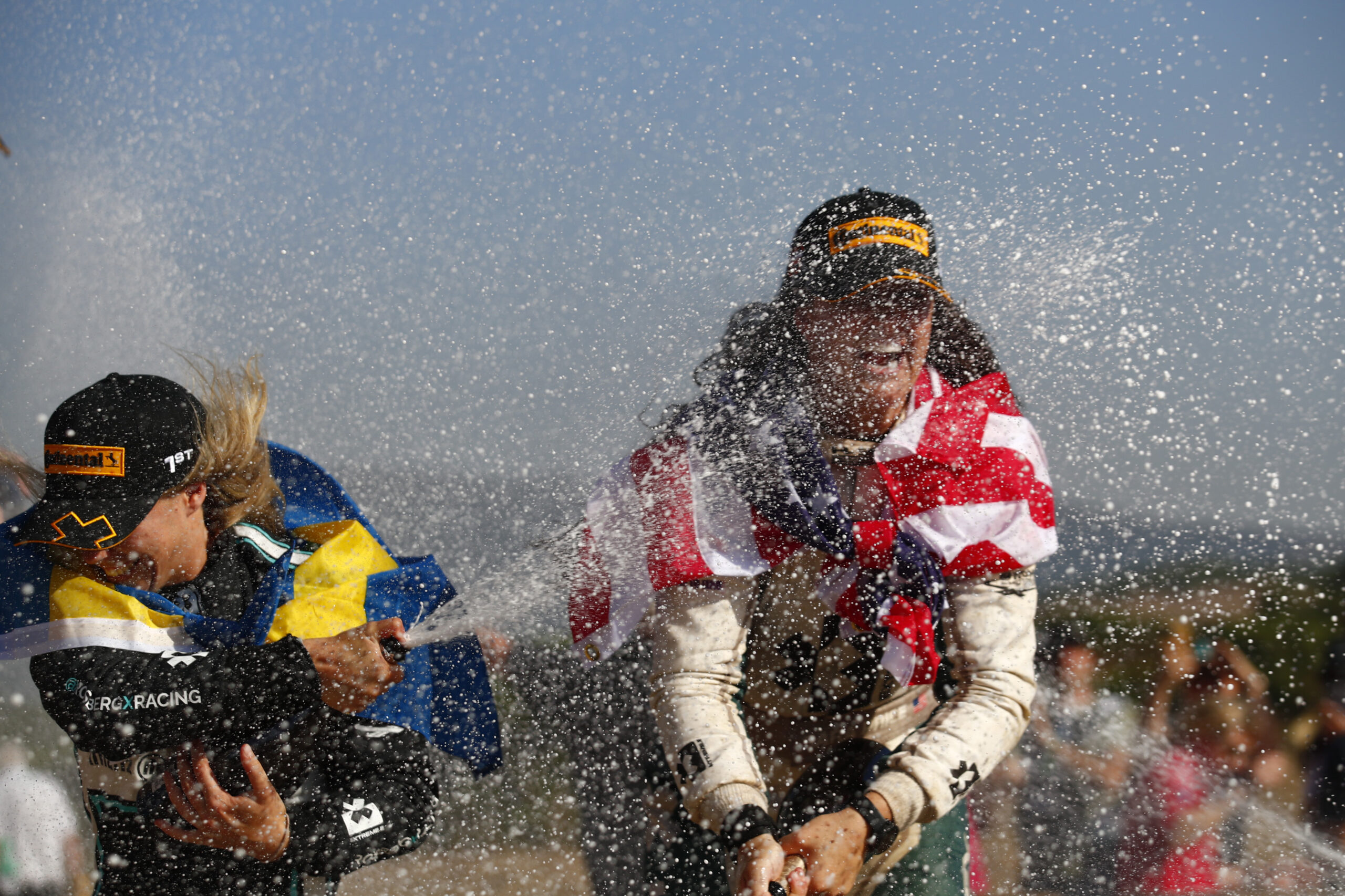 Juan Pablo Montoya, Dario Franchitti and Alex Zanardi are just some of the star-studded names who have been victorious driving for Chip Ganassi Racing. In Sardinia, Kyle LeDuc and Sara Price added their names to the illustrious list.

For Price it was even more noteworthy, becoming Ganassi’s first-ever female race winner. We caught up with the American to reflect on her maiden Extreme E win and where her Sardinian success ranks amongst her career highlights.

“I talked to Chip [Ganassi] right away,” laughed Price. “My conversations with Chip are always great, but to tell him we finally did it was one I have been looking forward to for a long time!

“I want to make him proud because I’m proud to be a part of this team, but most of all I’m hungry to be on that podium in the top spot, and he knows how much it means to me!

“I would have to say winning in Extreme E, and also making history for Chip Ganassi Racing, probably tops my list of career highlights.”

For Price and team-mate LeDuc it was a victory that had been a long time coming. Bad luck and reliability issues haunted them throughout Season 1, particularly in last year’s event in Sardinia when they were denied a first win on the last lap in the Final.

After a steady opening round in NEOM, Saudi Arabia, where the team finished fourth overall, victory in the first event in Sardinia was met with relief. And for Price, who became Chip Ganassi’s first-ever female race winner, it was a momentous moment.

Price said: “It was about time! It felt like getting a win was inevitable, it was just a matter of when and where the pieces would fall into place.

“It feels incredible to get our first Extreme E win, but to be Chip Ganassi Racing’s first female driver to do so, I’m just honoured to be a part of the team, break barriers, and make Chip proud.

“It’s a sense of relief to get the monkey off our back and focus on what we all know we can do. We love racing, we love offroad, and we eat, breath, and live it, so this momentum just reaffirms we’re doing the right things.”

No.99 GMC HUMMER EV Chip Ganassi Racing claimed their inaugural Extreme E win despite finishing second on the course in the NEOM Island X Prix I.

A collision between the on-course winners Rosberg X Racing (RXR) and ACCIONA | Sainz XE Team earlier in the Final meant that despite taking the checkered flag, Nico Rosberg’s outfit were still at the mercy of a post-X Prix penalty which would drop them down the order and, ultimately, hand victory to Price and LeDuc.

After spraying champagne as runners-up and leaving the venue in high spirits, No.99 GMC Hummer EV Chip Ganassi Racing were given a further boost later that evening when RXR’s penalty dropped them to third, ensuring a first win for the American team.

But just when did Price and LeDuc sense victory might be in the offing?

“We heard some rumblings around the podium that there could be a ruling,” said Price.

“I wanted to just enjoy the moment, given it was our first podium at the time. When we later found out, it was emotional and an incredible feeling. Would I have liked to win without a team getting penalties? For sure, but in racing, anything can happen, and we set ourselves up to be there.

“Our GMC HUMMER EV team has a big network of supporters out there so it was good to get the win for them as well since they’ve cheered us on from the beginning.”

Despite demonstrating pace from the outset in Sardinia, technical issues meant the team would have to qualify for the Final via the Crazy Race. For a team that has encountered its fair share of bad luck in Extreme E, No.99 GMC HUMMER EV Chip Ganassi Racing had to tap into their stores of resilience once more.

Price said: “We definitely had our work cut out for us after last year’s round of bad luck and starting as the underdog. We knew we had to win the Crazy Race to advance to the Final, which was a challenge. We started in a non-ideal grid position, but were able to have a mistake-free run and quickly focus our efforts on the Final race. Dare I say we picked up a little good luck!

“Coming out on top overall was the breath of fresh air that we desperately needed. It was quite emotional for me because I’ve put everything I had into doing well in this series and it finally happened. I’m so proud of our team and all the hard work we’ve put into the programme.”

Despite winning the first round in Sardinia, the team could only manage seventh in the second event. Nevertheless, Price and LeDuc are runaway leaders RXR’s nearest championship challengers, albeit with a 37-point deficit.

Price said: “RXR has a pretty good points lead currently, and we sit in 2nd with two other teams close, so it will be a battle until the very end. We just have to do what we do best and that’s to let our instincts as seasoned offroad racers take over.

“In Extreme E anything can happen and we will be ready!”

Extreme E’s final two X Prix of Season 2 will see the Championship race in South America for the first time. The series heads to Antofagasta, Chile, for the Copper X Prix on September 24-25, before the season finale in Punte del Este, Uruguay, for the Energy X Prix on November 26-27 to round off 2022.