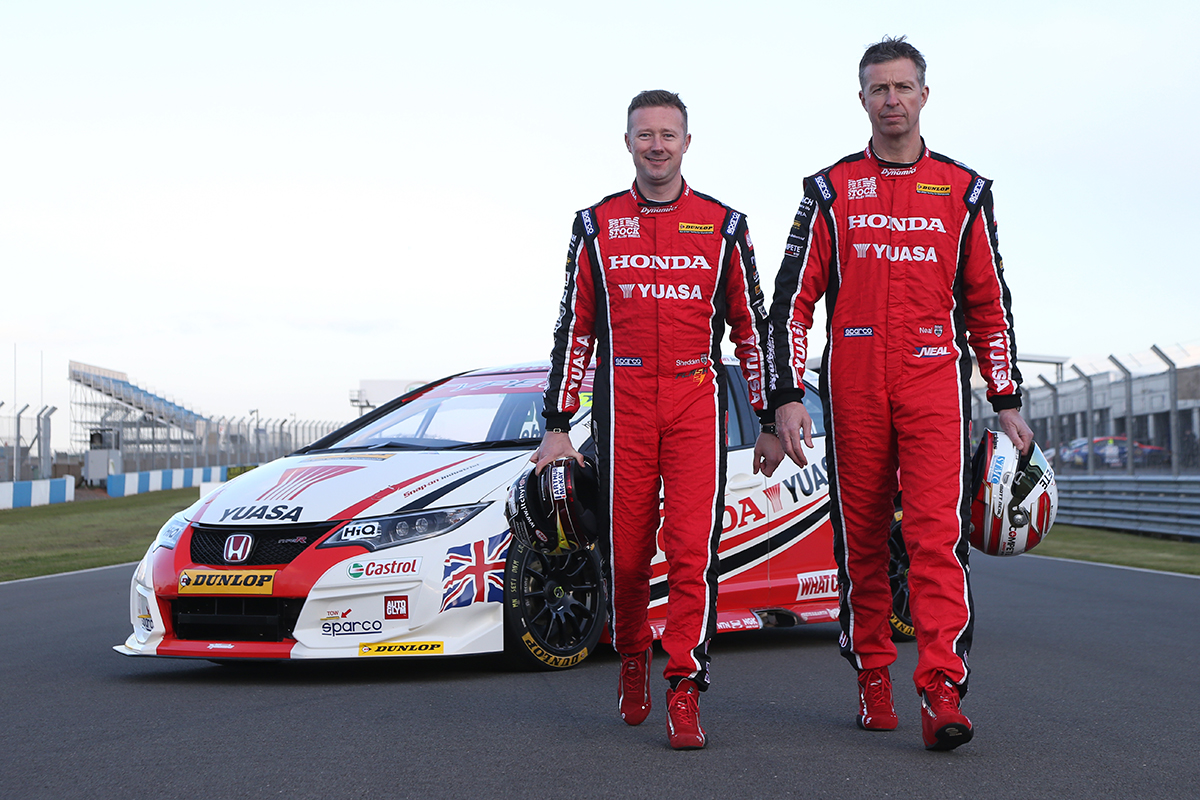 Honda Yuasa Racing’s dynamic duo Gordon Shedden and Matt Neal are revved-up to get back on-track at Snetterton next weekend (8/9 August), and are targeting an immediate return to the top step of the rostrum following a long summer break.

Shedden and Neal headed into the Dunlop MSA British Touring Car Championship mid-season hiatus with the momentum on their side, sitting first and third in the title standings – separated by just 22 points – as Honda comfortably tops the manufacturers’ table. They will be looking to maintain their rich run of form in Norfolk, where both are previous winners.

The new-for-2015 Honda Civic Type R racecar has proven to be a potent weapon at every circuit the BTCC has visited thus far, and Snetterton promises to be another happy hunting ground for a hot hatch whose eagerly-awaited road-going sibling is now beginning to roll off the production line.

“The time seems to have flown by since Croft, with a mixture of testing, British Superbikes back home at Knockhill and a bit of fun at the Silverstone Classic last weekend. That was a great event, and the first time Matt and I had won a race together. Normally, we’re trying to beat each other, so it was pretty cool that we both got to stand on the top step of the podium at the same time! Now I’m looking forward to getting back into the BTCC groove. We have to make sure we keep the points ticking over and make the most of every opportunity. It’s going to be tough for me in qualifying with 75kg of ballast on-board and with the stop-start nature of the circuit, but that will ebb-and-flow as the weekend goes on. Snetterton usually produces some good racing, and I’m confident we’ll be in the mix. Ultimately, we need to be competitive everywhere if we want to win the title, and I’m excited about the second half of the season as there are a lot of tracks coming up that I think will really suit the Civic Type R.”

“It’s not exactly been that much of a break! I went to Portugal with the World Touring Car Championship boys for my TV duties, then to Knockhill where one of my lads was racing, then the British Grand Prix and last weekend the Silverstone Classic – I’m coming back to the BTCC for a rest! All joking aside, though, I’m really excited about getting back into it and rolling our sleeves up again. I’m a big fan of Snetterton; I like the challenge posed by the new layout, and you need a good all-round car there – which is where the Civic Type R really scores! Both ‘Flash’ and I will be carrying a lot of weight in qualifying and race one, which will have an influence with it being such a long lap, but we’ll be in the hunt somewhere, I’m sure. We go to Snetterton targeting podiums and wins – that’s where we need to be.”