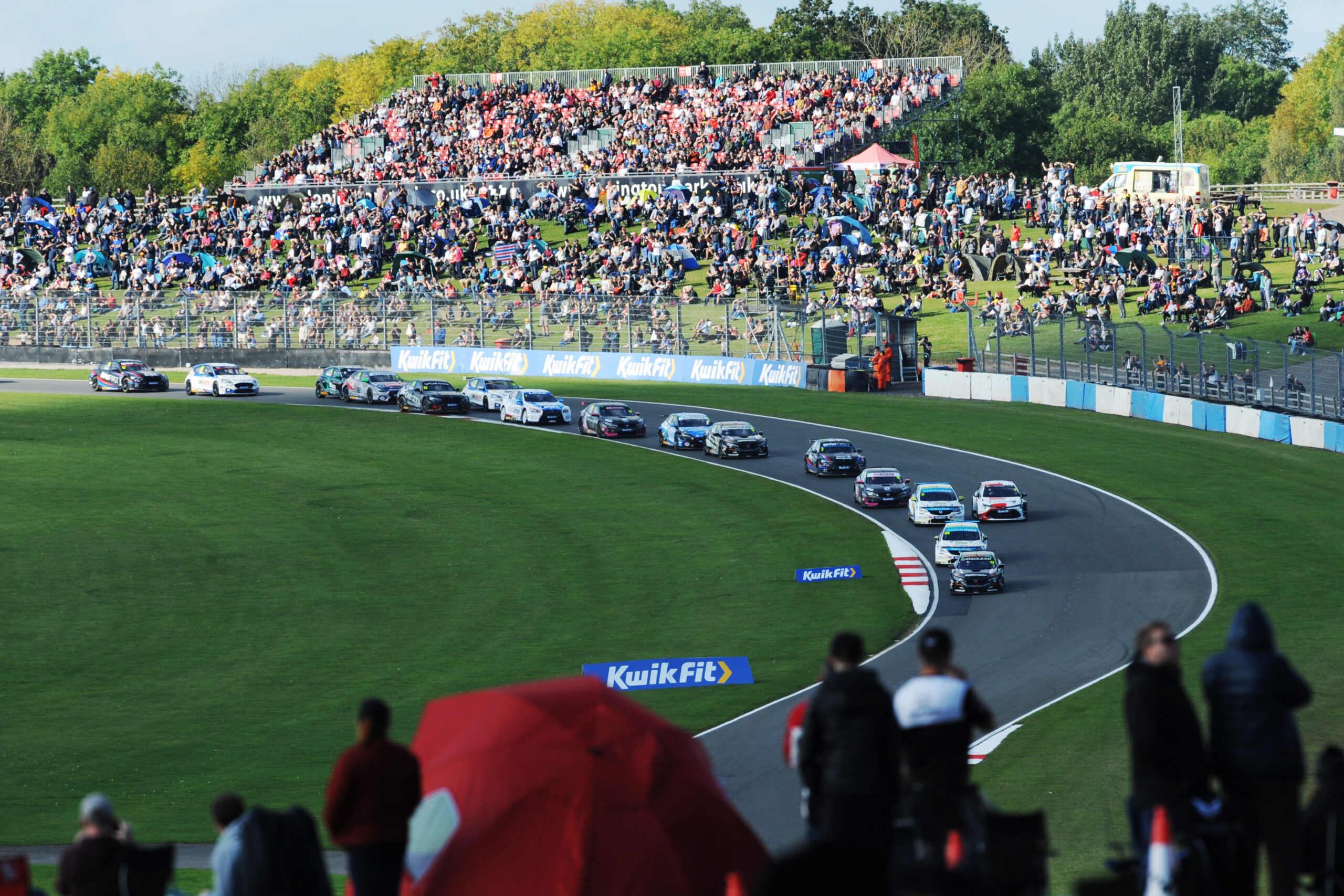 Halfords Racing with Cataclean’s Shedden and Team BMW’s Turkington already have a remarkable seven BTCC Drivers’ titles between them, and now the tin-top legends are celebrating 50 and 60 race wins respectively.

Pole-sitter Shedden triumphed in the opener with a commanding lights-to-flag performance, despite coming under race-long pressure from Adrian Flux with Power Maxed Racing’s Dan Lloyd, while Rory Butcher completed the podium for Toyota Gazoo Racing UK.

Scotsman Shedden doubled up in the second bout when on-the-road winner Tom Ingram was penalised for gaining an unfair advantage during a tussle for the top spot.

Ingram looked to have produced a masterclass at the famous Leicestershire venue, having sliced his way from 11th to sixth on the opening lap, before the #80 Hyundai gradually picked off the top five.

Ingram was hounding race leader Shedden shortly after mid-distance, and he soon squeezed his Ginsters EXCELR8 with TradePriceCars.com car down the inside of the Honda Civic Type R at Coppice. In a post-race review, however, Ingram was found to have gained a push-to-pass advantage in the incident, having tapped the Honda ahead of him before completing the manoeuvre.

When the dust settled, the final podium result was Shedden, Ingram and Butcher, whilst championship leader Ash Sutton came through a potentially bruising encounter to finish fourth.

The 49th and 50th victories of Shedden’s illustrious BTCC career were immediately followed by another landmark when Turkington triumphed in the finale – bringing him level with the legendary Andy Rouse in the all-time winners’ list.

The Team BMW man bounced back from race two disappointment – when he spun out of contention – to produce a brilliant and dominant drive in the final encounter, securing his 60th success in the process.

MB Motorsport accelerated by Blue Square’s Jake Hill – along with Turkington – kept his title hopes alive with second place, whilst Laser Tools Racing’s Aiden Moffat secured another rostrum – the 25-year-old continuing his impressive run in the second half of the season.

Five drivers will go into the season finale at Brands Hatch in two weeks’ time with a mathematical chance of taking the title, with Sutton holding a 32-point advantage over Turkington with 67 still to play for. Ingram, Hill and BTC Racing’s Josh Cook are the other contenders currently in the hunt.

Sutton and Laser Tools Racing will also look to wrap up the Teams’ and both Independent Drivers’ and Teams’ titles at the Kent circuit, whilst BMW will aim to retain its Manufacturers’/Constructors’ crown.

There was cause for celebration for Halfords Racing with Cataclean’s Dan Rowbottom at Donington Park, as the local driver moved into an unassailable points lead in the Jack Sears Trophy.

Rounds 28, 29 and 30 of the 2021 Kwik Fit British Touring Car Championship will take place at the fantastic Brands Hatch Grand Prix Circuit on 23/24 October.

Gordon Shedden said: “I would never say it was comfortable, but it was nice to start from the front, get into turn one and just manage the pace as best I could. Dan [Lloyd] was pushing hard; I could see Rory [Butcher] coming… it was that onslaught after the safety car, but the Civic was great. Really, really good. What a boost for the team, it’s been a little bit up and down over the last couple of races, but to start at the front and get my first race wins of the year is absolutely superb.

“It’s just so close. As I’ve said, you do need the cards to fall your way and it just seemed whatever direction we turned for the last two or three events it’s not quite gone our way. I keep talking about momentum so hopefully we can keep that up towards the end of the season.”

Colin Turkington said: “The emotion of winning never gets any less. And when you get to this stage of the season, it all means so much more – the pressure’s on and starting on pole is no guarantee of winning the race, or even finishing on the podium.

“The key message is to thank the team for keeping my chin up after race two. They could see I was trying, giving it everything, and sometimes these things happen. So, I much prefer to win the race. My car was superb in that race. The 3 Series has just been blistering around here the past three years. I’ve won every time we’ve visited so big credit to Team BMW.

“The main job was to come out of Donington with a chance, and we’ve got a chance. Credit to Ash [Sutton], he’s been superb all year and kept scoring points. But we’re hot on his heels and there’s a lot of people chasing him down, me probably being the keenest one!”

Ash Sutton said: “I’m confident with the package we’ve got around us, so I feel like I’m in the best possible position to go to Brands Hatch in. As long as we maintain this in physical, mental and car performance, then we’ve just got to keep our nose clean, and fingers crossed it’s enough.

“After Silverstone, we thought ‘right, six more races.’ After Donington, it’s like ‘alright, three more races.’ So, every race at Brands I’m going to be counting down and it’s just a little bit more weight gets lifted off my shoulders with every race, every lap. It’s just immense pressure at the minute.”