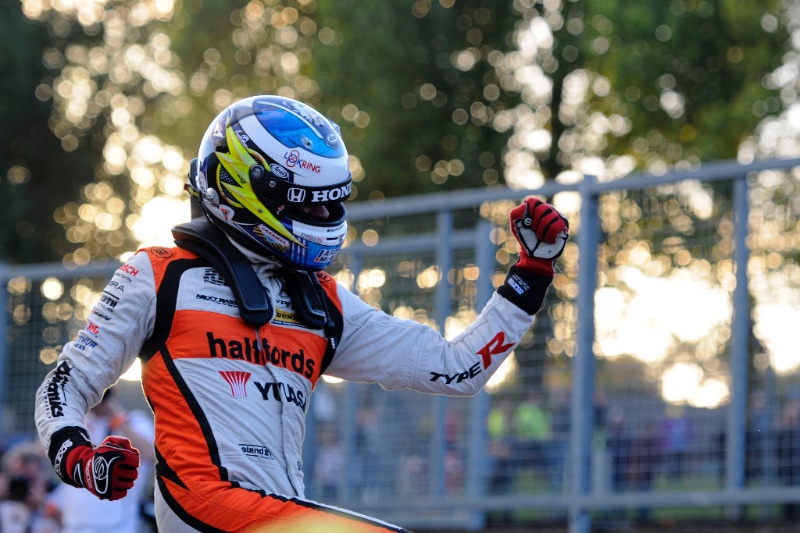 Deficit overcome as the Scotsman becomes a triple champion

The Scotsman needed to overcome a two point deficit to standings leader Sam Tordoff heading into the final race of the season, and the now triple champion made the all-important move by his rival on lap seven.

The duo were tussling over third place with Mat Jackson and Aiden Moffat already up the road, but it was all eyes of the title fight. The huge 45,000-strong crowd held its collective breath as Shedden hauled his Honda Civic Type R down the inside of Tordoff’s Team JCT600 with GardX machine on the run down to Clearways, before completing the move on the exit of Clark Curve.

Shedden fended off further attacks and even a late safety car period to maintain third position, superbly securing the title in the process. The Honda man had been fighting back throughout the year, following a challenging start to his title defence, and the 37-year-old finally returned the championship summit as the chequered flag fell on the last race of the season. Shedden’s success was all the more impressive as he became the first driver to win back-to-back titles since Fabrizio Giovanardi in 2007 and 2008.

Mat Jackson took a brilliant win for Motorbase Performance in the final contest, ahead of a stunning standout drive to second spot from Laser Tools Racing’s Aiden Moffat, whilst Adam Morgan’s Mercedes eventually finished ahead of the unfortunate Tordoff.

The day’s earlier races at the legendary Kent circuit had been won by Silverline Subaru BMR Racing’s Colin Turkington, with Rob Austin and Josh Cook scoring impressive podium positions in the opener. Plato and Shedden followed the Ulsterman home in the second bout.

Despite Tordoff narrowly missing out on the Drivers’ crown, West Surrey Racing secured the Manufacturers’/Constructors’ championship for BMW while Team JCT600 with GardX won the Teams’ titles.

After a season long battle with Michael Epps, the Jack Sears Trophy eventually went to Ashley Sutton, with the MG Racing RCIB Insurance driver starring throughout his maiden BTCC campaign.

When the dust settled on an unforgettable occasion, it was Shedden celebrating winning the most coveted prize in British motor sport for the third time in his career, pipping Tordoff by just two points.

Jackson claimed third overall ahead of Turkington, whilst Collard and Matt Neal rounded out the standings top six. Triple champion Neal was forced to miss the final race of the season after a heavy accident in the second encounter left him suffering with slight concussion.

Today’s action brought down the curtain on another record breaking season in the BTCC, which included 12 different race winners for the first time ever and an unprecedented eight title contenders going into the final weekend of the season.

The calendar for the 2017 Dunlop MSA British Touring Car Championship is already set, again comprising of 30 races across ten events at nine venues around the UK. The season will commence at Brands Hatch in April and conclude on the iconic Grand Prix circuit at the same venue in October.

Gordon Shedden said: “It’s unbelievable – an incredible feeling. I’ve felt really relaxed all weekend, but even going into race three, I thought it was going to be really difficult – and it was! In terms of entertainment, the BTCC has once again delivered in spades as the title battle went all the way down to the last race – and what a storming race it was! It was a shame Matt (Neal) couldn’t join in – it would have been good to have him up there pushing for the title too, because he has had really good pace today.

“All year, I’ve really stuck my neck on the line and made some bold, heart-in-the-mouth moves that were on the edge more often than not. After Croft back in June, it looked like we were down-and-out, but we stuck to our guns, kept plugging away and gave it absolutely everything to claw our way back. It just goes to show that every single point really does count in this championship.

“Winning the championship for the first time felt phenomenal, last year was a real rollercoaster ride and this year it was just a huge release of emotion. I might allow myself a few cups of tea and a Tunnock’s Teacake to celebrate tonight…

“Sam (Tordoff) has driven well all year. I’ve enjoyed clean racing all season, and even in that last race he was very fair. His time will come – and it won’t be far away.”

Sam Tordoff said: “It was obviously a shame not to win the title after leading for so long, but we gave it our all and didn’t do anything wrong. I don’t think we had a bad day today at all – we scored three strong results, but Gordon had a better one and ultimately the best man won. Still, looking at the season overall, we’ve stepped up to the next level and firmly established ourselves as championship contenders. I’m incredibly proud of myself, of the job done by everyone at WSR and the support we’ve had from BMW, JCT600 and GardX all season. We’ve ended the season as constructors’ and teams’ champions and honestly I couldn’t have asked for much more.”

Andrew Jordan said: “It’s nice to win a BTCC title again, even if it’s not the overall one, which was obviously what we were aiming for. After what happened in race one, it ended up pretty tight points-wise in the final Independents’ battle, and I’m sure I’ll feel a little bit sore in the morning! The guys did a great job to get the car fixed in time for race two, which was probably one of the best drives I’ve had as we came through the pack – and then it was all about securing the crown in race three. With a season in the Focus under my belt now, we have a very solid foundation to build upon in 2017. I’m very proud to have given Motorbase its first title in my first year with the team – but next year, we’ll definitely be aiming for the big one!”

Ashley Sutton said: “It’s been an absolutely unreal season, and I honestly can’t thank MG, RCIB Insurance and Triple Eight enough – without them, none of this would have been possible. My goal back at the start of the year was to win the Jack Sears Trophy, and with Jack’s sad passing, it now means even more. It’s just a shame he couldn’t be here today to present it to me – I’m actually feeling a bit emotional about it all. I’ve loved every minute of my first BTCC season.”

Alan Gow, Series Director, said: “It’s been a fantastic year and to go down to the final race once again is incredible. Both Sam Tordoff and Gordon Shedden have driven superbly throughout the season, but someone has to win it, and my congratulations go to Gordon and all the other winners. The format we have in the BTCC works and to have 12 different race winners and this exciting season climax tells you everything you need to know about the championship. We never rest on our laurels and the plan is always to come back bigger and better next season.”