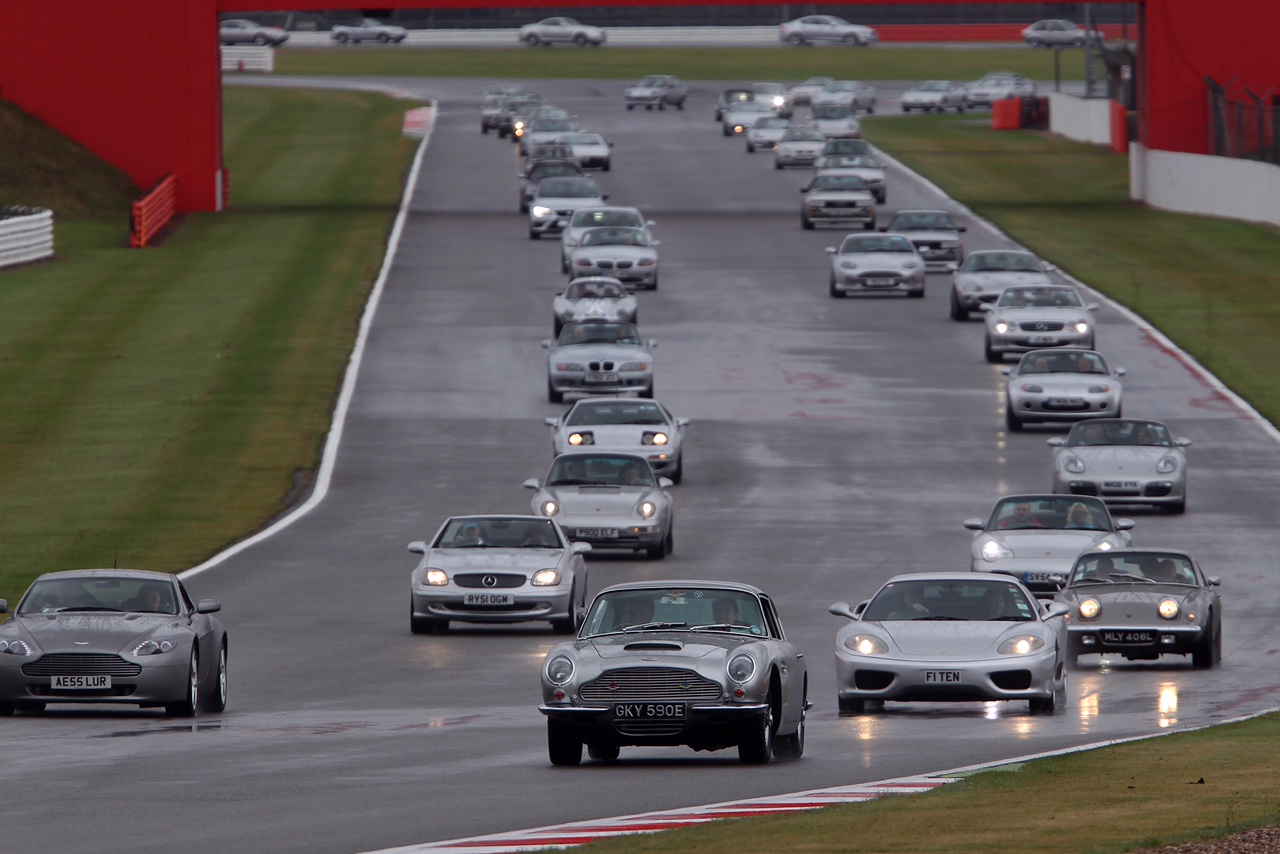 The return of the rain failed to wipe the smiles off fans’ faces as the 25th anniversary of the Silverstone Classic came to a close with a riot of racing on a distinctly unseasonal summer’s day.

This followed a glorious Saturday, which had seen the sun bask down on the circuit as unprecedented numbers enjoyed stunning racing, sparkling aerial displays and spectacular entertainment, topped by a memorable set from rock legends Status Quo into the evening.

In celebration of the event’s momentous milestone, a special Silver Sunday Parade brought together more than 200 silver cars from Land Rovers to Lexus’, MGs to Mercedes and Saabs to Ssangyongs – the Classic’s official car partner – on the hallowed Silverstone Grand Prix Circuit.

In addition to the Retro Run and other anniversary parades over the course of the weekend, that meant almost 1,500 privately-owned road cars took to the track, whilst fittingly at the legendary ‘Home of British Motor Sport’, the packed programme of racing delivered victories for iconic British marques Jaguar, Lotus and Aston Martin.

“All in all it has been another fantastic weekend!” enthused Event Director Nick Wigley. “On the Silverstone Classic’s 25th birthday there was entertainment right the way from first lights-out to the final chequered flag, while a staggering 120 car clubs all joined in the fun.

“Come rain and shine the racing was superb, and enjoyed by a record-breaking crowd – the first time ever that we have passed through the 100,000 barrier – and we completed the full programme safely. For that, I must say a big ‘thank you’ to our brilliant marshals, who dealt with everything the British summer could throw at the circuit with stoicism and a smile. We’re already counting down the days to next year’s Classic!”

Here’s how the final day unfolded…

Chris Ward began the race in one car, took the chequered flag in another, mastered the treacherous conditions and set fastest lap for good measure in a superb curtain-raiser.

The former chief Silverstone instructor grabbed the initial advantage in the Cooper-Jaguar T33, but oil smoke on the second lap precipitated an unscheduled pit visit and a significant delay. A subsequent stop-go penalty for speeding in the pit-lane rubbed salt into the wounds and ruled the car out of reasonable contention.

That promoted the scrap for second – waged between Frederic Wakeman’s Cooper-Jaguar T38, Gary Pearson’s Jaguar D-type and John Young’s C-type – into a tussle for the top spot that continued right the way through to the driver changes.

Once the order had shaken out, Pearson led Ward – who had now switched across to the ex-Fangio C-type he was sharing with Young – and Wakeman’s team-mate Patrick Blakeney-Edwards. Ward swiftly got the hammer down, and it was always a question of ‘when’ rather than ‘if’ he would overhaul Pearson for the lead, which he duly accomplished.

Pearson hung on to claim a very solid second, but behind, Blakeney-Edwards fell prey to a charging Simon Hadfield, whose Aston Martin DB3S had languished outside the top 20 when he took over at the wheel. Setting a searing pace, he scythed his way through the spray and snatched the final podium position from the Cooper T38 almost within sight of the chequered flag.

Following an aborted first start – caused by a multi-car midfield accident – the action got underway at the second time of asking behind the safety car. From the front row of the grid, Sam Wilson stormed into an immediate lead in his Lotus 20/22 and would never again be headed, although he was put under serious pressure by Jonathan Hughes’ Brabham BT6.

Simon Hadfield was again the star of the show, with a judiciously timed pit-stop and supreme wet weather prowess paving the way to a commanding victory.

As conditions and visibility deteriorated, the opening half of the race took place behind the safety car, and when the track went ‘green’, there was a Jaguar E-type duel at the front of the field between Rob Hall and James Cottingham.

Further back in the pack, Wolfgang Friedrichs’ Aston Martin DB4 GT and Martin Hunt in the AC Cobra had pitted under the safety car – whereas a number of others hadn’t – with the upshot that their respective team-mates Hadfield and Patrick Blakeney-Edwards returned to the track in first and second positions.

While Hadfield thereafter made good his escape, Blakeney-Edwards consistently happened upon traffic at precisely the wrong moment, allowing the pursuing Jaguars of Hall and Cottingham to close in and – ultimately – overtake him before the chequered flag.

Saturday winner Martin Stretton led throughout in his Tyrrell 012 – making it cause for a double weekend success, albeit in considerably more inclement conditions – but he was kept honest throughout by Sam Hancock’s Fittipaldi F5A.

Whilst Stretton made a mid-race break, Hancock closed in dramatically on the final lap when Stretton was inadvertently held up while lapping a midfielder in the Becketts complex.

Behind, there was a superb duel between Loic Deman’s Tyrrell 010 and Andy Wolfe’s Tyrrell 011 – ultimately resolved in favour of the latter – although by the end of the race, Nick Padmore had latched right onto their tail in the considerably older Lotus 77. Padmore pulled off a number of spectacular overtakes along the way as he worked his way up the order.

A largely shuffled order on the first proper lap of racing, owed to a number of cars pitting for their mandatory stops, meant the picture in this particular contest would take some time to clear.

Pole-sitter Martin O’Connell was left down in 20th position after his own early stop, but he would eventually go on to produce an utterly dominant drive.

The Chevron B8s of James Schryver and Hugh Colman traded blows in the opening exchanges but it was a silver Jaguar E-type wowing the crowds with a surging drive from 19th on the grid. Making the most of the treacherous conditions, its driver Julian Thomas grabbed the lead after weaving his way past the more powerful Chevrons, but any dreams of victory were dashed when he missed the pit window.

When the dust and drizzle settled it was O’Connell back in front as he produced a series of fastest laps on his way to winning the race by more than a minute. It was a fitting victory for O’Connell – his third of the weekend – and particularly with Chevron celebrating its 50th anniversary year. His success earned him the coveted Motor Sport magazine Driver of the Weekend Award.

Worsening weather later in the afternoon made for shortened races, and from pole position, the Honda Accord of Stewart Whyte led from lights-to-flag – although he had to stave off a fired-up Patrick Watts over the course of the final lap.

Behind the wheel of his Peugeot 406, the former historic rally champion clearly revelled in the grip-less conditions and had reduced Whyte’s advantage to less than a third-of-a-second at the finish line, posting the fastest lap of the race along the way.

Dutchman Jan Bot wound up a commendable third in a BMW E30 M3, and a spin into the barriers on the final lap for Neil Smith’s Alfa Romeo 156 elevated the colourful BMW 3.0CSL driven by Sam Hancock to fourth.

Spice machinery scored an impressive 1-2-3 although the duel for victory was far from straightforward. Steve Tandy and David Methley enjoyed a race-long battle with the latter’s C2 car initially flying from fourth on the grid into the lead.

Tandy remained hot on his heels and as the race entered its final stages he used the greater performance of his 6.5-litre Chevrolet-powered Spice SE90 GTP to blast back past into Copse corner.

The race had been led off the line by Tommy Dreelan’s striking Leyton House Porsche 962 before Tandy and Methley took over. Spice’s podium clean sweep was complete when Aaron Smith took third late on.

The second HGPCA race produced a second win for the impressive Tim Harvey in the ex-Bruce McLaren Grand Prix-winning Cooper T51. Jon Fairley led as the pace car released the field but former British Touring Car Champion Harvey wasted no time grabbing an advantage he was never to relinquish.

Behind, it was the front-engined Scarab of Julian Bronson that flourished in the conditions, slithering its way though from eighth on the grid to take an impressive second place. Will Nuthall claimed the final podium position with Fairley falling back to cross the finish line in fourth.

As the harder rain returned, the second Battle of Britain race had the honour of bringing down the curtain on the 25th anniversary 2015 Silverstone Classic. Mike Whitaker had won Saturday’s race in his TVR Griffith and he started from the front with Matt Nicoll-Jones’ Jaguar E-type lining up close behind in second. This time, though, the TVR had to play second fiddle as Nicoll-Jones snared the spoils. Behind, it was the mighty Mini Coopers of Jonathan Lewis and Italian Andrea Stortoni that revelled in the tricky conditions to finish third and fourth.