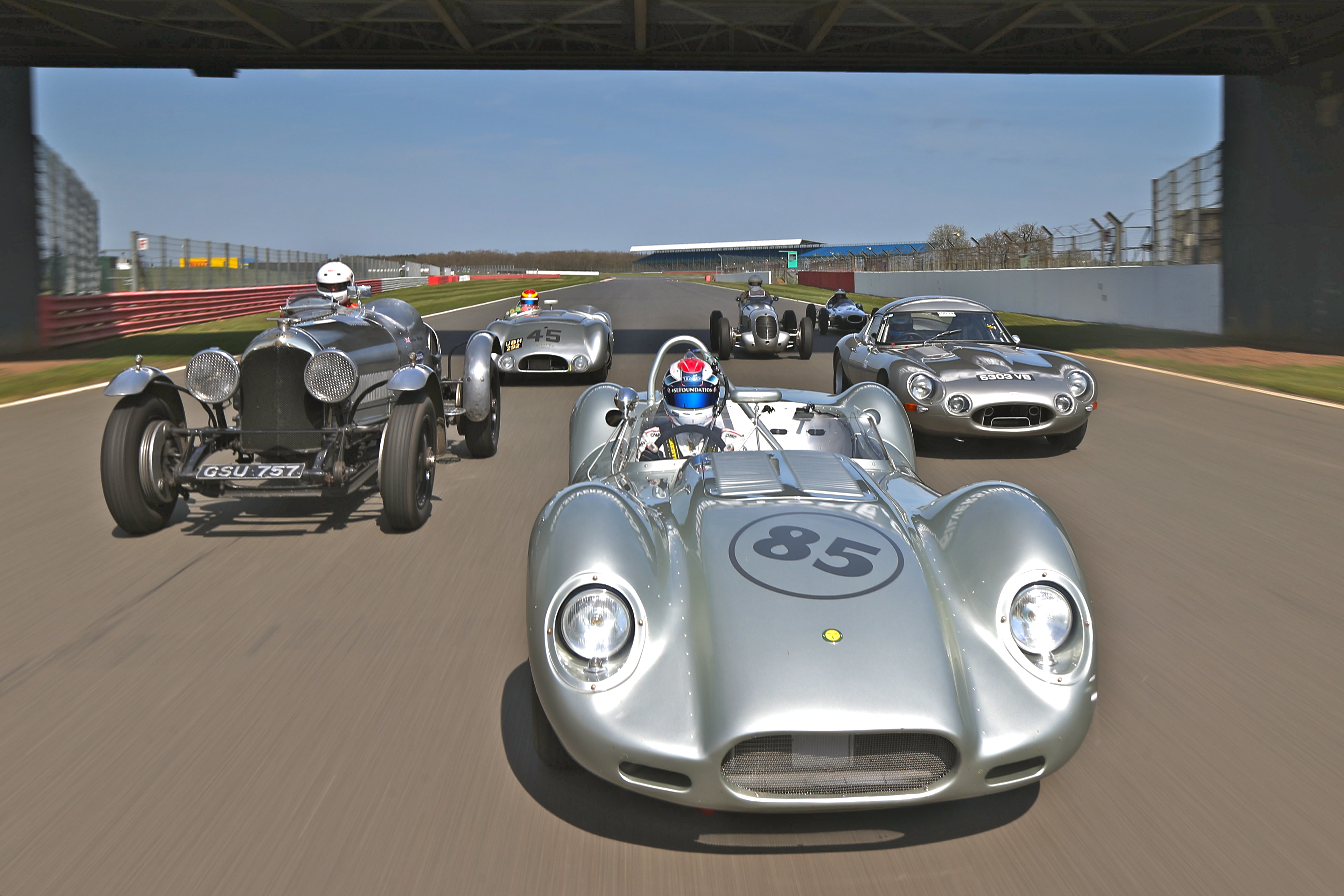 It’s now a quarter of a century since the very first historic festival at Silverstone, and this month’s 2015 edition of the Silverstone Classic (24-26 July) will celebrate the Silver Jubilee in typical record-breaking fashion.

The Classic of today has grown almost beyond all recognition since those early days and the sheer scale of this year’s 25th anniversary event will be hard to imagine. Both of the paddocks at Silverstone are once again needed to accommodate what is the biggest entry for any race meeting anywhere in the world, while the rest of the vast 800-acre Grand Prix venue is given over to a huge number of car club displays, attractions, activities, shops, aviation and so much more.

Tickets, which must be purchased in advance, provide access to both paddocks, trackside grandstands, the live music and the vast majority of the in-field attractions. Full details can be found on the official www.SilverstoneClassic.com website.

Back in 1990 the very first Historic Festival attracted an audience of around 20,000, a handful of car club displays and a modest 426 racing entries. Last year’s edition of what’s now The World’s Biggest Classic Motor Racing Festival played host to 94,000 spectators, 93 car clubs displaying 9,000+ classics while attracting a whopping 1,125 entries in the on-track grids. All are records set to be broken in this glittering Silver Jubilee year.

As well as Status Quo performing live at Saturday evening’s party, other special 25th anniversary celebrations include a track parade on Silver Sunday for more than 200 owners of pre-registered silver cars from past and present generations. The two stand-out FIA Masters Historic Formula One races on Saturday and Sunday afternoons have also been extended to 25-minutes while the JET Village Green will see the return of the Scarf and Goggles, a hugely iconic and popular centrepiece to early Historic Festivals.

Two special awards have also been introduced to honour the driving forces behind those pioneering events. The Stuart Graham ‘Scarf and Goggles’ Award will be presented to what’s judged to be the most admired car competing at the Classic while the Mervyn Garton ‘Scarf and Goggles’ Award will acclaim the best off-track visitor attraction. Both will be perpetual accolades awarded annually as from this year’s event.

FORMULA ONE TO THE FORE

Silverstone is synonymous with Formula One – it hosted the very first round of the FIA F1 World Championship and earlier this month witnessed Lewis Hamilton completing a superb hat-trick of British Grand Prix victories. So it’s no surprise that so much of this glorious F1 history plays a central role at the Silverstone Classic. Indeed, this year’s line-up is the most comprehensive yet, ranging from 1938 Maserati 6CM to a Super Aguri as raced by Takuma Sato as recently as 2006.

A superb grid of more than 50 priceless cars will line up for the pair of evocative races for the Maserati Trophy for HGPCA Pre ’66 Grand Prix Cars on Saturday and Sunday afternoons. While Cooper-Bristols, Aston Martin DBR4s and Maserati 250Fs will be representing the front-engined era, large numbers of Coopers, Lotuses and Brabhams will be epitomising the dawn of the rear-engined era that followed in the early sixties.

The FIA Masters Historic Formula One Championship puts the spotlight on the 3-litre epoch dominated by Ford DFV powered machines created by British-based teams such as Arrows, March, McLaren, Shadow, Tyrrell and Williams. A record field of close to 40 cars has been assembled which includes a pair of recently resorted LECs as raced in period by David Purely. An intriguing entry is the 1981 Williams FW07C with former F1 driver Paulo Barilla at the wheel.

Bringing the F1 story almost up to date is the new high-speed demonstration for the amazing sights and sounds of the Legends of Formula One. This will feature more recent F1 cars from V8, V10, V12 and turbocharged generations as raced between 1990 and 2006 by champions such as Damon Hill, Nelson Piquet, Michael Schumacher, Ayrton Senna and Jacques Villeneuve. It’s an addition that no F1 fan will want to miss and completes the most comprehensive line-up of F1 machinery ever seen at the Silverstone Classic.

Three new grids have been introduced for the Silver Jubilee edition of the Silverstone Classic – and all three of these boast capacity 58-car entries. Indeed the HSCC received no fewer than 90 applications for the Guards Trophy – a 40-minute race on Sunday afternoon for pre ’66 GT and pre ’69 sports racing cars which will help to celebrate 50 years of Chevron, the Bolton-based racing car company founded by Colin Bennett in 1965.

Saturday’s schedule sees the return of the Pre-War Sports Cars in another 40-minute showdown this time dedicated to aviator and adventurer Glen Kidston who won the 1930 Le Mans 24 Hours in a Bentley. In a race named after one of the famous ‘Bentley Boys’ you need a Bentley or two – the Silverstone Classic has 13 along with ten Aston Martins, eight Fraser Nashes plus a magical mix of Alfa Romeos, Bugattis, Delahayes, Lagondas, Morgans, Sunbeams, Talbots and Vauxhalls.

Honouring the 75th anniversary of the famous WW2 aerial conflict, the pair of new JET Battle of Britain Trophy races will feature another packed 58-car field with a patriotic cocktail of pre-1966 British cars. As hoped the two 20-minute encounters over the weekend have attracted a diverse – as well as capacity – line-up including Aston Martin DB4s, Austin Healeys, Jaguar E-types, Lotus Cortinas, Lotus Elans, MGBs and the inevitable Mini Coopers. Further marking the achievements of those Winston Churchill called ‘the few’, the skies above Silverstone (itself, of course, a WW2 RAF base) will see daily Battle of Britain Memorial Flight displays from a Spitfire, joined by a Hurricane on Sunday.

A FEAST OF FABULOUS SPORTSCARS

More than 50 years of epic GT and sports car racing history will also be rolling back the years during this month’s Silverstone Classic. The Royal Automobile Club Woodcote Trophy For Pre ’56 Sports Cars will see Jaguar D-types and Aston Martin DB3Ss to the fore. The Stirling Moss Trophy for Pre ’61 Sportscars will star at least seven Lister Jaguars. The Royal Automobile Club Tourist Trophy for Historic Cars features pre ’63 GTs such as Aston Martin DB4 GTs and early E-types. International Trophy for Classic GT Cars is for pre ’66 GTs such as the AC Cobra, TVR Griffith and latter day E-types. FIA Masters Historic Sportscars is another with a full entry, this time filled with Lola T70s, Chevron B16s and Ford GT40s.

The two races for Group C prototypes – notably that at sunset on Saturday evening, are always among the highlights; this year’s favourites include the Silk Cut Jaguar, Mercedes C11 and Porsche 962 as well as several new additions including the Aston Martin powered EMKA and Royal Mail liveried Ecurie Ecosse. Completing the bill are the high-speed demonstrations for the 90s GT Legends – these include Jaguar XJ220s, McLaren F1s, Porsche 911 GT1s plus the incredible Mercedes-Benz CLK GTR from 1997.

Two of the greatest saloon car racing ages also come under the Silverstone Classic – and both are real crowd-pleasers. The Warwick Banks Trophy for Under 2-Litre Touring Cars (U2TC) takes us back to the first half of the sixties recreating those great battles between Lotus Cortinas, Alfa Romeo Giulia Sprints, BMW 1800s and swarms of Mini Coopers. Saturday morning’s 50-minute encounter with a mandatory pit-stop and optional driver change is always a fiercely fought affair. Last summer BTCC champions Gordon Shedden and Matt Neal were right in the thick of the fray until their Lotus Cortina succumbed to a mechanical issue – the pair now are back seeking retribution.

Appealing to perhaps a younger audience are the two Super Touring Car Trophy races for the high-tech BTCC cars from the 1990s. It was a thrilling time when Ford Mondeos, Vauxhall Vectras, Honda Accords, BMW 3 Series and Renault Lagunas were built by top F1 and WRC teams and raced by international stars. Those cars are back along with some of their illustrious drivers. John Cleland, Tim Harvey and Patrick Watts are among those confirmed for 2015.

The historic racing scene has stars of its own – drivers such as Martin Stretton, Chris Ward and Gary Pearson are masters at racing cars from yesteryear, often even faster than they went in their halycon heydays – but they are now joined by an ever-growing number of past and present champions all wanting to savour the thrills of historic motor sport.

The names of Paulo Barilla, John Cleland, Tim Harvey, Matt Neal, Gordon Shedden and Patrick Watts have already been highlighted but there are many more famous names among the hundreds and hundreds competing.

1988 Le Mans winner Andy Wallace is racing a Jaguar D-type in the Stirling Moss Trophy; tin-top legend Steve Soper back is behind the wheel of a Rover SD1 Vitesse in the Super Touring Trophy as well as a Ford GT40 in the FIA Masters Historic Sports Cars; Le Mans class winner Nick Leventis is racing a Ferrari 246S, again in the Stirling Moss Trophy; sportscar hot-shoe Marino Franchitti is racing a Lola T70 in the FIA Masters Historic Sports Cars; FIA GT Champion in 2000 Jamie Campbell-Walter is piloting a McLaren F1 GTR ‘long tail’ among the 90s GT Legends and recent BTCC race winner Adam Morgan in a BMW M3 is another to be found in the Super Touring Trophy.

If the sensational racing is the Classic’s heartbeat then the enthusiastic clubs are its backbone. This year a record number of 120 will be displaying more than 10,000 privately-owned classic cars turning the Silverstone infield into an amazing motor museum. Just about every single model and marque is represented from Ferraris and Lamborghinis to Pipers and Panthers.

As well as all the racing action, the Silverstone Classic is also renowned for its rocking live music concerts. Many notable bands have performed in recent years including: 10cc, the Yardbirds, Canned Heat, the Hollies and Bonnie Tyler. Topping this year’s Silver Jubilee birthday party bill, though, is legendary chart-toppers Status Quo. It promises to be quite a show accompanied by dramatic balloon glow and aerial twilight pyrotechnic display.

Friday night’s music line-up is headed by Paul Young accompanied by OI&B Zucchero with two top tribute bands – Fleetwood Bac and the ZZ Tops – also on the bill to get everyone into the mood. Admittance to both concerts is included FREE in all admission tickets.

The Silverstone Classic has become almost as well renowned for its vast array of family-friendly off-track activities as it has for being ‘The World’s Biggest Classic Motor Racing Festival’. Indeed the sheer scale of today’s extravaganza is hard to comprehend with the vast 800-acre Silverstone estate almost entirely given over to an amazing assortment of attractions, activities, displays, shops, aviation, auctions, adrenaline experiences, taster sessions, passenger rides, driving experiences, fun fairs and so much more wonderful family entertainment. What’s more, like the music, much of this is included totally free in the ticket price.

All tickets for the 25th anniversary Silverstone Classic must be purchased in advance. Adult admission starts from £40 and full details – together with hospitality packages and weekend festival camping – can be found on the official website: www.SilverstoneClassic.com.