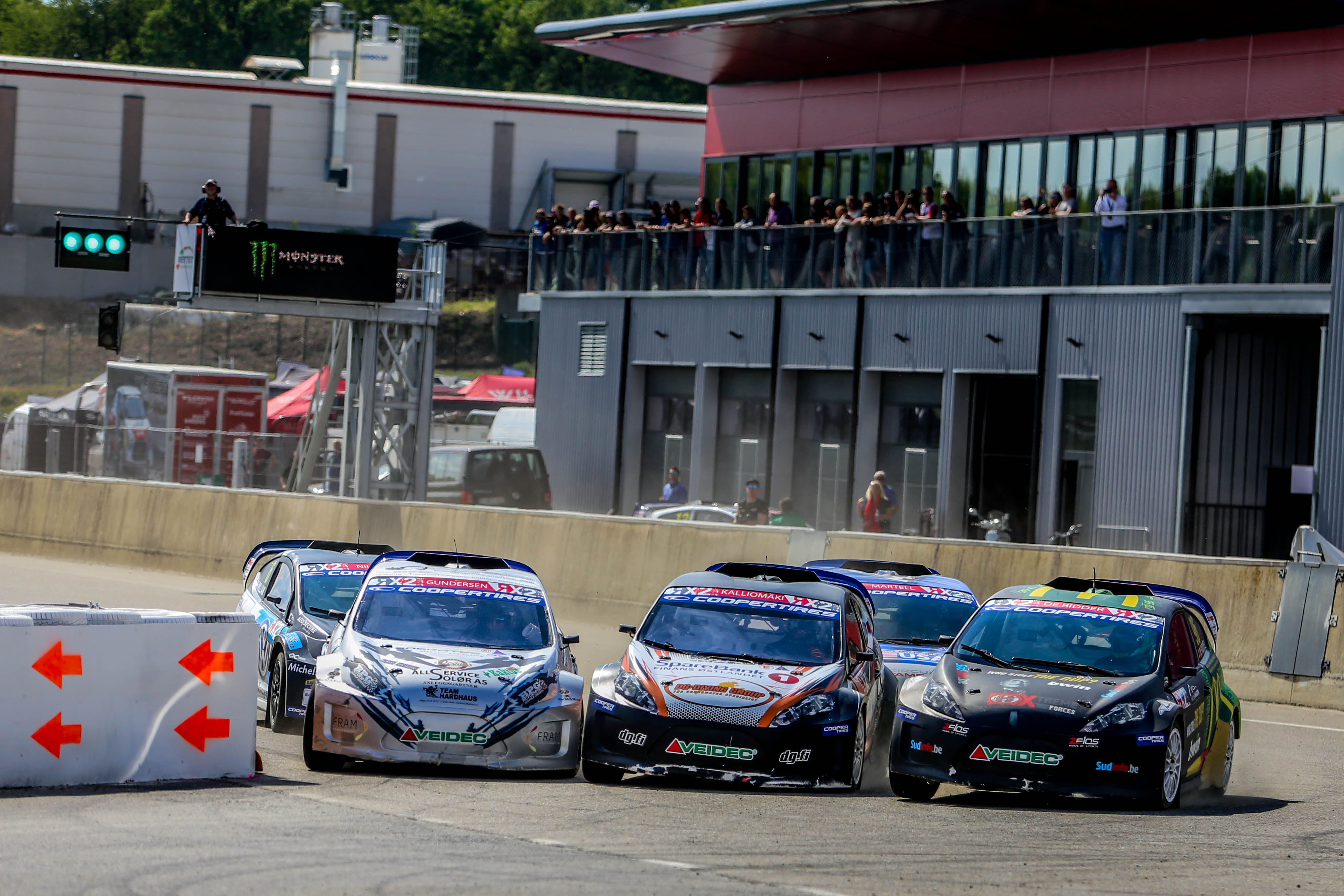 Making his full-time series debut following a one-off appearance at Höljes last season, Gundersen was one of the pace-setters from the outset at Mettet, topping the timesheets in Q2 and placing second in two other qualifying rounds to secure pole position for his semi-final.

A sluggish getaway very nearly resulted in the 23-year-old not making it through to the all-important final, but his challenge was revived when a misfire for early leader Oliver Eriksson dropped the Swede down the order.

From the back row of the grid in the final, Gundersen avoided first corner contact and profited from a mistake by Jami Kalliomäki to snatch the advantage on lap two – and thereafter, he never looked back. Team-mates and countrymen Sondre Evjen and Henrik Krogstad joined him on the rostrum, with William Nilsson competing JC’s joy close behind in fourth.

Vasiliy Gryazin and Gundersen were the class of the field throughout the qualifying stages at Mettet, with the pair sharing the fastest times between them – three for the Latvian and one for the Norwegian.

Sports Racing Technologies (SRT) star Gryazin came out-of-the-blocks in flying form and looked very much the man to beat going into the semi-finals. Gundersen was invariably hot on his heels, with home hero Guillaume De Ridder shrugging off the disadvantage of unfavourable starting spots with a series of gritty performances to place third in the intermediate classification.

Olsbergs MSE stablemate Oliver Eriksson ably proved his credentials at RX2 level just behind in fourth, with surprise package Kalliomäki an impressive fifth courtesy of a brace of race wins and the second-quickest time in Q4. Evjen rounded out the top six after battling back from a slow start on Friday.

The weather turned on Sunday, leaving the track greasy from light rain and whilst Gryazin pulled away well from pole position in semi-final one, De Ridder found himself under attack from a fast-starting Kalliomäki into the first corner. The SET Promotion teenager was in-turn pushed from behind by Haug, with the concertina effect putting fans’ favourite De Ridder out on the spot with broken steering and ending the partisan crowd’s hopes of a famous home victory.

Haug was similarly eliminated from contention and Syversen substantially delayed, paving the way for Gryazin, Kalliomäki and Nilsson to advance comfortably through to the final. Demonstrating plenty of sisu, the Finn kept the race leader honest throughout and his pressure resulted in a few late errors from his Latvian rival, but none significant enough to prise open the door.

Eriksson vaulted into the lead from the outside of the front row in semi-final two, with Evjen similarly demoting pole-sitter Gundersen to sneak through into second. As the Swede pulled away, his two Norwegian pursuers exchanged positions on lap two, but a misfire would subsequently drop the Olsbergs MSE driver to fourth and out of the reckoning. The prime beneficiary, though, was neither Evjen nor Gundersen, but rather Krogstad, whose early joker leapfrogged him ahead of his two team-mates as all three progressed.

From pole position, Gryazin again got a good launch but found himself tagged into Turn One by Kalliomäki, who was already up the inside of Krogstad. The contact ended the SRT man’s challenge and left RX2 rookie Kalliomäki at the head of the order from Gundersen, Evjen, Nilsson and Krogstad.

A broken driveshaft caused by the first corner contact sent the Finn into a spin on lap two, however, promoting Gundersen into the lead, forcing Evjen into the joker lap and momentarily delaying Nilsson. Once the dust had settled, Gundersen emerged narrowly ahead of Evjen, with the precocious Krogstad jumping Nilsson when the Swede jokered to round out the rostrum. The ailing Kalliomäki trailed across the line in fifth but was later disqualified for his role in the Turn One fracas.

Ben-Philip Gundersen (1st): “The weekend certainly couldn’t have gone much better from my perspective! It definitely exceeded our expectations, which were simply to reach the semi-finals. I was happy with our speed in the qualifying races, and to rank second in the intermediate table was an excellent start. The semi-final was a bit more touch-and-go; I got lucky with Oliver’s problem, and I knew it was going to be difficult in the final from the rear of the grid. As it turned out, though, that actually played into my hands because being slightly further behind going into Turn One, I had more time to read the situation developing in front of me and could react accordingly to put my car in the right place to avoid it all. After I got into the lead, it became a matter of trying to control the pace, and I must admit, I was pretty nervous in the closing laps. We have seen here just how competitive RX2 will be this year, and you really need to drive at 110 per cent if you want to be at the front. The fight for the title will clearly be tough, but I can promise you we will give it our very best shot!”

Sondre Evjen (2nd): “Overall, it’s been a really positive first round of the season, although our weekend didn’t get off to the best of starts, getting stuck behind other drivers in both Q1 and Q2 and not being able to exploit our potential. That meant I had to fight really hard in the remaining qualifying races to claw my way up the order. I had an enjoyable battle with my two team-mates and Oliver in the semi-final, and it was a shame that he picked up the misfire because he really didn’t put a foot wrong. In the final, we lost out slightly at the start and then when Kalliomäki went off, I didn’t want to drop time by braking to avoid him so I opted to take an early joker instead. It was a split-second decision, but fortunately, it worked out reasonably well. After that, Ben-Philip and I were fairly evenly-matched – he was faster in some parts of the track and I was faster in others – and congratulations to him on his win. It’s been a fantastic weekend for the team – I honestly don’t think any of us could have dreamed of this kind of result coming here. As for me, I’ve now had two runner-up finishes in a row, so next time, we need to push for the top step!”

Henrik Krogstad (3rd): “Like most of the circuits on the calendar this season, Mettet was new to me so I had to learn the lap during free practice but I managed to get a feel for it pretty quickly, which was encouraging. We didn’t have the luck of the draw in qualifying in terms of our grid positions – I soon discovered that being on the outside line going into Turn One here is a real disadvantage – but our speed was good and we were up in third position until Q3, when a fuel pump sensor issue caused my engine to repeatedly cut out. Without that, I think we could have vied for a front row start in the semi-final, which may have changed the overall outcome but to finish third on my debut is nonetheless a great result and our early joker tactic seemed to pay off. Also, my rear wheel was bent after the opening lap contact in the final which made for an added challenge, so all-in-all, I have to be happy to come away with a podium – particularly as I still have a lot to learn in this series. One thing is for sure – with so many good drivers in the field, the level in RX2 is extremely high and we’re in for a long, tough season ahead.”

Andreas Eriksson, RX2 International Series presented by Cooper Tires CEO: “What a way to kick-start the second season of RX2! We’ve seen drama, excitement and some incredible racing from our returning drivers and series newcomers, which all promises well for a thrilling campaign ahead. Right from the start of the weekend, it was clear that there was not much to choose between our 17 high-calibre competitors, and a great many of them enjoyed their moments in the sun at one stage or another. In Ben-Philip Gundersen, RX2 has a new and very deserving race-winner, and I must congratulate Joel Christofferson and JC Raceteknik on a milestone result – getting one car to the final in a series as fiercely-contested as this is a challenge in itself, but to lock out the top four places is quite remarkable. We also saw terrific performances from Vasiliy Gryazin, Guillaume De Ridder and Oliver Eriksson, and whilst they ultimately went unrewarded through no fault of their own, they will all come back fighting and ready to do battle for the leading positions again next time out at Silverstone. We look forward to more high-speed RX2 thrills there.”