SILVERSTONE GEARS UP FOR ANOTHER SIZZLING CLASSIC 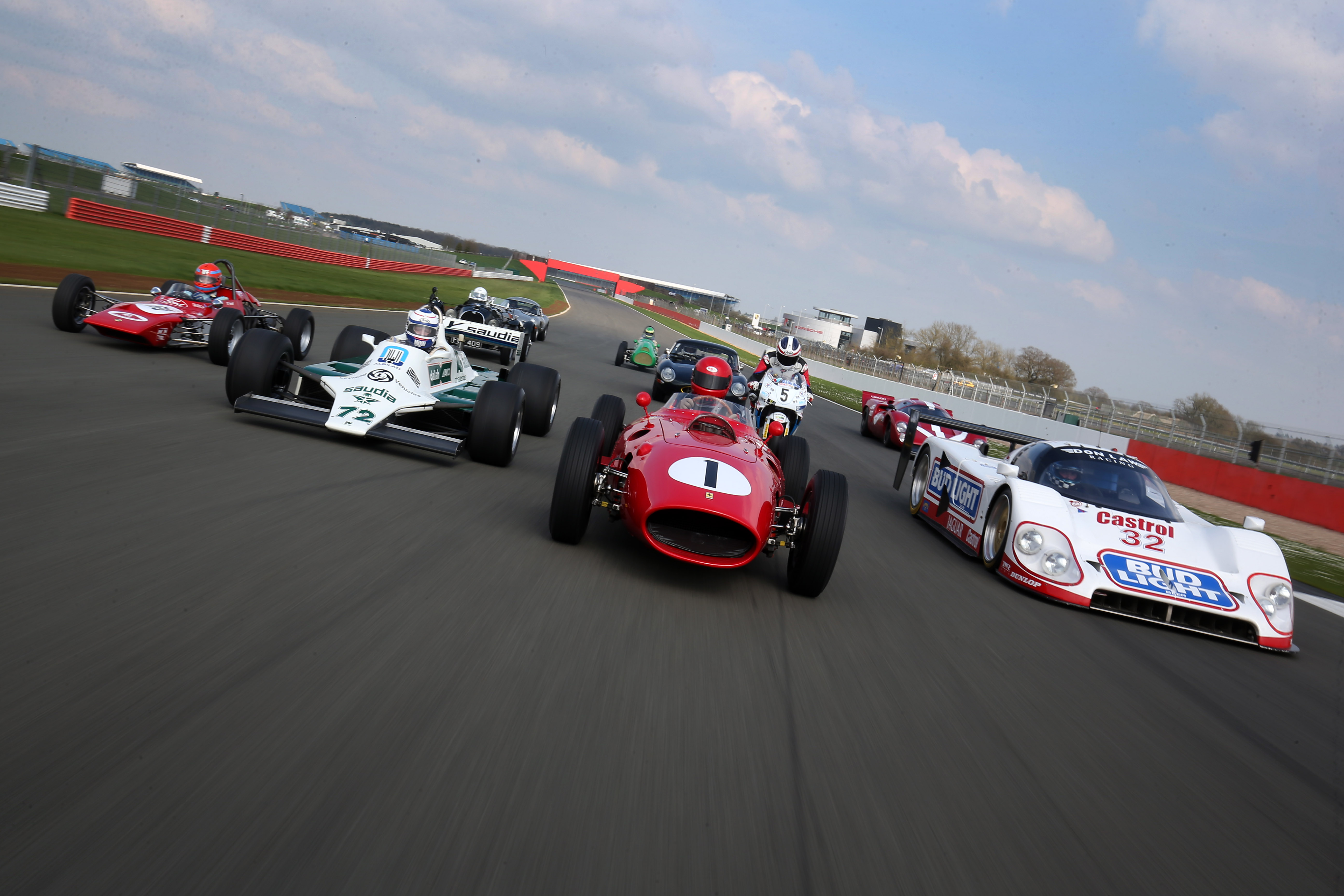 Full plans for the latest illustrious chapter in the Silverstone Classic’s remarkable history were confirmed at the official Media Preview staged today (Thursday) at the Home of British Motor Racing in Northamptonshire.

The message is loud and clear: this summer’s Classic (28-30 July) will be the biggest and best yet.

All the highly successful ingredients that have attracted more than 100,000 visitors for the past two summers are back on the packed three-day entertainment programme, now further embellished with some notable new innovations and additions to deliver even more great family entertainment. This year’s standout bill features exciting new races, a special world record anniversary parade, more off-track entertainment for all ages than ever before, the largest ever car club attendance, evocative live music concerts with chart-topping songs from the sixties and eighties plus an impressive line-up of racing celebrities.

“We have stellar event lined up for this summer,” confirmed Nick Wigley, CEO of event organiser, Goose Live Events. “We are constantly reviewing every aspect of the Silverstone Classic, and feedback has taught us that its three key attributes for fans are the absolute quality, scale and breadth of the racing content, our access all areas policy and the all-inclusive nature of the tickets.

“It’s a fantastic event packed full of entertainment, and we will continue to build upon all the positive elements from last year’s spectacular. Ticket sales are currently up 17 per cent on the same stage in 2016, which is very encouraging, and we are selling far more three-day tickets than ever before. We already have a record number of car clubs registered to attend, too, so all the signs are pointing to the biggest and best Silverstone Classic yet.”

Indeed, with the largest number of competition cars and the widest variety of historic racing grids seen anywhere on earth, the Silverstone Classic is the premier event on the international historic racing calendar.

As ever, this summer’s unrivalled bill includes all of Europe’s leading historic racing championships for Formula One, single-seater, GT, touring and sportscars from motor sport’s most celebrated eras – with some 130 iconic cars turning out to test today. The weekend will pack in an impressive 23 races in total – many boasting in excess of 50 entries.

The Silverstone Classic celebrates not only racing cars but also racing bikes from yesteryear, with former world champions Wayne Gardner and Freddie Spencer in attendance today to promote the return of World GP Bike Legends to the line-up in July.  Former GP stars will rev up on a stunning array of screaming two-stroke 500cc bikes from the golden age of Grand Prix motorcycle racing, in a Saturday parade that is sure to be a leading fan favourite once again.

Described as the biggest, baddest racing motorcycles ever to see a track, these much-missed 200+mph monsters dominated the top flight of bike World Championships for almost three glorious decades.

Back in the eighties, both Gardner and Spencer won the British Motorcycle Grand Prix at Silverstone aboard these 500cc beasts and both champions will be reliving those victories on their return to the superfast Northamptonshire venue at the Classic.

“These two-stroke 500cc bikes are exceptionally special to ride and produce a unique sound,” remarked Gardner, for whom 2017 marks 30 years since his world title success. “I remember starting out as a young boy and the dream I had; I used to look up to people like Freddie – he was one of my heroes. I never gave up and continued to chase my dream, and eventually dreams do come true if you put in enough passion and commitment.”

Emphasising the amazing variety of wonderful engines at the Classic, Spencer also took part in a special ‘Sound Off’ – his two-stroke Yamaha YZR 500 joining a four-cylinder Mini Cooper S, a six-cylinder F2 Cooper Bristol, a Lola T70 Spyder Can-Am car and a Jaguar XJR12 with V12 power. All five first revved up in the pits and then blasted past the Silverstone Wing, leaving onlookers to decide which machine sounded the best in a forthcoming online vote.

Tiff Needell was another high-profile name in attendance at today’s Media Preview. The former grand prix driver and Top Gear presenter will be joining the FF1600 fray this summer, in addition to fronting ITV4’s coverage of the event.

“I remember being at Brands Hatch as a 15-year-old spectator for the very first Formula Ford race,” he recalled. “I subsequently entered a competition for a Lotus 69F, which I won, and after scraping the rust off my tow car, I transported the little Lotus to races up and down the country.

“Formula Ford has always been a superb training ground, nurturing the formative careers of some of the greatest drivers the world has ever seen – and it gave me the breaks I needed to become a professional racer. With the incredible slipstreaming opportunities these cars offer, there’s sure to be some superb racing at the Classic here in July.”

Needell, Gardner and Spencer will also be part of the new Celebrity Challenge Race. Other famous faces present included Olympic gold medallist Mark Hunter, adventurer Charley Boorman and newly-announced ‘Wheeler Dealers’ host Ant Anstead, all of whom will get a chance to experience the Austin A35 on Silverstone’s legendary GP circuit.

“I’m always on the lookout for opportunities to have a bit of fun, and everybody will be up for the challenge,” enthused Boorman. “It’s going to be a fabulous weekend.”

Jaguar has extended its involvement as an Official Partner, with an even bigger presence both on and off-track. This year’s event welcomes the Jaguar Classic Challenge for the very first time on a special invitational basis. It features a mouth-watering grid of GT, sports and saloon cars from the marque’s celebrated past and is sure to be yet another crowd-pleasing addition, whilst a showcase on the infield of Copse Corner and the return of the F-TYPE Experience – which proved such a winner with visitors last summer – are further indicators of the marque’s outstanding commitment.

The Classic’s biggest ever turnout of Car Clubs is expected to join the festivities at Silverstone this summer, with already more signed up than attended last year’s event. Over 10,000 privately-owned classics will be proudly displayed during the course of the three-day event, with anniversary parades set to include the Jaguar XJ220, Fiat 500, Ferrari OC, Lotus 7, TVR and TR.

All were well-represented in the Silverstone Media Day paddock, as was Silverstone Auctions, previewing the competition cars that will go under the hammer on the Thursday evening of the event, followed by a two-day sale of classic cars and automobilia.

Williams will also be marking the 40th anniversary of its Formula 1 debut in the 1977 Spanish Grand Prix at this year’s Classic and today, to help announce the celebrations, Nigel Mansell’s 1992 title-winning car returned to Silverstone for the first time since the British hero won on home soil 25 years ago.

In other new entertainment, the enduringly popular Mike Brewer Car Clinics presented by eBay will now be held on both the Saturday and Sunday of the event, while another eBay Restoration Live is sure to fascinate visitors as it did last year. Once restored to its former glory, the chosen car will be sold, with all proceeds going to the Silverstone Classic’s official charity partner, Prostate Cancer UK.

Returning family favourites include the JET Village Green complete with the Scarf & Goggles pub, dramatic Street Car Shoot Outs, air shows, a shopping village now with its very own Town Square and live music from the Bootleg Beatles, Tony Hadley and the Dire Sraits Experience – all included in the overall ticket price.

With so much to experience and enjoy from dawn ‘til dusk (and beyond), it is no surprise that more and more festival-goers are taking advantage of special tickets to spend the entire weekend at the Silverstone Classic. Early Bird ‘Three-Day’ and ‘Family’ tickets remain available until the end of March.

Full details of all 2017 ticket prices – as well as hospitality and camping options – can be found on the silverstoneclassic.com website.

All the latest news is also available via the official silverstoneclassic.com website and via the event’s vibrant social media platforms.