SINGING IN THE RAIN AT SILVERSTONE CLASSIC 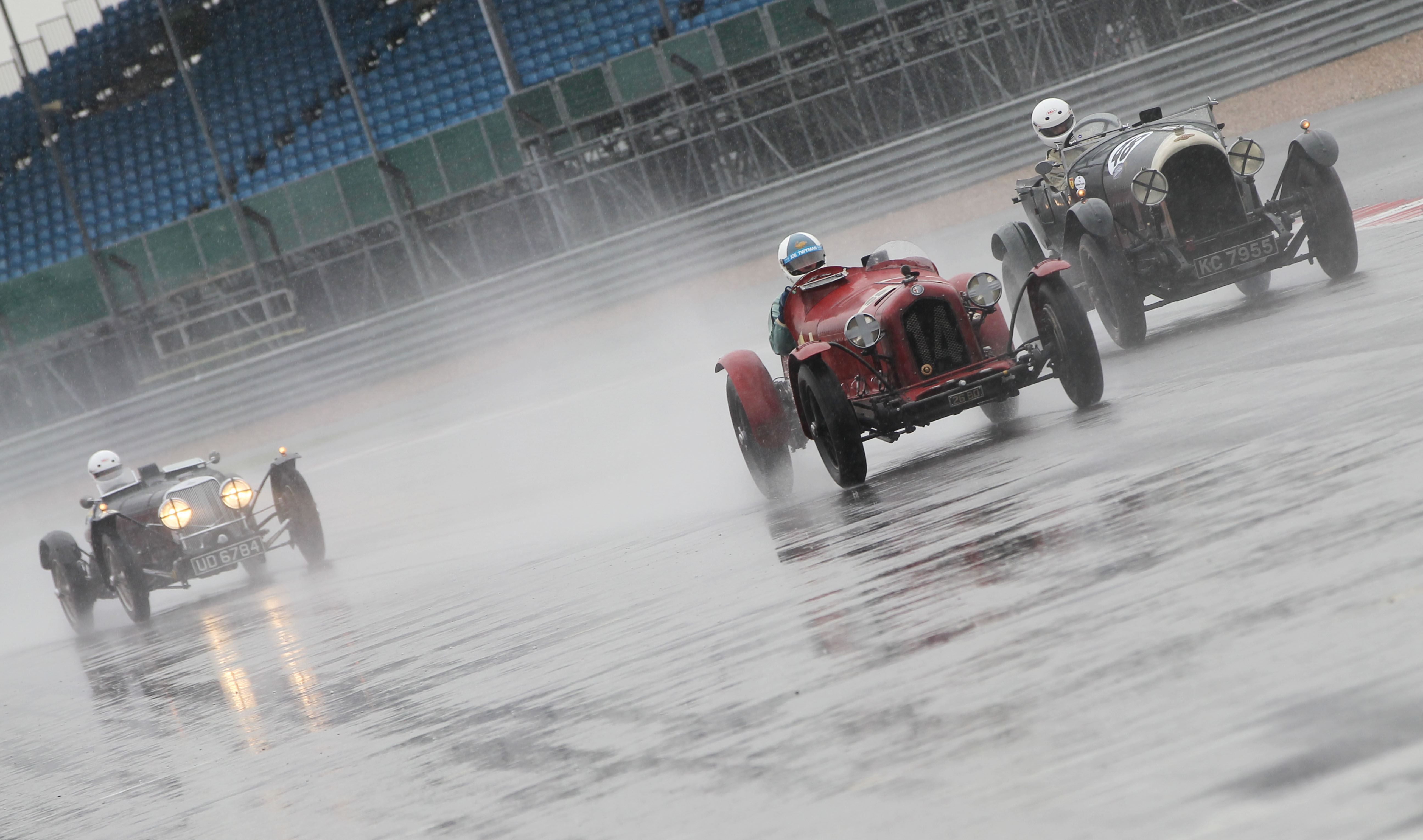 Rain failed to dampen spirits as the Silverstone Classic began its 25th birthday celebrations in fine style today (24 July), getting into gear with an intoxicating high-octane blend of fast-and-furious on-track action and family-friendly off-track entertainment.

A summer spectacular is firmly in forecast for the forthcoming two days, after more than 1,000 racecars completed their preparations and duelled it out during qualifying around Silverstone’s full 3.66-mile Grand Prix Circuit at the World’s Biggest Classic Motor Racing Festival.

Thousands of hardy fans refused to let the weather rain on their parade and turned out in force to enjoy no fewer than 14 qualifying sessions and a well-received ‘Legends of Modern Formula One’ demonstration – a new innovation for 2015 and bringing together iconic cars raced by the likes of multiple world champions Michael Schumacher and Nelson Piquet.

Jonathan Milicevic drew the day’s first blood in his Cooper T59 – appropriately enough sporting No.1 on its side – by annexing pole position. Milicevic was briefly threatened by Sam Wilson’s Lotus 20/22, but responded to secure the prime starting spot for tomorrow’s race. Wilson settled for second by the narrowest of margins from Jonathan Hughes in his Brabham BT6, with early pace-setter Andrew Hibberd fourth and Chris Drake claiming seventh and fastest-in-class in an Elva 300 that is understood to be the last single-seater ever raced by Formula One supremo Bernie Ecclestone.

This qualifying session took place in very wet conditions. The 1931 Talbot 105 Alpine of Richard Evans and Gareth Burnett scythed its way through the spray to steal pole position, albeit only just from Frederic Wakeman and Pat Blakeney-Edwards in the 1928 Frazer Nash Super Sports. Matt Grist placed third in the beautiful 1934 Alfa Romeo Tipo B P3 Mille Miglia, whilst Nick Pellett’s Sunbeam Tourist Trophy made the grid despite being the oldest car at the event – having celebrated its 100th birthday last year!

The Warwick Banks Trophy for Under 2 Litre Touring Cars

This class witnessed a thrilling duel for supremacy between a colourful and eclectic field of Austin Mini Coopers, Ford Lotus Cortinas, Alfa Romeo Guilias and BMW 1800s, with the treacherous track surface palpably playing into the hands of the nimble and fleet-footed Minis. Jonathan Lewis set the pace in his Cooper S for the majority of the session – explaining that he likes ‘daft conditions’ and quipping without a hint of irony that he was keen to ‘make hay while the sun shines’ – only for a flurry of late improvements to overturn the order.

A last-gasp flyer elevated Robert and Josh Beebee’s Mini to pole position, with former British GT Champion Bradley Ellis snaring the outside front row spot in the Mini he is sharing with Adrian Barwick. Matt Kelly and Lewis wound up third, with other notable competitors including Jackie Oliver in seventh in a BMW 1800, Mike Jordan eighth in a Lotus Cortina and current BTCC team-mates Gordon Shedden and Matt Neal 14th in their Team Dynamics-prepared Cortina.

Simon Hadfield was the star of the show, producing a superb late effort in an Aston Martin DB3S to see off a two-pronged attack from Chris Ward. Even yellow flags could not scupper Hadfield’s charge, as he pinched pole position from under the nose of Ward, who qualified both second in the JD Classics Jaguar C-type with John Young and third in the Cooper Jaguar T33 he is sharing with Derek Hood, making it three marvels of British engineering at the front of the grid. Former BTCC racer Patrick Watts lines up ninth in a Cooper Bristol T25.

For the second session in a row, Simon Hadfield left it late before soaring to the top of the timesheets, taking pole position in the Aston Martin DB4 GT. In so doing, he overhauled Jeremy and James Cottingham’s Jaguar E-type – which had long held the advantage – with Martin Hunt and Pat Blakeney-Edwards rounding out the top three in their AC Cobra.

Qualifying for FIA Masters Historic Formula One was a truncated affair, beginning behind the safety car and ending early due to a red flag following a number of spins. That didn’t stand in the way of a commanding display from Martin Stretton in his 1983 Tyrrell 012, winding up well clear of Sam Hancock in the 1978 Fittipaldi F5A and Steve Hartley, behind the wheel of a 1982 Arrows A4.

Matt Nicoll-Jones had to draw upon all of his wet-weather prowess in the glamorous Jaguar E-type to see off Jonathan Lewis’ Austin Mini Cooper S, with the powerboat racer enjoying something of a headstart in such conditions. Andrea Stortoni injected some Italian flair into proceedings, with a Mini that is British through-and-through to make it two Coopers inside the top three on the grid. BTCC legend Steve Soper placed sixth in another E-type.

Julian Bronson’s Scarab Offenhauser was the car to beat, with Will Nuthall’s Cooper T53, Sam Wilson’s LDS 7 and Tim Harvey – making his debut in the Cooper T51 and impressively hauling himself immediately onto the leading pace – pushing the pole-sitter closest.

Rob Huff stole the limelight by piloting the Lola T70 Mk3B he is sharing with Richard Meins to the top spot on the starting grid, notwithstanding a brace of red flags and an early finish to the session. The former FIA World Touring Car Champion saw off Martin O’Connell and Andrew Kirkaldy in their Chevron B19, with Martin Stretton and Grant Tromans completing the top three. Other big names in the field include Steve Soper and Marino Franchitti, who will start alongside one another in 13th and 14th respectively.

Round-up of other classes

Qualifying for the remaining classes – the Super Touring Car Trophy, Group C, International Trophy for Classic GT Cars (Pre ’66) and HSCC Guards Trophy – was disrupted by the heaviest rainfall of the day in sodden conditions. The decision was taken to allow competitors to run behind the safety car to enable them to benefit from some track time ahead of the races, although grids will be established based upon known previous performance.

Super Touring in particular has all the hallmarks of a bahnstormer, with the likes of Tim Harvey, John Cleland, Steve Soper and Patrick Watts all revved-up to renew battle and reignite some old rivalries alongside current BTCC race-winner Adam Morgan.

And now with a sunny day in prospect on Saturday and non-stop action from dawn ‘til dusk, everybody – from the drivers to spectators, marshals and event organisers – is ready to go racing!