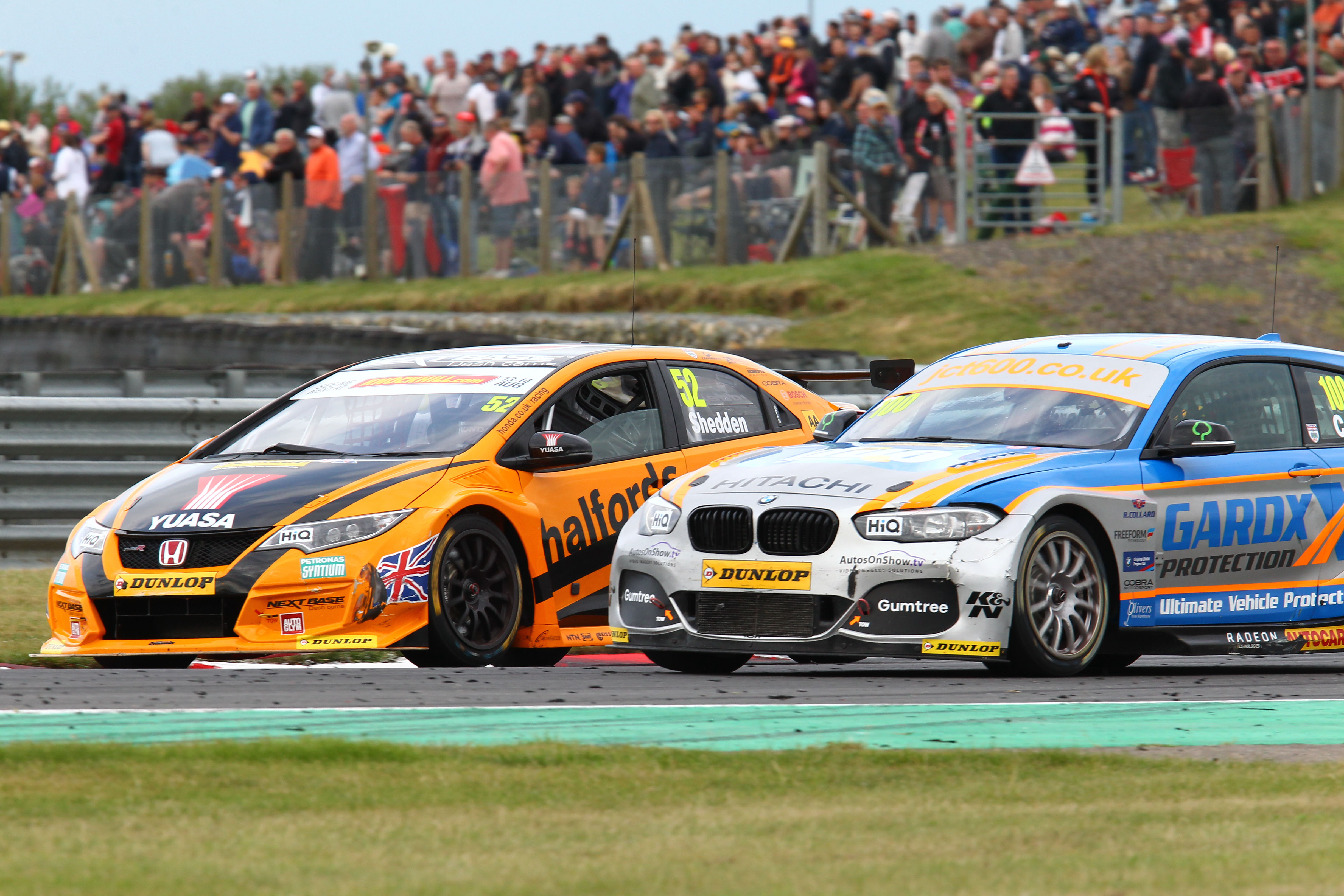 Halfords Yuasa Racing’s Shedden had already secured Honda’s first pole position in more than three years during qualifying at the Norfolk circuit, but a race one win failed to materialise for the Scotsman.

Turkington won the opener after the Silverline Subaru BMR Racing driver eventually got the better of Shedden during a near race-long duel.

It was bumper-to-bumper action for the first half of the contest, but Turkington finally muscled his way past on lap eight of 12. Shedden couldn’t respond and Turkington went on to become the first three-time race winner of 2016.

Mat Jackson made the best start of the leading contenders as he blasted his Motorbase Performance Ford Focus from fifth on the grid to third off the line. While Jackson kept the lead duo honest, throughout, he also had to hold off the challenge from Adam Morgan behind. Jackson did the job, claiming a podium on the team’s 300th BTCC race.

Jackson then secured victory in a thrilling, truncated race two, with Turkington and Matt Neal completing the podium positions.

The Focus fired off the line beyond second-placed Shedden and then past pole man Turkington, before a multi-car collision sparked drama down the order. Aron Smith and Kelvin Fletcher had a coming together on the exit of turn one, but the major incident came later in the lap when Dan Welch and Ollie Jackson tangled as they ran on to the Bentley Straight. With dust filling the air the unsighted Alex Martin, Hunter Abbott and Ashley Sutton were all caught up in the accident. Stationary cars littered the track, several with heavy damage, leaving race officials with no choice but to stop the race.

Take two and Jackson produced an almost carbon copy of his earlier effort – leading Shedden off the line but waiting until Hamilton corner before disposing of Turkington. Jackson remained untroubled for the remainder of the shortened ten lap race, with Turkington following up his race one win with another solid showing in the second bout.

The fight for the final podium place remained undecided until the closing moments, as Neal and Rob Collard provided a spectacle of superb racing. Collard looked to have made a move stick after both cars ran side-by-side for much of lap eight, but triple champion Neal immediately fought back to retake the position. The striking Halfords-backed Honda held on to reach the rostrum, but both drivers strengthened their respective championship challenges with stellar points finishes.

Shedden then completed a sensational day of entertainment by snatching an unlikely last lap victory in the final race on the Snetterton 300 layout.

A dramatic accident brought about the second red flag of the day when contact between Mark Howard, Martin, Jackson and Abbott sent the latter’s Chevrolet Cruze into a barrel roll. Abbott’s Power Maxed Racing machine spiralled over the barrier and into a television gantry, leaving a cameraman and several drivers shaken but thankfully unharmed.

Pole-sitter and then championship leader Sam Tordoff broke down before the race could restart as the BTCC threw up yet another twist to the title race. The relentless drama was far from over, however, as Jason Plato chased his first win of the season.

Collard muscled his way past the two-time champion on lap two before Jackson and Shedden followed suit one tour later. Third became second for Shedden when Jackson’s Ford slowed with a problem on the Bentley Straight.

The Honda Civic Type R began reeling in Collard at a rate of knots and was right on his tail coming into the final lap. Shedden fired the #52 machine down the inside of the Team JCT600 with GardX BMW and the duo ran side-by-side for what seemed like an eternity. Collard eventually had to give up the challenge and settle for second, as Shedden stormed to an outstanding victory.

Handy Motorsport’s Rob Austin claimed a popular podium as he fended off Plato, Andrew Jordan and Turkington at the chequered flag.

Colin Turkington said: “That win was one of my most memorable races. I’ve never won around here in a rear-wheel drive car so it’s great. My pace was much better than I expected, I just tried to be patient and I made the move when the opportunity came up. I was in two minds; do I let him go on up the road a bit and take the pressure off myself from the Ford behind? He went wide and I forced my way through on the switchback. I won’t give up on the championship – if we can keep the momentum going then there’s every chance.”

Mat Jackson said: “It was good. To do it for a second time after the restart makes it even better – the car was on fire. I have to say it’s been absolutely awesome. Colin knew my tricks second time around but it was terrific to take the win with all the ballast on. It’s great for us and all of our sponsors. We were on the softs so we were mindful of being there at the end, managing it to a point. It was just about keeping an eye on where Colin was and keeping him at bay.”

Gordon Shedden said: “Five laps from home, it wasn’t happening. Three laps from home it wasn’t happening, but somehow we made it. What a race for us and what a move. I braked really nice and late into the hairpin and normally that’s more of a BMW move but we made it work. We were both slipping and sliding in there but I got up the inside. I’m delighted to get the result, it was a stunning one for the team and myself.”

Matt Neal said: “It’s a good job I’m not a betting man because I’d have put money on Rob Collard taking the race two podium with three laps to go. To start with I got my head down and was trying to be as aggressive as I could, looking forward to Colin Turkington. I saw Rob’s BMW in the mirrors and my attentions had to turn from attacking to defending because he was flying. He was charging but the Type R held on!”

Rob Collard said: “After qualifying yesterday I wasn’t expecting anything. Race one didn’t go to plan either and I thought the day was over. To come back from that and be leading the championship is just absolutely amazing. Congratulations to my team, they keep driving me on and back me. I’m here to please the crowd too and us guys are nothing without them. What a crowd it was, so thanks to all of them.”

Rob Austin said: “That was great. It’s the best result for Handy Motorsport, so it’s fantastic. Thanks to the fans and everyone at the team. You’re always concerned when Jason Plato is behind you! I started to lose the rear tyres but I was quicker in the right places under braking, so I knew it’d be hard from him to get past me. Fortunately he couldn’t get close enough and I held my own. It’s been a tough start to the year but we turned a corner at the test day.”
2016 Dunlop MSA British Touring Car Championship – Round 16 – Snetterton: