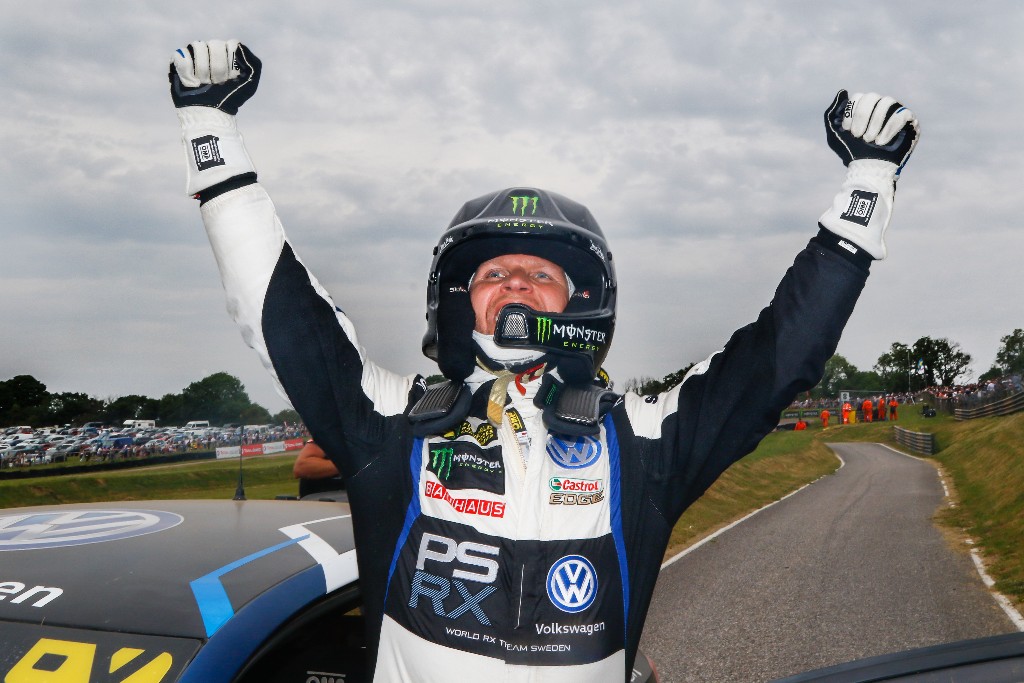 Norway’s Petter Solberg took an emphatic win at the wheel of his Volkswagen GTI Polo RX Supercar as the sport of rallycross celebrated its 50th birthday at Lydden Hill in Kent this weekend – round five of the FIA World Rallycross Championship presented by Monster Energy.  Solberg’s team-mate Johan Kristoffersson made it a one-two for PSRX Volkswagen Sweden, while Hoonigan Racing Division’s Andreas Bakkerud took the third podium spot in his Ford Focus RS RX Supercar.

Kristoffersson’s runner-up position this weekend has catapulted the Swede to the top of the drivers’ standings – four points ahead of Mattias Ekstrom who finished fourth in his Audi S1 EKS RX Quattro. Ekstrom, who suffered a puncture in today’s final, had the fastest reaction off the start awarding the reigning World RX Champion with the coveted Monster Energy Super Charge Award.  In the overall teams’ standings, PSRX Volkswagen Sweden continue to dominate – 69 points ahead of Team Peugeot-Hansen who remain second.

“This is the victory I needed,” beamed Solberg, who took his first win since Portugal 2016.   “The team have been flat out over the last couple of months – the car is good but it’s the little details that the team have been working on that has given us the consistency we need.  It’s been good team-work with Johan too – we give and take a little bit from each other and it’s been working very well. Now I’m looking forward to my home event in Norway – we have done some testing there and know the track well so this will help. It’s a very special place for us – we are a small country but with over 25,000 fans attending Hell RX the atmosphere is always fantastic. I have competed in motorsport for many years and things can happen very quickly – we must remain consistent and stay smart.  Regarding Lydden Hill, I have to say thank you – the atmosphere is always amazing and the volunteers have been great.”

New Championship leader Kristoffersson commended Solberg on his Lydden Hill victory. “Congratulations to Petter, he has been brilliant all weekend,” explained the 28-year-old Swede. “He has had the upper hand since the draw and managed his tyres very well. It’s all about the points now, I am now leading the Championship and the Teams’ Championship is looking very good too. My launches are now feeling better and the reaction times are getting faster every time – it’s been a good team effort. I’m really pleased with the weekend and this is the fourth Volkswagen podium in a row.  Now I’m leading the Championship for the first time on my own and it’s a great feeling – I will definitely be fighting hard to keep it that way!”

Third-placed Andreas Bakkerud added: “Huge congratulations to Petter and Johan – both have been quick from practice onwards and for me, this weekend was about being the best of the rest.  The whole team did a fantastic job – we tried our hardest but it was not quite fast enough. It’s just a small window of time before Hell, we have some developments to try so I must push that weekend and I hope that we can get back to the top.”

Rounding out the top five this weekend was Frenchman Sebastien Loeb – the Team Peugeot-Hansen driver fighting hard with Ekstrom for the majority of today’s final.  Timmy Hansen was sixth overall, the Swede slowed after spinning his Peugeot 208 WRX Supercar on North Bend and later losing time with a left-rear puncture.

Britain’s Andrew Jordan reached the final 12 but due to a bad start was unable to progress to the final.  He ended the event eighth overall, one spot behind America’s Ken Block who finished seventh.

Frenchman Cyril Raymond dominated the second round of the RX2 International Series presented by Cooper Tires winning all four qualifying sessions, the semi-final and the final. Raymond explained: “It was a perfect weekend for me and my second win of the year – big thanks to my team. Although, I had to admit this was not easy – I broke my rear suspension half-way through the final.”

Britain’s Dan Rooke finished runner-up in RX2 in front of a delighted home crowd, while Norway’s Thomas Holmen was third.

Paul Bellamy, World RX Managing Director for IMG, concluded: “Thousands of people attended Lydden Hill this weekend as we celebrated the 50th anniversary of our fantastic sport in the glorious sunshine. We’ve seen various retro rallycross machinery both on and off the track and it’s been an honour to have so many of the legendary names associated with the sport at Lydden Hill over the weekend including the likes of John Taylor – the first European champion from 1973.  As we approach the season’s half-way point, the World Championship title fight is heating up and it will be interesting to see if Johan [Kristoffersson] can hold onto his lead when the World Championship travels to Hell in Norway later this month.”