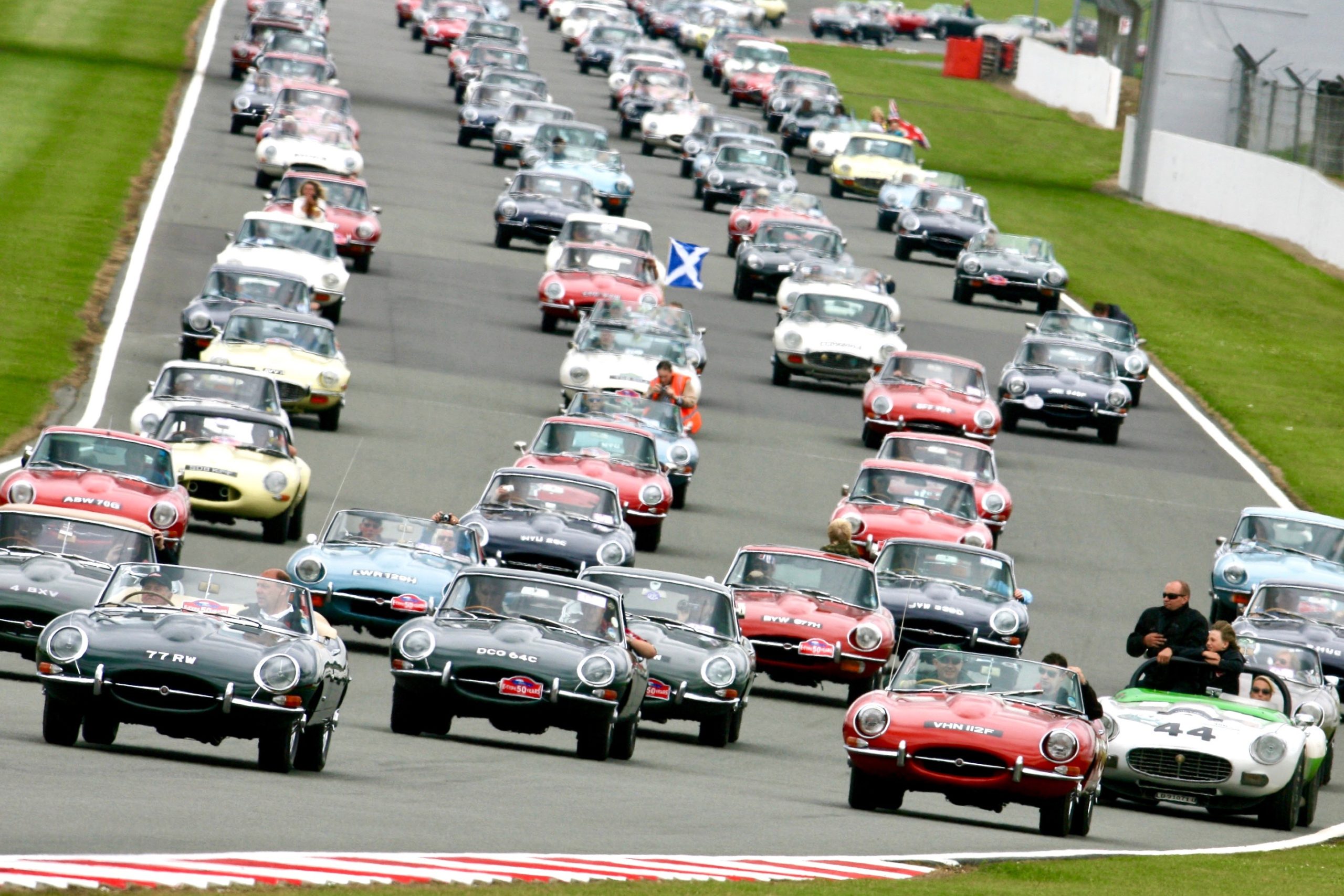 • Glittering birthday showcase for Jaguar’s fashion icon
• Display to star all 13 E-type supermodels at Silverstone
• First and last E-type roadsters join the ‘Hall of Fame’ spectacle
• Further celebrations to mark 50 years of the V12-powered Series 3
• Book now: tickets on sale at launch prices until the end of March

The immortal Jaguar E-type fashion icon celebrates its 60th birthday this year – a milestone that will be saluted in style at The Classic this summer (30 July – 1 August).

These will now be enhanced by a very special ‘Catwalk’ display spotlighting the evolution of Jaguar’s stunning supermodel plus a special birthday track parade for all E-type owners attending the world’s biggest historic motor racing festival.

Launched at the Geneva Motor Show in 1961 and immediately hailed by Enzo Ferrari as ‘the most beautiful car in the world’, the sports car pin-up became an instant trend-setter in the swinging sixties.

Its stunning looks and 150mph performance won the hearts of the rich and famous with Brigitte Bardot, George Best, Tony Curtis, George Harrison, Mick Jagger, Steve McQueen, Peter Sellers and Frank Sinatra all among its high-profile sporting and showbiz owners.

Over its 14-year production lifetime no fewer than 13 different models were introduced and exquisite examples of each and every single one of those will be glistening on the ‘Catwalk’ display at The Classic.

“Every supermodel deserves a catwalk!” extolled Nick Wigley, CEO of The Classic promoter Goose Live Events. “When it comes to British style icons the E-type is right up there and we are thrilled, once again, to be honouring another remarkable landmark in its wonderful history in such splendid style at The Classic.”

Organised by the ever-enthusiastic Jaguar E-type Club, the comprehensive ‘Catwalk’ will put the spotlight on both equally attractive fixed head coupe and convertible body styles, ranging from the early Series 1 trailblazers (powered by the Le Mans winning 3.8-litre, straight-six engine) right up to the final Series 3 evolution. Launched in 1971, the V12 hearted Series 3 is celebrating its own 50th birthday in 2021.

“The Jaguar E-type Club is delighted to be a part of the E-type 60th birthday celebrations at The Classic. We can’t imagine a better way to enjoy a summer’s weekend than by paying tribute to these game-changing icons in style. Club members are very much looking forward to sashaying on the Catwalk, exuding style in the track parade and spending time with fellow E-type and classic enthusiasts,” said Louise Gibbs the club’s General Manager.

Two further stand-out additions – kindly loaned by the Jaguar Daimler Heritage Trust – will add yet more sparkle and pertinence to the all-embracing ‘Catwalk’ showcase. The first is 77 RW, the oldest surviving open E-type and the car famously driven out to Geneva in a dramatic 17-hour overnight run by Norman Dewis, then Jaguar’s Test and Development Engineer. The second (HDU 555N) is the final E-type off the production line – the last of a special run of 50 cars carrying a commemorative plaque.

“The First and Last E-type Roadsters are normally on display in the Collection Centre at the British Motor Museum at Gaydon where we keep them both running and driving and use them wherever possible” explained Tony Merrygold, Vehicle Collection Manager at Jaguar Daimler Heritage Trust.  “We were planning to drive them both to Geneva for this year’s celebrations, but COVID got in the way so we and the cars are looking forward to an excellent weekend at Silverstone and spreading the love with a much wider audience.”

While the two dedicated E-type races and dazzling ‘Catwalk’ are certain to be showstoppers this summer, E-type owners are also offered the chance to join in the diamond anniversary festivities with a Saturday evening track parade plus the opportunity to win an enticing prize.

Although, with track time at a premium, this summer’s parade will not be on the same scale as in 2011 when no fewer than 767 E-types took to the Silverstone circuit to set a Guinness World Record, a significant turn-out is welcomed.

Indeed, to encourage owners to participate, all those exhibiting E-types at The Classic will be entered into a prize draw to win one of Agora Models’ amazing E-type kits. Aimed at model building hobbyists, these exquisitely detailed, museum-quality delights are dispatched in self-build segments over 12 months with a retail value of £1,150.

Whether owners or admirers, all those keen to acclaim the E-type’s 60th birthday bash at The Classic have just a few days remaining to take full advantage of the attractive launch ticket prices.

For those buying before the end of March, adult general admission starts from £39 with the price of a three-day weekend ticket just £105 with display packages for car club members also available. Free admission is offered to accompanied children aged 10 and under, while day tickets for those aged between 11 and 15 are priced from just £6. From the start of April a revised set of pricing will apply but, for the early bookers securing tickets before the 31 March, savings of up to 18 per cent are still on offer.

As ever, all tickets will give access to both racing paddocks, open trackside grandstand seating, live music concerts on Friday and Saturday evenings and much of the fabulous family entertainment on offer including funfair rides, driving experiences and stunt shows.

Ticket-buyers can also book with confidence with tickets carrying a COVID booking guarantee which means that if a change in current Government guidelines prevents spectators attending, all ticket-buyers will have the option to either transfer their ticket to the following year or receive a full refund.