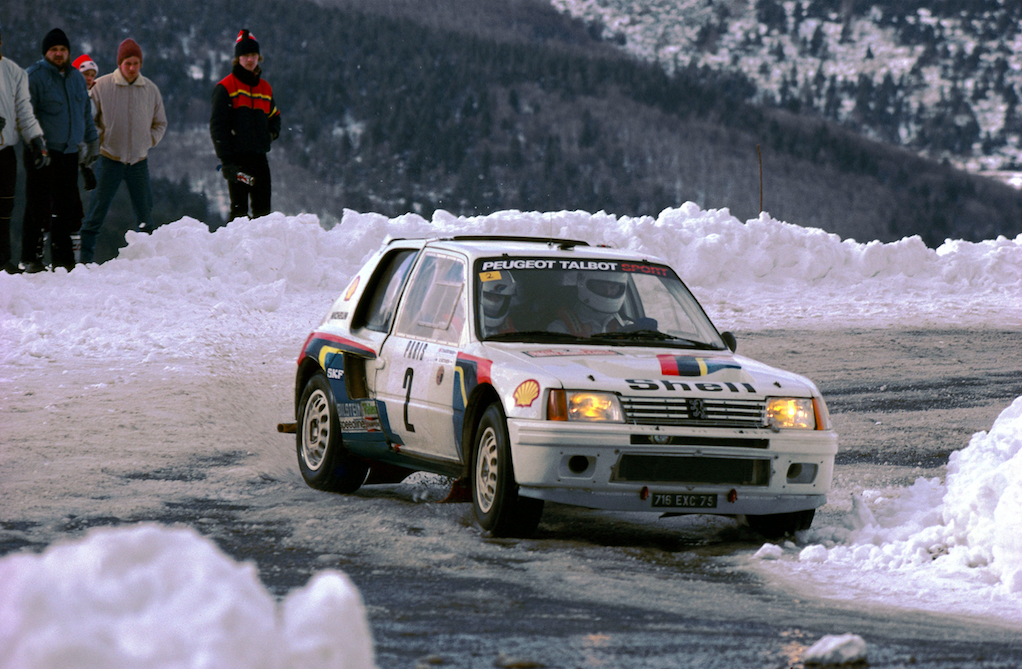 Thirty years since the fearsome Group B era was outlawed, the London Classic Car Show marks that milestone with a stunning display of epic cars presented by rally legend Ari Vatanen
Supercars between the trees. That’s what Group B was to rallying. Formula 1 in the forests.

In four years between 1983 and 1986 rallying developed further and faster than it had done in four decades before that. Group B took the sport to the absolute edge of performance, but put it beyond common sense. When FISA culled the category following a series of scary accidents, Group B was immortalised.

Though ultimately short-lived, since then the epic Group B era has acquired legendary status and will be evoked with a special display at next month’s London Classic Car Show (18-21 February).

The decision to axe the formula came almost exactly 30 years ago in May 1986. And yet the iconic collection of extreme Group B machines gathered at ExCeL still look current, futuristic even.

The cars include Lancia’s rear-drive 037 and the subsequent Delta S4, the Ford RS200 with its supercar styling, the Williams F1 engineered Metro 6R4, the punchy Peugeot 205 T16 and, of course, the trail-blazing Audi quattro that really set the ball rolling back in 1981.

Indeed one number, one word changed everything. Quattro. Four.

There were still those who refused to believe in the revolution, the combination of four-wheel drive and turbocharging would never work: too complicated and too heavy.

Six stages into the quattro’s World Rally Championship debut in Monte Carlo, though, Hannu Mikkola was almost six minutes ahead. The revolution had arrived. Rallying would never be the same again.

If Audi changed the game, it was Peugeot that defined the era. The quattro was good, but the 205 utilised the full freedom of Group B regulations. Beyond its 205 GTI silhouette, the rally car bore no resemblance to the road car. The turbocharged engine was mid-mounted and, of course, coupled to four-wheel drive transmission.

This was Ari Vatanen’s car and Ari will be one of the famous faces attending the London Classic Car Show. The Finn was one of the few men in the world who could contain the fearsome power of a Group B car and muster the controlled aggression required to get the best out of it.

For five rallies spanning the 1984 and 1985 seasons, Vatanen and the Peugeot 205 were unbeaten and utterly unbeatable.

“I was intrigued by this new car they were making,” he recalls. “And I was not disappointed. It was incredible. Remember, at the time, Peugeot was not really so well known in world of rallying. They had success in the long-distance African events, but nothing like a 205. When I sat at the start of the stage in a T16, I could always feel the side of my mouth making a smile.”

Group B was getting out of hand, however. Speeds were getting higher and higher and the death toll among fans and crews was rising. Vatanen himself almost lost his life in a terrifying crash in Argentina, 1985 – but that was more to do with the seat breaking mid-accident rather than the car around him.

By the end of 1986, Group B was gone. The cars, the Lancias and Audis; Austin Rover’s MG Metro 6R4 and Ford’s RS200 all of which will be on display in London became space-age museum pieces overnight.

Peugeot broke its 205 out of the museum and took it to America for the Pikes Peak hillclimb. Most famously, clothed as a 405, it helped Vatanen break the record for the 12-mile race to the Colorado sky in 1988.

The 405 T16 GR is a car Vatanen will never forget. “This was the diamond,” he says, “and like all unique jewellery, it only came out on special occasions!”

And the London Classic Car Show is one such occasion. An occasion made even more special with the news that Vatanen himself will attend the Premium Preview Evening on Thursday 18 February.

“I have such good memories of Britain,” admits the Scandinavian star. “I lived there at the start of my career and I always enjoy going back – it’s fantastic to meet such enthusiastic fans and it will be a nice opportunity to look back at some of our sport’s greatest cars.”

• Tickets for the London Classic Car Show are on sale now and start at £23 (including booking fee) for single adult entry on Friday, Saturday or Sunday and rise to £65 for entry to Thursday’s Premium Preview Evening. This includes fast track entry, the best views of The Grand Avenue at the Turning Circle Viewing Platform, access to the exclusive Premium Lounge, a Show Handbook and even a glass of Joseph Perrier Champagne.

To keep up-to-date with all the news from the London Classic Car Show visit the dedicated website – www.thelondonclassiccarshow.co.uk – or go to the show’s interactive Facebook page. Just search ‘London Classic Car Show’ from your own page and 2016 show news and 2015 highlights are there to be enjoyed.