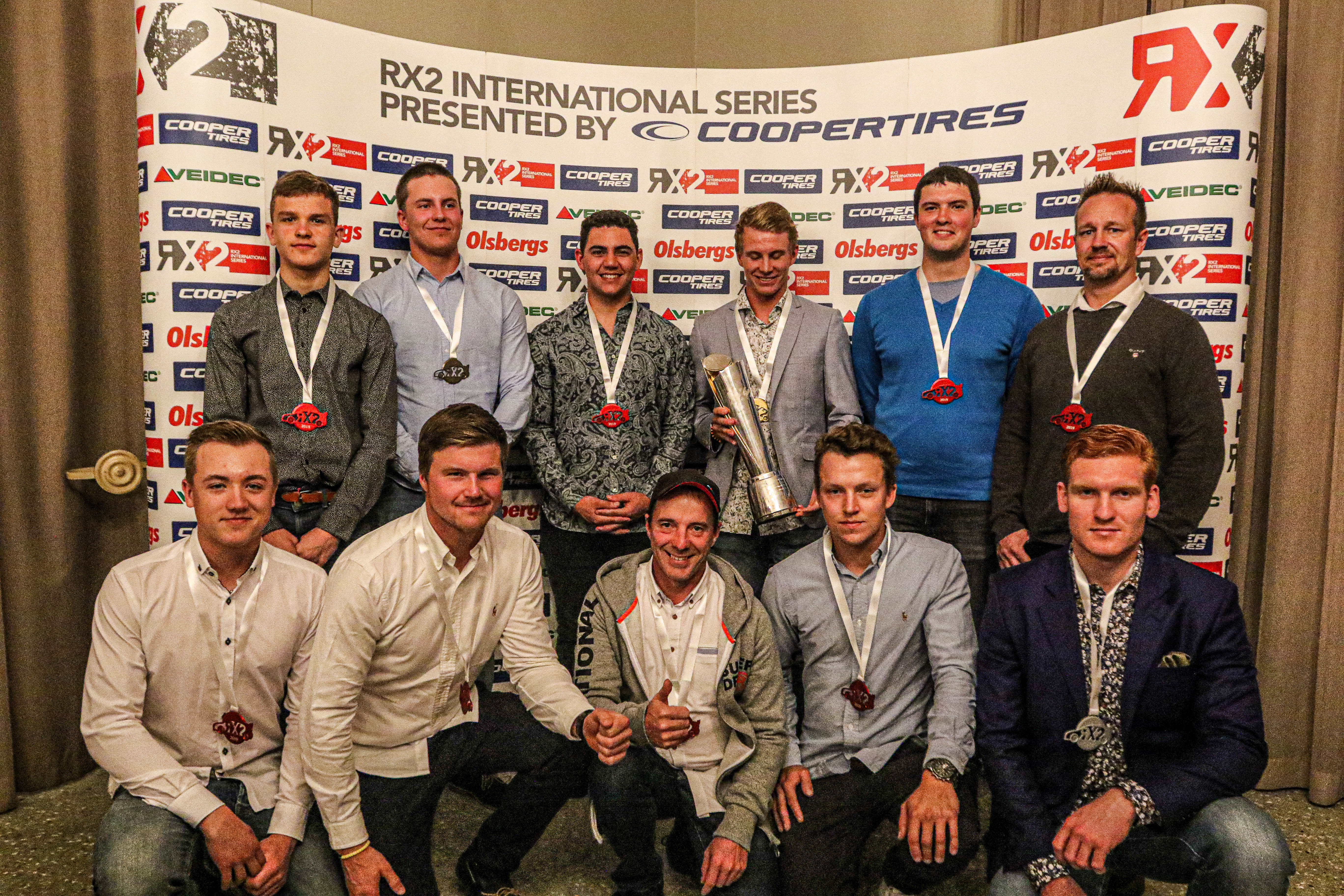 The highlights and high-achievers of the 2019 RX2 International Series presented by Cooper Tires have been celebrated in fitting fashion at the series’ annual Awards Gala, as the champion was officially crowned and others honoured for the part they played in another spectacular season of high-octane action.

As in 2018, the destiny of the laurels in the official FIA World Rallycross Championship feeder series went down to the wire last weekend at Cape Town’s Killarney International Raceway, where reigning champion Oliver Eriksson successfully completed his title defence with a fifth victory of the year.

Ben-Philip Gundersen – the only driver to defeat Eriksson in a straight fight in 2019 – posted back-to-back triumphs at Höljes and Lohéac en route to the runner-up spoils. Eriksson’s rookie team-mate Jesse Kallio, meanwhile, tallied five podium finishes on his way to an impressive third place in the overall standings, in so doing helping to secure the coveted Avitas Motorsport Team of the Year trophy for Olsbergs MSE.

All three men are undoubtedly stars of the future on the World Championship stage, and they were joined at Cassia, Nitida Wine Farm by Fraser McConnell, Sami-Matti Trogen, Vasiliy Gryazin, Simon Olofsson, Anders Michalak, Steve Volders, Linus Östlund and Niklas Aneklev – each of whom similarly enjoyed their moments in the spotlight over the course of what was another hard-fought campaign.

The evening’s most eagerly-anticipated element was the presentation of a number of special accolades designed to recognise the series’ most noteworthy performers. OMSE ace McConnell won the Cooper Tires Fans’ Favourite Award, the result of which was decided via a Facebook video vote. The Jamaican’s prize is a set of tyres to be used in RX2 in 2020.

Champion Eriksson received the P1 Fuels RX2 Ambassador of the Year Award and a 54-litre fuel drum for his role in positively promoting the series both on and off-track, while the IMG RX2 Unsung Hero Award was presented to Eric Färén, who picked up a pair of VIP hospitality passes to an event of his choice on the 2020 FIA World RX calendar for his tireless work behind-the-scenes.

The Swede also took time to talk about the new #YellowSquad RX2 outfit that will join the grid next year, drawing upon the experience and expertise of newly-crowned World Champion Timmy Hansen and younger brother Kevin Hansen, who will partner Färén in the running of the team.

Arguably the loudest cheer, though, was reserved for the recipient of the ‘Spirit of RX2’ Award, as an emotional and visibly surprised Maria Eriksson was welcomed onto the stage by event compere, FIA World RX television reporter Neil Cole. That set the scene for an evening of dining, drinking and dancing, as the RX2 family let down its collective hair and partied into the night.

“What a way to celebrate our third season!” enthused Series CEO, Andreas Eriksson. “I am immensely proud of how RX2 has established itself over the past three years as the leading support series to World RX and forged such an excellent reputation on the international stage through exceptionally entertaining on-track battles and the highest levels of professionalism in the paddock.

“Last week, we welcomed a new name into the fold in the shape of the Hansen brothers’ #YellowSquad, which is another endorsement of RX2’s ever-growing profile and popularity. Kevin Hansen is a former RX Lites champion who understands and appreciates the importance of what we are doing here, and we are delighted to have him and Timmy on-board.

“RX2 is very much a family, and whilst everybody is a fierce competitor on the circuit, off-track, the mutual respect and inclusive environment we have worked so hard to foster is I think a crucial factor in our drivers’ development. That is ultimately the key to this series’ ongoing success – and every indication is that 2020 is going to be our biggest and best season yet.”