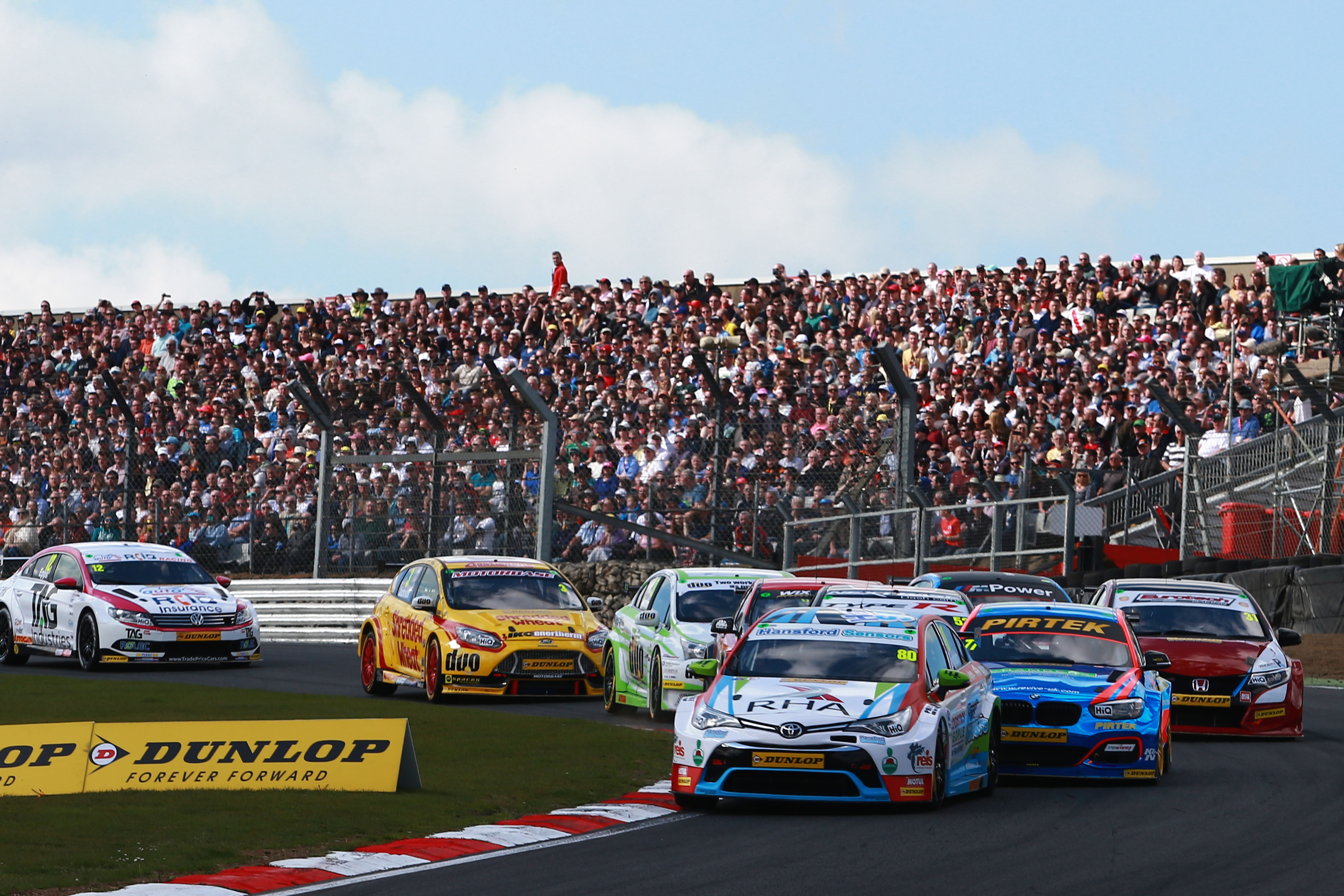 Jeff Smith had secured the first pole position of the new campaign during mixed conditions on Saturday, but the experienced Eurotech Racing driver couldn’t hang on at the front once the lights went out for Sunday’s season-opener.

Fellow front row starter Ingram secured his move for the lead before the cars had even roared into Paddock Hill Bend for the first time, gliding his Speedworks Motorsport Toyota Avensis around the outside of Smith’s Honda Civic Type R, whilst contact behind took two of the championship’s big guns out of the running.

Matt Neal tried to defend against the charging rear-wheel drive BMW of Colin Turkington off the line, but unfortunate contact was made as the Honda moved across the track. Both cars stuttered into retirement with damage, bringing about the first safety car period of the new season.

Smith was immediately forced into full defensive mode when the race restarted, but he couldn’t keep Shedden’s Honda behind. The reigning champion made a superb move into Graham Hill Bend on lap six, whilst Adam Morgan eyed his opportunity to follow suit.

This left a top three of Ingram, Shedden and Morgan, an order that would remain unchanged until the chequered flag. It was an extremely good drive from race-winner Ingram, the 23-year-old repeating his 2016 performance with victory in the opening race of the season.

An aborted start due to a problem for pole-sitter Ingram was followed by an accident at the restart, as Jason Plato’s Subaru Levorg was turned into the pit wall off the line. Heavy contact left the double champion’s Japanese machine stricken on-track in a dangerous position, obliging officials to red flag the contest.

Eventually it was lights-out for a reduced 23-lap race, as Ingram initially led the way from Shedden’s Honda. The ballast-laden Toyota Avensis couldn’t hang on however, as the Scot slipped by at Paddock Hill Bend on the second tour.

Shedden looked assured at the head of the pack, and his place was further cemented as Rob Collard hauled his BMW 125i M Sport onto the rear of Ingram’s Toyota. The experienced Collard nudged Ingram through Paddock Hill on lap 20 and eventually made the move stick on the run downhill. There was little time for him to make inroads into Shedden’s advantage, however, and the Honda man comfortably secured his first win of 2017.

Jordan completed a dream debut for BMW by claiming a victory in the final race on the 1.27-mile Indy circuit.

The 27-year-old – who switched from Ford to BMW machinery during the off-season – held off a late attack from West Surrey Racing stablemate Turkington. The pair touched briefly during the final lap, but Jordan held on to clinch an historic win for the returning manufacturer.

Tom Chilton made it a memorable podium as Vauxhall marked its own BTCC comeback with a fine third place for Power Maxed Racing.

BMW Pirtek Racing’s Jordan blasted from third on the grid to lead the field into Paddock Hill Bend on lap one, whilst Mat Jackson faced heartache trying to follow suit. Jackson’s Team Shredded Wheat Racing with Duo Ford went around the outside of Chilton’s Vauxhall Astra, but the former ran out of road after slight contact and endured a trip across the gravel.

Chilton maintained second while fellow front row starter Josh Cook was being shuffled down the order in the Team Parker with Maximum Motorsport Ford Focus.

Team BMW’s Turkington had jumped from tenth to third by a little over mid-distance and he busily closed in on Chilton’s PMR Astra ahead of him. The series returnee had no answer – deciding discretion was the better part of valour – and he allowed the Northern Irishman to nip by on lap 17.

Far from settling for second, Turkington reeled in Jordan at a rate of knots, and was on the blue Pirtek machine’s tail for the final few laps. He tried everything he could to get by – including a friendly rub through Clearways – but 2013 champion Jordan held firm to lead home a fantastic one-two for BMW.

Neal took fourth from Morgan, with both finishing ahead of the fading Collard, whilst Shedden had to settle for seventh – cementing an extremely positive day for the reigning champion.

Other standout results included a fifth-place finish for Rob Austin in race one, although his day rather unravelled following exclusion from the second contest due to contact made with Jordan and completing an overtaking manoeuvre under yellow flag conditions.

As the dust settled on an exciting opening weekend of the 2017 season, triple champ Shedden leads the standings by just six points from Ingram, with Jordan a further point in arrears.

Morgan is fourth after a trio of top five finishes, with Collard just behind following his own good run of results. Morgan and his Ciceley Motorsport squad also lead the Independents Drivers’ and Teams’ order.

Tom Ingram said: “That was absolutely fantastic, how do you put it into words? Winning here two years on the bounce – it’s the best way to repay all that hard work over the winter. It’s a heck of a result and I’m really pleased. Everyone was reminding me for the next race, ‘get points – just get points’. As soon as I saw Rob [Collard] throw his nose down the inside at Paddock in race two, I thought, ‘I remember this from last year!’ We prioritsed the points and considering the weight we were carrying, third was a great return.”

Gordon Shedden said: “I’ll take those three results any weekend of the year – it’s been a brilliant start to the season. The Civic Type R felt great throughout. In fact, it was even better with the weight in race two than without it in race one, which was slightly random – but very encouraging going forward. I think this must be my best ever start to a BTCC campaign, so we’re clearly going in the right direction. I’m absolutely chuffed – a very happy Scotsman heading back north tonight!”

Andrew Jordan said: “That was quite a start wasn’t it with rear-wheel drive and a new team? I was getting a bit twitchy with Colin (Turkington) looking really, really strong on the soft tyres behind – the rear-wheel drive expert! We had a little rub at the end there but it was a good way to end. I knew he wasn’t going to do anything silly. It’s really special, to get the win on my first event with BMW Pirtek Racing and West Surrey Racing. It’s down to the team – credit to the guys for all the work they’ve put in.”

Adam Morgan said: “To get on the podium in race one was incredible. A third, fourth and fifth was more than we expected and to be leading the Independents’ is magnificent. Consistency is going to win the championship this year. We need to keep those points ticking over and we’ll be near the front come the end of the season. The car was extremely quick in the first race and I think we’re in for a good shout. We aim to be in overall title contention this year although the Independents’ is our main target.”

Rob Collard said: “I was so relieved that the second race was red-flagged early on, because [Rob] Austin had tipped me into a spin at Druids and I was nowhere – virtually last. A good re-start was crucial for me, and after that we picked them off one by one. Andrew [Jordan] worked well with me when it was clear that I was quicker, and to get Tom [Ingram] at the end was brilliant. The BMW felt amazing throughout.”

Colin Turkington said: “It’s so easy to let the head drop at the start of the day when you make 12 yards off the line and end up facing the traffic, but I’ve been around in this championship for so long that I know you’ve just got to look to the next race. Race two was where all the hard work was done really, carving through from the back and giving myself a chance with a good slot on the grid for race three. The guys gave me a great car in the BMW for the last one. We tweaked it for the soft tyre and I couldn’t believe the pace.”

Tom Chilton said: “It was perfect. It’s our first event of the year and we’re still learning the car. It shows what a great job Power Maxed Racing has done and to get a podium is brilliant. It’s put me right up there in the championship in a new car – it’s amazing. I didn’t expect it at all. The BTCC has 32 of the best drivers in Britain and some of the best teams in the world, so to get a result is very difficult – especially a podium, so I’m absolutely over the moon. It was quite special and for us, it felt like a win.”