STARS OF THE SCREEN STEAL THE SHOW IN CLASSIC CELEBRITY CHALLENGE 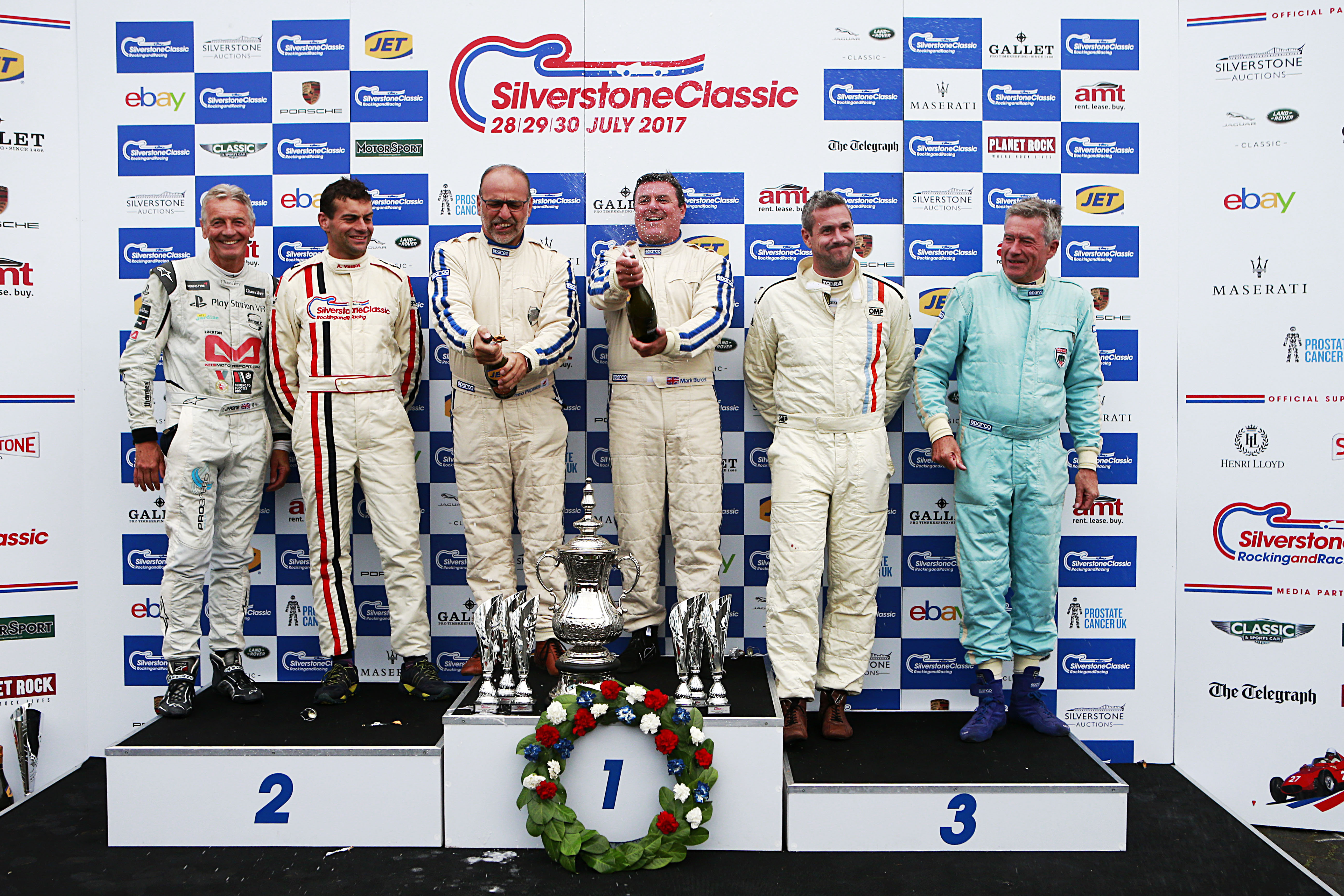 Their victory did not come easy, however, with the race staged in increasingly difficult conditions as early evening drizzle turned into rain to leave grip at a premium on the famous 3.6-mile Silverstone Grand Prix circuit – a particular challenge for many of the celebrity rookies making their track racing debut in the star-studded encounter.

To add to the spectacle, all 26 entrants were behind the wheel of equally-matched Austin A30s and A35s kindly provided by members of the HRDC (Historic Racing Drivers’ Club) Academy, who have their own race today (Sunday).

Following a short familiarisation and afternoon qualifying session held under sunny skies, the rain began to fall as the cars took to the track for the early evening race, with a brief red flag intermission and safety car re-start adding to the drama.

In such tricky conditions, it was no surprise that the experienced team captains came to the fore, as Blundell, fellow ex-grand prix driver Martin Donnelly and touring car legends Steve Soper and Anthony Reid diced furiously at the front, exchanging positions with brio.

In a four-car slipstreaming thriller, it was Soper that prevailed, with a last lap spin for Reid elevating Donnelly to second and Blundell to third. Former Motorcycling 500cc World Champion Wayne Gardner came home ‘best-of-the-rest’ in fourth, with Jason Kenny CBE – Britain’s equal-most successful Olympic athlete and a man with a modicum of prior motor racing experience – finishing a commendable ninth.

Amongst those with hard luck stories to tell were former AC/DC front man Brian Johnson – who was unable to start the race after taking a tumble his car in qualifying – and all three Olympic gold medal rowers, with Jonny Searle MBE, Greg Searle MBE and Mark Hunter MBE all struggling to conquer the treacherous conditions. Thankfully, everybody emerged unscathed.

“Our first Silverstone Classic Celebrity Challenge Trophy Race proved to be a superb addition to the bill this year,” enthused Event Director Nick Wigley, who participated in the race himself as a team captain, taking the chequered flag tenth. “Considering the distinctly inclement weather, I think everybody did really well – most notably the complete rookies in the field who had never done anything like this before.

“It was anything but a straightforward baptism for them, and I must congratulate Mark and the Screen Stars team on winning and helping to raise so much money for such a worthy cause. I also need to thank all the owners of the cars, who kindly entrusted us their pride and joy yesterday. We look forward to seeing them take to the track themselves today.”

Steve Soper (1st)
“That was very, very tricky. It was all about trying to find the grip, with different drivers finding it in different corners. It was huge fun – my heart was really pumping and the adrenaline was flowing. Everybody who finished did a fantastic job, so all credit to them. I know he was in my team, but for Wayne Gardner to finish fourth was incredible.”

Mark Blundell (3rd)
“That was great fun, but they were extremely difficult conditions. Out of all the races I’ve done, it was probably one of the most difficult because of the cars’ limited grip and the conditions. That made it impossible to predict. Just about everybody was sideways and for the rookies, I think, it was particularly hard work. Hats off to those that finished – they’re in good company!”

Wayne Gardner (4th)
“That was a challenge! They’re very difficult cars to drive – especially to drive fast – and to add to the difficulty, it rained. It took me a little while to understand where the grip was, and I really only got that on the last lap by studying the drivers ahead. I was getting faster and actually catching the leading group and then the chequered flag came out! Overall, I’m pretty happy. I didn’t spin, I made it home and I think if it had been dry, I could have been on the podium. It was great fun – I really enjoyed it.”

Jason Kenny (9th)
“That was brilliant! I got really nervous when it started raining, but that only made me enjoy it more. I just tried to keep all four wheels pointing in roughly the same direction. It was a great experience, especially given my position on the track just behind all the pros. I was trying to hang onto their coat-tails, which was really good fun.”

Howard Donald (12th)
“Once the weather changed, everything changed – it became very slippery! When I saw cars spinning in front of me, it made me happy as it wasn’t me! I would do it again. It was great to learn in one of these cars as, if you can race one of these, you can probably race anything – that’s my theory!”

Theo Paphitis (15th)
“Those were the worst conditions I have ever driven in. I made the mistake of wearing white pants; now they’re going to call me ‘Skiddy’ as there were a lot of skids going on in more ways than one! If someone asked me to do it again, I’d tell them to ‘get lost’ – but, as it happens, I’m doing it again on Sunday in the owners’ race.”

Carl Froch MBE (16th)
“To be honest, it was petrifying, but I’m really happy to have finished in 14th and moved up two places. After I saw the car in front of me go off, I decided to play it safe as these cars are not exactly forgiving, especially in these conditions.”

Amy Williams MBE (17th)
“I loved it! That was the most amazing experience and I’ve really enjoyed learning a whole new skill. As far as the race was concerned, I think I was the Sunday driver at the back! I saw too many others spin in front of me to push too hard, particularly as I’d spun myself in qualifying. I really wanted to bring my car – who I’ve named Humphrey – home in one piece, so I was thrilled to finish with both of us intact. I would really love to do it again; I want to get better, faster and just be a mega racing driver.”

Vassos Alexander (18th)
“That was the most fun you could probably have, certainly in the rain – just great from start-to-finish. Those are sweet little cars. They’re ridiculously difficult to drive – way outside my talent level, but I kind of enjoyed it for that. I must have spun a dozen times, but every time I had a big grin on my face. I loved every second, and we made a load of dough for charity, which is the main thing. People had a great time – fantastic. All-told, 360 degrees of win!”

Mike Wedderburn (19th)
“Yep, that was scary and then some, as I thought it would be. The conditions suddenly changing like that was terrifying and drivers were spinning everywhere around me, but overall, I was just relieved, proud – and a bit embarrassed – as I got lost in the pits. Absolutely delighted to finish the race with me and my car intact.”

Mark Hunter MBE (20th)
“It was epic, awesome – I loved it! Some rain in qualifying would have been useful. My accident in the race has not deterred me and I’d do this whole experience again – absolutely!”

Ant Anstead (DNF)
“I’m in the winning team – it’s just a shame I couldn’t have contributed to the points total. In fact, I probably hindered us by damaging the car! The accident was really strange. I’d overtaken three people and was feeling good. I was really ‘in the zone’, but the conditions suddenly went from grippy to ice-rink when the rain started. I had a few little wobbles but I corrected them, then I came into Copse with no-one near me and in the middle of the track. I started to go, tried to correct it and it just bit me. I cut my finger and I’ve got a bit of a bruise, but the worst injury is my pride. I’ll be sore tomorrow but what the hell, our team won! Would I do it again? 100 per cent.”

Orla Chennaoui (DNF)
“Wow! What a day… The whole experience has been amazing. I loved it so much, but it was so frustrating not to have completed the race. I really found my inner racer, and the thrill of overtaking was just incredible. I just got a bit too confident, but I would 100 per cent do it again in a heartbeat!”

Jonny Searle MBE (DNF)
“Well, everything we got taught sort of went out of the window – literally – once the rain came down. Prior to that, I was really getting into the racing spirit and with it came a healthy dose of competitive red mist! Maria [Costello] was in front of me and I went to overtake her, got excited and started to spin. I tried to correct and overdid it – and the next thing I knew I was rolling. The windscreen came out, which was fortunate as I couldn’t get out of my door! I feel bad that I broke the car but delighted to have taken part and, yes, I’d do it again. The whole experience makes you just want to get better at this whole thing!”