STARS OF THE SHOW HONOURED AT INAUGURAL RX2 AWARDS GALA 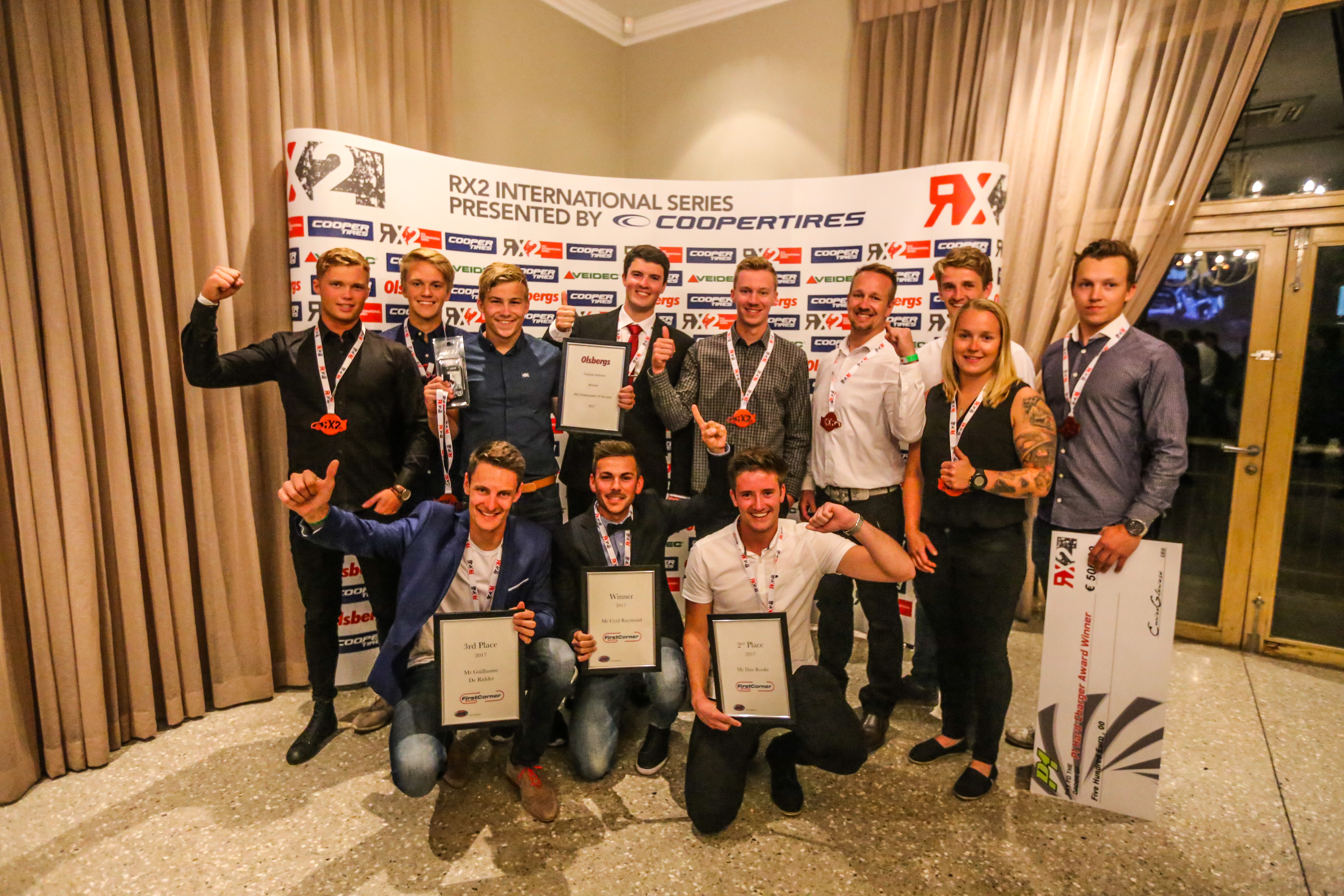 RX2’s inaugural season reached a fitting conclusion at Gumtree World RX of South Africa last weekend, with some spectacular racing in front of a hugely appreciative audience at Cape Town’s Killarney International Circuit, capped by a champion’s drive from Cyril Raymond (France), who crowned his title-winning campaign with a superb sixth victory.

Raymond, championship runner-up Dan Rooke (UK), third-placed finisher Guillaume De Ridder (Belgium) and many of the other drivers that have made RX2’s first season such a resounding success were present at the Awards Gala to collect their prizes. They were joined by their teams, series partners and rallycross media for an evening that highlighted the very finest achievements of the year.

There were a number of special accolades designed to recognise the most noteworthy performers. De Ridder was a popular winner of the Cooper Tires Rallycross Rookie of the Year Award – for which he received four new 2018 Cooper race tyres – while Andreas Bäckman picked up the Performance Clothing Most-Improved Driver Award for his eye-catching progress this year after graduating directly from karting. The young Swede’s prize is a £500 credit to have his own branded kit produced by RX2’s official merchandise supplier.

Norwegian teenager Thomas Holmen was presented with the Olsbergs Electronics RX2 Ambassador of the Year Award – and an accompanying day of driving tuition alongside MJP Racing Team Austria Supercar ace Kevin Eriksson – for his commendable attitude and stellar efforts in promoting the series.

Fellow Scandinavian Simon Olofsson (Sweden) received the P1 Hard-Charger Award and a €500 credit at P1 Racewear for his refusal to give up and never-say-die approach even in the face of adversity, while the Avitas Motorsport Team of the Year trophy went to Team Färén, who impressively ran Rooke to second place in the final standings in their first full season of competition.

The IMG Spirit of RX2 Award – whose purpose is to recognise one of the series’ unsung heroes working hard behind-the-scenes – elicited perhaps the biggest cheer of the night as it was presented to Supercar Lites European Parts Co-ordinator Anton Therus, who won a pair of VIP hospitality passes to an event of his choice on the 2018 World RX calendar.

“After such a great first season for RX2, we wanted to do something to really celebrate the series’ achievements,” reflected RX2 International Series presented by Cooper Tires CEO, Andreas Eriksson. “So many people have worked so hard – both on the front line and behind-the-scenes – and they deserve to be rewarded for that.

“I have been delighted to see the way in which RX2 has grown over the course of the year, to the extent where we are now widely regarded as the most cost-effective, relevant and direct route to the pinnacle of the FIA World Rallycross Championship, which is ultimately where our drivers want to be.

“It has been immensely satisfying for me to watch them all progress and gain in both confidence and stature while proving their very obvious potential out on the track, and their successes are testament to the unwavering commitment of their teams, engineers, mechanics and sponsors. Each and every member of this series should give themselves a big pat on the back. 2017 has been an excellent year for RX2, and I am already excited for what 2018 will bring.”