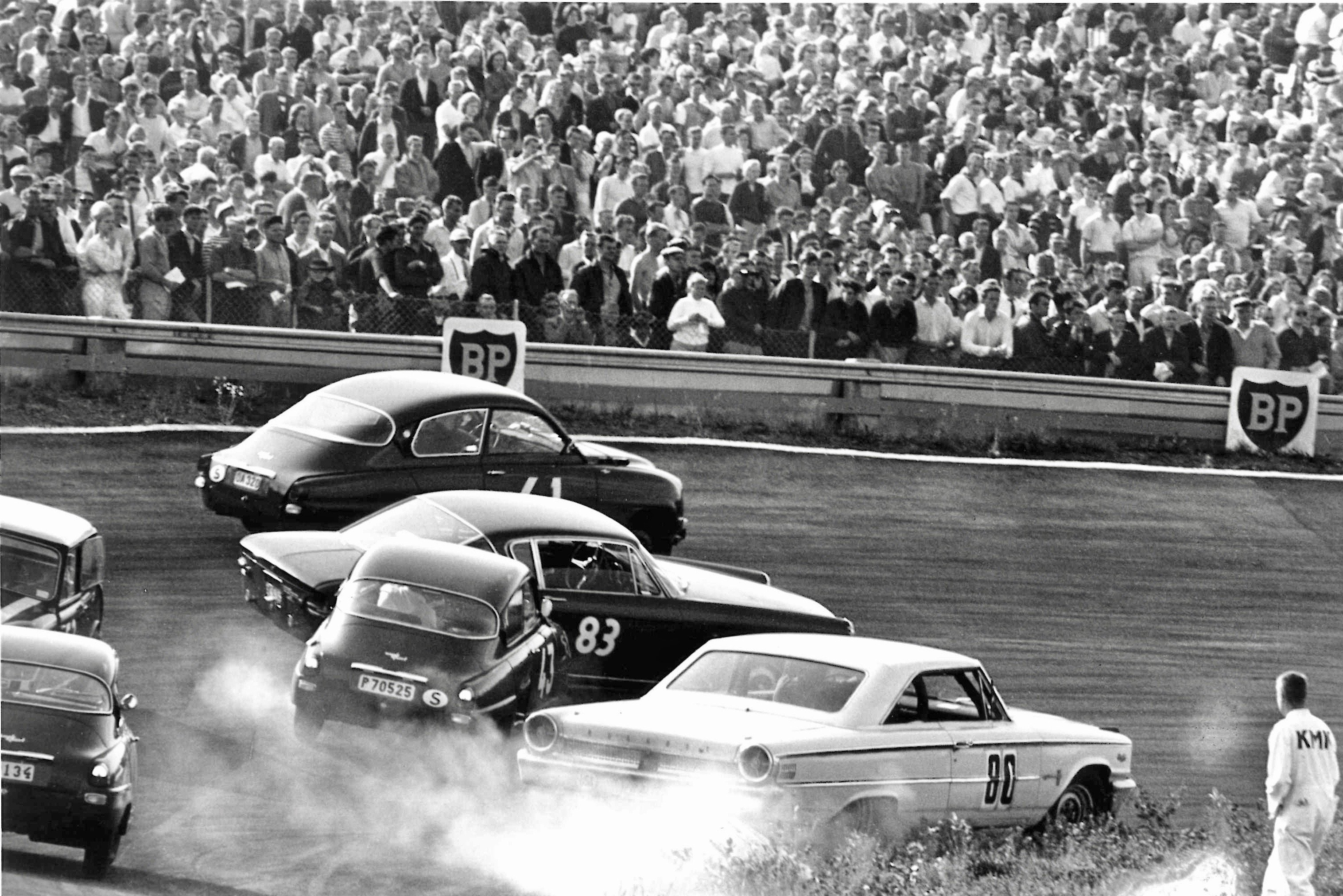 Back in 1964, a young Swede jumped on his moped and headed off to watch the sixth round of the European Touring Car Championship at his local Karlskoga racing circuit. Little did the impressionable teenager know it at the time but it would be a life-changing day and a moment that he would now be honouring 45 years later at this month’s Silverstone Classic (26-28 July). Here’s why…

At Karlskoga on 9 August in 1964, the boy became fascinated with a huge 7-litre Ford Galaxie being raced by Alan Mann. By all accounts Mann had only entered the massive American monster as a makeweight to ensure there were enough cars on the grid for his team’s two main entries – factory-supported Ford Cortinas being raced by John Whitmore and Henry Taylor – to score maximum points.

Whatever the reason, the youthful Swede had never seen a car quite like the Galaxie – it was so big yet still wieldy enough to finish on the podium on such a small twisty circuit behind the pair of title-chasing Alan Mann Racing run Lotus Cortinas. The sight of the mighty American beast hustling around the track really caught his youthful imagination and fuelled his motor sport ambitions (photos above and top below).

This eye-opening experience also sparked a lifelong love for Fords, which culminated in rally legend Stig Blomqvist – for he was that young boy – signing as a factory driver for the Blue Oval back in 1986, just two years after winning the World Rally Championship title with Audi.

Today, that ex-Alan Mann white Galaxie (photos middle below) is owned by gentleman racer and Ford V8 specialist businessman Bill Shepherd. And, thanks to a chance conversation on a frozen lake earlier this year, he’s invited Stig to race the very same car that had mesmerised the young Swede all those years ago in Saturday afternoon’s spectacular Transatlantic Trophy for Pre ’66 Touring Cars at the Classic.

Like his famous Top Gear TV star namesake, Stig is not usually a man of many words, preferring to let his driving do the talking. He does, though, get animated and his eyes light up when talking about the approaching reality of racing this very special Galaxie.

“It’s a very good story isn’t it, eh?” he grins. “Seeing that big car all those years ago really made a huge impression on me when I was young – it looked four times bigger than all the other Cortinas and two-stroke Saabs on the grid back then!

“I could never have dreamt that one day I’d be actually racing the very same car that first excited me at Karlskoga. It’s going to be an incredible personal moment for me and a lot of fun at Silverstone – I can’t wait.”

Shepherd, too, is excited about sharing his Galaxie with such a motor sport legend in the two-driver showdown at the Classic. He says: “I’ve bumped into Stig several times in the past at places like Goodwood but, until earlier this year, had absolutely no idea about the impact that my Galaxie had made on him as young man.

“Back in the Spring he invited me to go ice driving up in Sweden: one night we got talking and he came out with this amazing tale of how he’d fallen in love with a particular Galaxie as a teenager and how the sight of this car had not only inspired him to pursue a career in motor sport but also fired his lifelong love for Ford.

“Almost unbelievably I’ve actually owned that very same Galaxie for more than 20 years, so it only seemed right and proper to invite him to the Classic to race it with me. Teaming up with him will be very special. I’m sure he’ll be quick in the car… unless, of course, he reverts to character and goes rallycrossing off track!”

As had been the scene at Karlskoga back in 1964, the Transatlantic Trophy race at Silverstone will feature a David v Goliath grid with agile Lotus Cortinas, Minis and Alfas taking on American V8 muscle… though this time the Galaxie will not be alone. It will be joined by large numbers of Mustangs and Falcons on what is a sensational full-capacity 58-car grid.

Despite the quantity and quality of the competition, Shepherd believes the ‘dream team’ (photo bottom below) could just come up trumps. “If we do stick to the black stuff, we should be pretty competitive,” he predicts. “The Silverstone Grand Prix circuit is pretty fast which always suits the Galaxie with its big 7-litre V8 engine. Wouldn’t it be great if we could crown off what will already be an historic moment with a fantastic win. We’ll certainly be aiming for the fairy tale finish!”

It could, too, be a double celebration as Blomqvist will be popping the corks for his 73rd birthday on the Monday (29 July) immediately after the Classic.

The Transatlantic Trophy for Pre ’66 Touring Cars is just one of more than 20 remarkable retro races on the bill at the world’s biggest classic motor racing festival.

This summer’s unrivalled roster includes special anniversary celebrations for Bentleys, Capris and Minis plus evocative showdowns for classic era Formula 1, Formula 2 and Formula 3 single-seaters all together on the same race-card for the very first time. There’s also a sparkling Twilight Tribute to Le Mans as the sun goes down on Saturday evening.