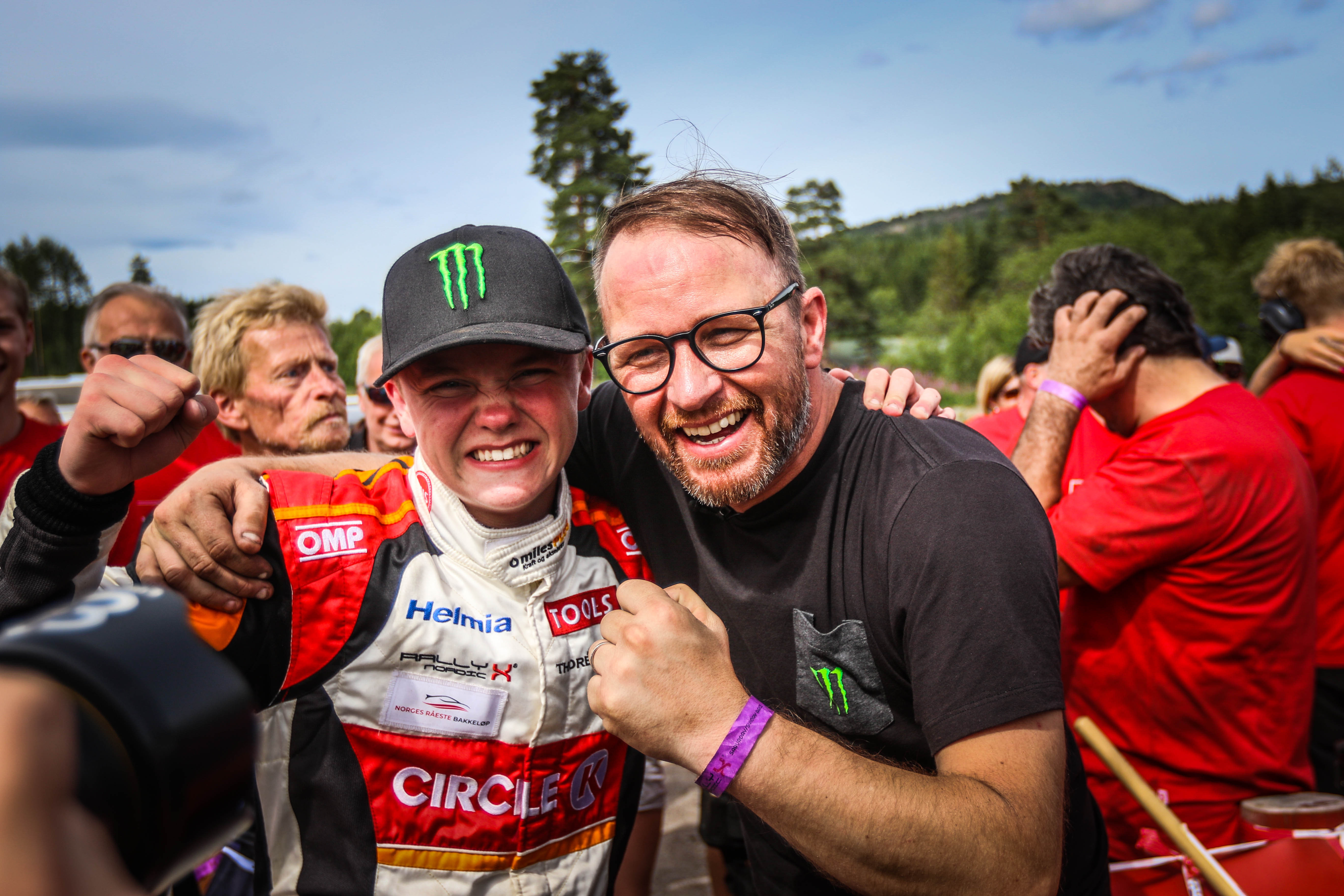 Oliver Solberg has moved into the lead of the RallyX Nordic championship standings after claiming dominant victory in Grenland, as title rival Thomas Bryntesson failed to progress to the finals.

The OSRX driver was in stunning form throughout the day, claiming comfortable wins in all three heats and his semi-final at the wheel of his Citroen DS3 before proving similarly untouchable come the final.

The fourth win of his burgeoning RallyX Nordic career, the ‘clean sweep’ marks another landmark achievement for the 16-year old as he heads into the summer break with a newly-established advantage in the standings too.

His newfound position comes at the expense of erstwhile leader Bryntesson, who endured a day to forget in the JC Raceteknik Ford Fiesta. Despite matching Solberg for pace in the qualifying heats. Bryntesson’s challenge was ended abruptly at the semi-final stage when the suspension on his car collapsed as he entered the joker, forcing him to park up and retire.

Bryntesson’s early exit, coupled to rival’s maximum points’ haul, lifts Solberg to the summit of the RallyX Nordic standings on 75 points, four ahead of Bryntesson.

Behind Solberg, Oliver Eriksson secured his first podium of the season in the Olsbergs MSE Ford Fiesta. The Swede recovered from a broken turbo early in the day to win his semi-final before proving the closest rival to Solberg in the final, Eriksson crossing the line two seconds shy of the top spot.

Completing the podium, Daniel Thoren produced a fine performance in the Hedstroms Motorsport Volkswagen Polo to cross the line in third position. The Swede was engaged in a race-long battle with the similarly impressive Andreas Carlsson for the final podium spot, Thoren eventually getting the better of his countryman as they both picked up season’s best results.

Looking to make up for Bryntesson’s disappointment, JC Raceteknik’s Ola Froshaug ran third only to break his Fiesta’s suspension coming into the opening bend on the final lap, the Norwegian slipping down to fifth position as a result.

Peter Hedstrom was eliminated from contention at the first corner after contact ricocheted him into the outside bank. It is the third event in a row the Swede has been involved in an incident in the final to scupper his hopes of a podium challenge.

Behind Solberg and Bryntesson, Eriksson rises to third in the standings – 15 points shy of the overall the lead – with Hedstrom and Froshaug completing the top five.

Oliver Solberg, OSRX, commented: “To win all of my races in such a dominant way is amazing! It certainly wasn’t easy, I was working really hard to ensure I had clean races but I drove at my best throughout. It’s especially exciting to win like this in Norway. There are a lot of fans and Norwegian people here, so it is fantastic to have such a perfect weekend in front of everyone. It is great for the championship too and I am thrilled to be leading the standings now. You can be certain we will come back from the summer break fighting and ready to push for the title!”

Ian Davies, RallyX Nordic Series Manager, said: “The Grenland circuit is one of RallyX Nordic’s most challenging venues but Oliver Solberg produced a masterclass that belied his youth in the way he approached each of his races. Nevertheless, he was still made to work hard for his success and the spectators were treated to some enthralling action in both the Supercar and Supercar Lites class. It has been a memorable first-half of the season and I am in no doubt there is plenty more excitement to come after the summer break. We look forward to more brilliant competition when RallyX Nordic resumes in Nysum, Denmark on 11-12 August.”

In Supercar Lites, Guillaume De Ridder notched up a hat-trick with his third victory of the season in the Olsbergs MSE entry. For the second race in succession, the Belgian faced a tough challenge from Ben-Philip Gundersen as the Norwegian chased victory on home soil but De Ridder would control the lead from the first corner and secure a comfortable win.

Behind them, Vasiliy Gryazin picked up his first podium finish of the season in the SRT machine, ahead of Linus Ostlund, Simon Olofsson and William Nilsson.

Local favourite Sondre Evjen had looked to have the measure of De Ridder after claiming Intermediate Classification honours, only to make a mistake in his semi-final and fail to progress further.

In the overall standings, De Ridder has a 32 point lead over Gundersen with three rounds remaining.

Round 3 of RallyX Nordic will take place in Nysum in Denmark on 11-12 August.