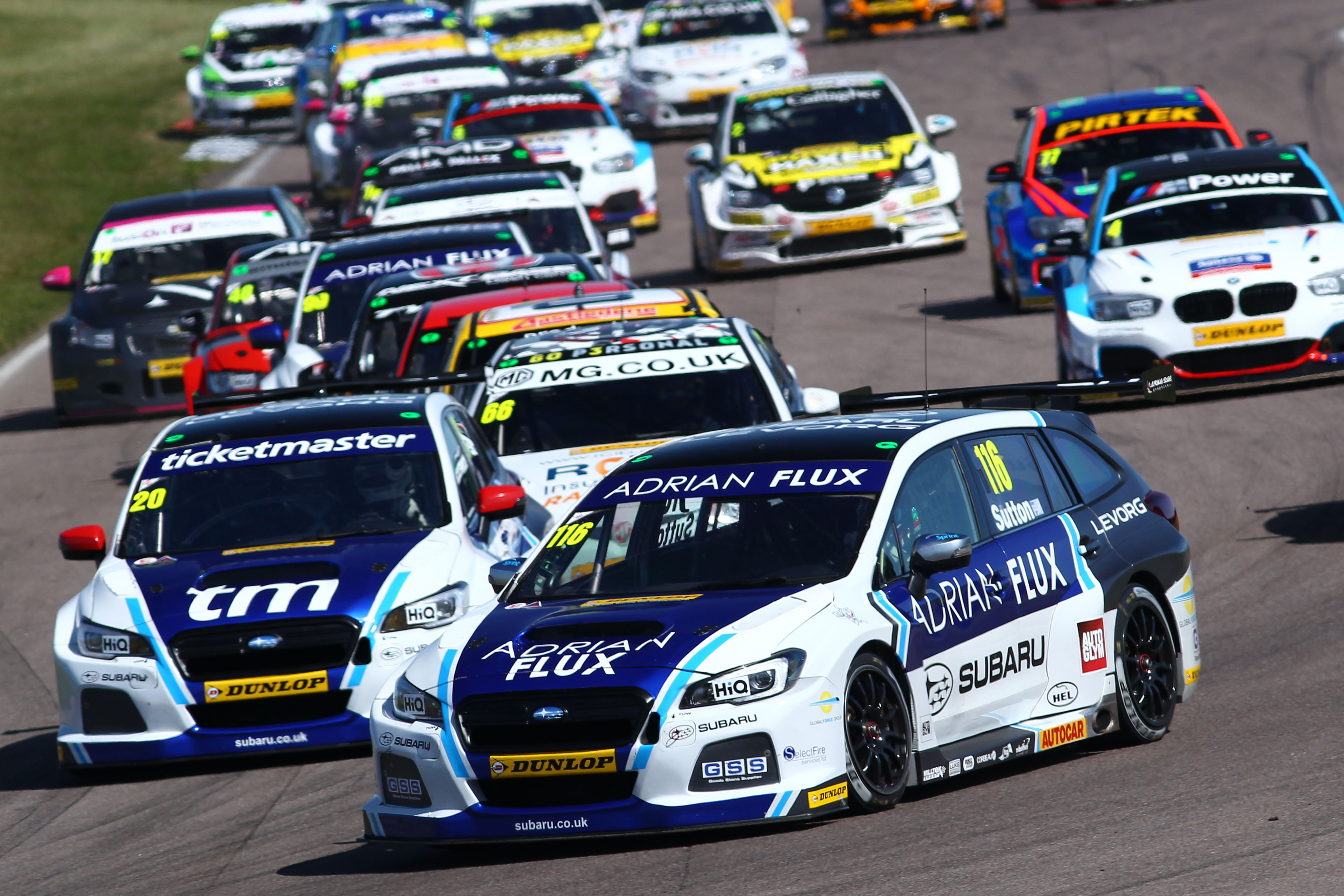 Adrian Flux Subaru Racing star Ash Sutton has moved to the summit of the 2017 Dunlop MSA British Touring Car Championship after surging to his sixth race win of the season.

It was also a memorable day for Sutton’s Subaru team-mate James Cole, as he claimed a hugely impressive maiden BTCC victory, whilst BMW Pirtek Racing’s Andrew Jordan returned to winning ways with a lights-to-flag success in the final contest.

It was Cole who kicked off proceedings in style at Rockingham, as the 29-year-old converted his first ever BTCC pole position into a commanding victory in the opener.

Cole gradually began to pull away from the chasing pack as Goff fell into the clutches of Sutton’s Subaru Levorg. Sutton’s moment would come on the final lap as he made a move stick at Tarzan corner to give Adrian Flux Subaru Racing an impressive one-two finish.

Young gun Sutton then extended his lead at the top of the table with his sixth race win of the season.

The 23-year-old cruised around the outside of team-mate Cole to take the lead at the beginning of the second bout, and he would go on to take a relatively comfortable victory, whilst race one winner Cole was shuffled down the order.

Team Shredded Wheat Racing with Duo’s Mat Jackson and Team BMW’s Turkington would go on to have a frenetic battle for second with the former edging the duel by the smallest of margins as the chequered flag fell.

Jordan then claimed glory in the finale, heading the pack from beginning to end, after firing his BMW 125i M Sport off the line and into a solid lead.

Ciceley Motorsport’s Adam Morgan made a number of attempts to get past in the early running, but Jordan pegged the gap and made a good getaway during a late safety car period, before going on to take the honours by 1.724s.

Morgan’s Mercedes maintained second until the finish, although the fight for the final podium position proved more contentious.

Title hopeful Collard hauled his BMW alongside Goff’s Civic Type R late on but unfortunate contact followed and the former was fired out of the race. Goff continued but he had lost the podium place to Subaru’s Jason Plato during the melee.

When the dust settled on a dramatic day of racing it was Adrian Flux Subaru Racing’s Sutton sitting atop the standings by 12 points over Turkington, whilst reigning champion Shedden slipped 55 points behind having only tallied four at the Northamptonshire circuit.

Ash Sutton said: “Luckily, we had the gap from the start of race two. We were told we could race. I just did my normal living on the edge around the outside stuff. It worked that time. There were no pre-discussions. The aim was to come here and try and pinch the lead away from Colin (Turkington) but to come away 12 points better off is just magic. I wasn’t expecting anything in the reverse grid race. It was a bit lively and I was bouncing across the grass and all sorts at times. I settled behind Colin and I was satisfied with that but he gave me the opportunity and I don’t hang around, so I took it. It was one of those where you dig deep. t’s helped having Shedden and Collard having a bad weekend. It’s just about maintaining and being around Colin now. If I can better him, then it’s a bonus, but all I have to do is match him. Our performance carrying the weight is so good at the moment. When we were having a bad time of it at the start of the season, we found stuff in the car that maybe we wouldn’t have otherwise. The car’s phenomenal, it’s unreal. We’ve been fine tuning it and that’s where we’ve found our performance.”

Colin Turkington said: “You’re fighting instinct is to pass the next guy and get the bigger trophy but it’s about risk management at this stage of the season. I was really surprised again with the pace of the BMW on the hard tyre, Mat (Jackson) was some way up the road but we were so strong at the end. I wasn’t expecting a podium but we’ll take that. I was sandwiched between James (Cole) and Jason (Plato) and it would have been easy to have been moved aside. I had to be patient and protect my line. I could see where James was struggling and as soon as he made the slip, I pounced. It’s been a positive weekend, really positive in terms of points scored. It was tough from the beginning and only got harder though throughout the day. I was a little disappointed with our pace in the third race. I just didn’t have the car I could move forward with. That said, a podium in race two was unexpected and it was good work. I have to go home smiling though given how it went for some of the other championship challengers. We just don’t quite have the pace at the moment, even when we were running less ballast than some of the others. It was the same at Knockhill. We could see them, but we couldn’t get to them. It’s frustrating but that’s where it is at the moment. We’re just going to try and keep working hard and maximising the BMW. We’re giving it everything and it’ll take a little bit of thought from here on in. We can’t just keep scoring points. I have to reduce our deficit at some point. We will work together as a team to close the gap – that can work wonders.”

James Cole said: “I don’t want to say I’m speechless again, but I am. The race win couldn’t have gone any more perfectly. I knew the front-wheel drives would be quick at the start. It was about getting away well and holding them off until they started to struggle. I knew the temperatures would suit us towards the end of the race, but at the start Jack (Goff) just wouldn’t go away. You can feel the tyres – it’s super abrasive at Rockingham and we’re not as quick at the beginning here, but we can manage it better towards the end. If it’s a win, Ash (Sutton) can bugger off, but anything else, then fair enough and I’ll move over for him.”

Andrew Jordan said: “You never give up. From 18th yesterday you’d never have thought you could sneak a win out of it. My attitude’s been to do my best and see what I can go and do. What a cracking job the BMW Pirtek Racing guys have done. They’ve had a tough couple of meetings this side of the garage so this result is for them. I knew they’d be really racy behind me early on. I was driving in my mirrors for a bit. I knew eventually that Adam (Morgan) would take the edge off his front tyres and we could pull out a bit of a gap. I thought back to Snetterton once I was out there though and it’s never in the bag, but once I got a gap I knew for the restart if I could do the same, it’d be job done.”