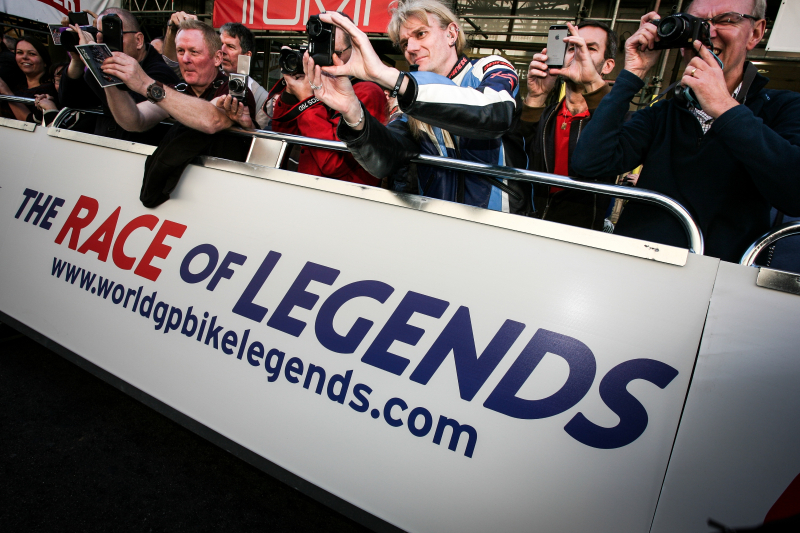 Save 31% compared to on-the-gate prices until 31 March
There are just ten days left to take advantage of the early bird price for World GP Bike Legends – with the ultimate three-day festival at Jerez Circuit costing just €55 for adults. Over the weekend of 19-21 June some of the best riders and bikes from the golden era of motorcycle racing will head to Spain to do battle on track during the day and swap stories over campfires.

Entry tickets grant unrivalled access to the paddock and pits where fans will be able to meet some of the biggest names in grand prix motorcycle racing history. Freddie Spencer, Wayne Gardner, Kevin Schwantz and Loris Capirossi are among those already confirmed for World GP Bike Legends, with plenty more former champions and race winners joining them for a real on-track battle.

For their €55 – 31% less than the on-the-gate price – racing fans won’t just get stunning on-track action from an amazing collection of legendary riders, there’s much more on offer across the three days, too. Live music from some superb tribute acts, Toseland and the spectacular Bonnie Tyler is all included, as is access to the shopping village and the grandstands around Jerez.

After the early bird period ends on 31 March the advance ticket price of €65 will come into effect – for more information and to buy tickets, head to http://www.worldgpbikelegends.com/tickets.

Counting down the ten days to the end of early bird pricing, we’ve created ten reasons to buy your tickets below:

10 – Unbeatable value! Early bird discounts mean that the entire weekend of action and entertainment is just €55 per person, making World GP Bike Legends the best value for money event around. Better still, children 12 and under can come to the event COMPLETLEY FREE when accompanied by an adult.

9 – Real racing! Sometimes classic events are all about parades and keeping the incredible old racing bikes behind barriers – not World GP Bike Legends! Some of the most iconic bikes and riders from the 1980s and 1990s will be firing up to RACE flat out against each other for pride, glory and of course silverware. Heading the bill will be the ‘Race of Legends’ in three classes – 125cc, 250cc and the ultimate 500cc grand prix bikes.

8 – Jerez Circuit! The spectacular Spanish track is an amazing venue for the first ever World GP Bike Legends, and is undoubtedly one of the most loved circuits for bike racers and fans alike. With amazing viewing for spectators, it’s going to be the perfect place to catch some summer sun. Whether you’re local to the track or travelling from afar, Jerez is going to be the mecca of motor sport on 19-21 June.

7 – Unrivalled access! A far cry from the ‘us and them’ attitude of current grand prix racing, at World GP Bike Legends there are no boundaries between riders and fans. Every ticket grants access to the paddock and pit area, so everyone that comes will have the chance to get up close to some of the most amazing racing bikes ever made. Of course swap stories with grand prix winners and former world champions who will be around all weekend – when they’re not racing each other of course!

6 – Shop ‘til you drop! It wouldn’t be a full festival weekend without somewhere to shop. The shopping village will be the perfect place to find that retro jacket you’ve been meaning to buy for years, with stalls selling all things classic biking. As well as memorabilia there will also be modern gear on offer, and plenty of food and drink to see you through the weekend.

5 – A truly international event! The trick is in the name – World GP Bike Legends will feature riders and bikes from all around the globe. Racing stars from Spain, Italy France, the UK, the USA, Japan, Australia and New Zealand are already confirmed, with plenty more announcements yet to come, so there’s going to be something for bike racing fans from every continent at Jerez in June.

4 – Live music! World GP Bike Legends is about more than just on-track action, it’s a full festival weekend, and no festival is complete without some live music to bring the curtain down on each day. On Friday night some of the best known tribute acts around – Queenmania and The ZZ Tops – will be belting out the biggest hits from Queen and ZZ Top, and Saturday night looks set to be an even bigger treat. Double World Superbike Champion James Toseland will be rocking out after the racing has stopped with his band Toseland, then music legend Bonnie Tyler will take to the stage as headliner. With all this included in the early bird ticket price, it makes World GP Bike Legends an unmissable weekend.

3 – Supporting cast! As well as the headlining ‘Race of Legends’, we’ve recently announced the first of many support races that will feature throughout the weekend – The International Classic Grand Prix (ICGP). Adding even more amazing bikes and racing stars to the line-up, there will be non-stop action at Jerez from sunrise on Friday to the final chequered flag on Sunday!

2 – Two-strokes! World GP Bike Legends is a celebration of the two-stroke engine. It’s no secret that the 1980s and 1990s were a golden era of grand prix bike racing, and the fire-breathing two-stroke beasts that the world’s best riders did battle on are an increasingly rare spectacle. From the precise and nimble 125cc and 250cc classes to the ultimate expression of two wheeled racing – the 500cc grand prix bike – Jerez will be bursting with the most iconic and evocative machinery in the world. Don’t miss out!

1 – The one place to meet your heroes! Jerez on 19-21 June will more than likely be hosting the biggest collection of motorcycle world champions ever seen. Already confirmed to race are the likes of Freddie Spencer, Wayne Gardner, Kevin Schwantz, Loris Capirossi plus many more race winners and legends of the 1980s and 1990s. Coupled with an open-access policy, there’s no better place to come and meet your heroes, swap stories from the golden age of racing, then watch them go out and do it all again on their original race bikes!