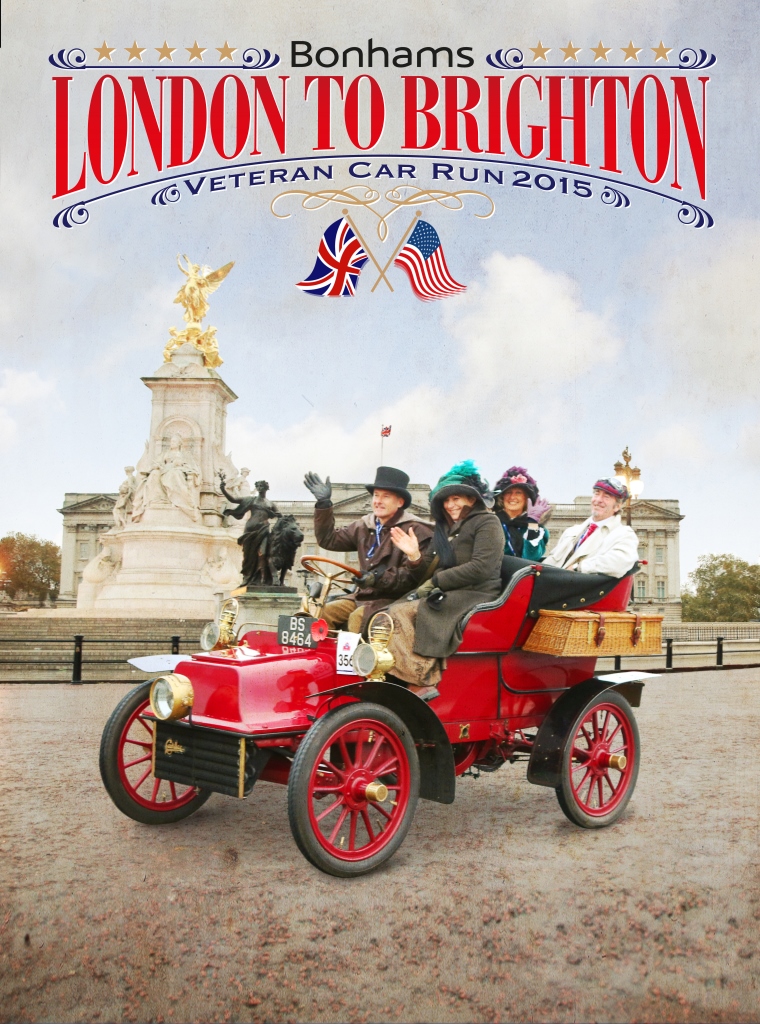 In recognition of the large number of American automobiles regularly taking part in the annual Veteran Car Run, this year’s event – which is once again supported by auction house Bonhams – will have a distinctly US theme. As entries open today (31 March) for this, the world’s oldest motoring event, the lead image promoting the 2015 Run has been revealed depicting a glorious bright red 1904 Cadillac passing in front of Buckingham Palace.

The Cadillac was one of 109 cars from US marques taking part in the 2014 event that together represented almost 25 per cent of the entries. Although Cadillac, with 25 examples and Oldsmobile (31) accounted for the lion’s share of the American entries, they were joined by a number of other US marques including Pope, Stanley, Rambler, Northern, Pierce, Waverley and Ford… some better known than others. While the first horseless carriage might have come from Benz in Germany, the Americans were also an inventive force among the early automobile pioneers.

At the end of the 19th century and the start of the 20th, they were hard at work producing not just petrol-powered cars, but also cars powered by steam and by battery – today’s electric vehicle revolution actually started more than a century ago.

The 2015 Bonhams Veteran Car Run will have pioneering cars and tricycles powered by examples of all three types of propulsion, all with the goal of reaching Brighton by the end of the day. Ben Cussons, Chairman of the Veteran Car Run Steering Group and Royal Automobile Club Motoring Committee said, “On behalf of the Royal Automobile Club and the Steering Group for the Bonhams London to Brighton Veteran Car Run, we’re delighted to welcome entries from pre-1905 cars as we look ahead to the 119th anniversary of the Run. We hope to see even more US car marques as we celebrate them this year, and look forward to a stellar line-up from all over the world at the start on Sunday 1 November. In the meantime, the team are working hard to make sure that this year’s Run is the best yet”.

As tradition dictates, the 2015 Bonhams Veteran Car Run takes place on the first Sunday in November, with the first of the 400-plus cars leaving Hyde Park as dawn breaks just before 7am. The route will then thread under Wellington Arch before passing Buckingham Palace at the start of the 60-mile trip to Brighton. Used last year for the first time in recent history, the drive past the Palace and down The Mall delighted spectators and participants in equal measure.

Celebrating the original ‘capital-to-coast’ Emancipation Run held on 14 November 1896, the first re-enactment took place in 1927 and it has been held every year since, barring the war years and 1947 when petrol was rationed. It commemorates the Locomotives on the Highway Act, which raised the speed limit for ‘light locomotives’ from 4 to 14mph and abolished the need for these vehicles to be preceded by a man on foot waving a red flag.

Open to all cars built before 1905, making the youngest on the Run 111 years old, the event is a moving history show, with car names both familiar and obscure… Delahayes, Panhards and Leon Bollees mix with the earliest examples of more familiar marques such as Vauxhall, Renault, Peugeot and Rover.

Not only is the Veteran Car Run the world’s oldest motoring event, it is one of the most popular, too. It is estimated that as many as half a million spectators line the route as it winds its way to the official finish, at Brighton’s Madeira Drive. The entire event is free to view. And the Run is just one element of London Motor Week, most of which is free and open to the general public.

Other events include the popular free-to-view Regent Street Motor Show, to be held on Saturday 31 October, which turns the “Mile of Style” into a motoring showcase that puts the spotlight on veterans and moderns alike.

The long weekend starts with a motoring forum at the Royal Automobile Club in Pall Mall on Thursday 29 October and then on Friday 30 October, Bonhams will hold its annual veteran car auction. From Monday 26 October there are a number of invitation-only lunches, receptions and other functions planned for the Royal Automobile Club and the participants taking part in the Run from all over the world.

With entries now open, prompt participants can take advantage of an ‘early bird’ discount of over 35% on the standard fee which applies until 29 May.

For more details of the event and access to entry forms visit www.veterancarrun.com.