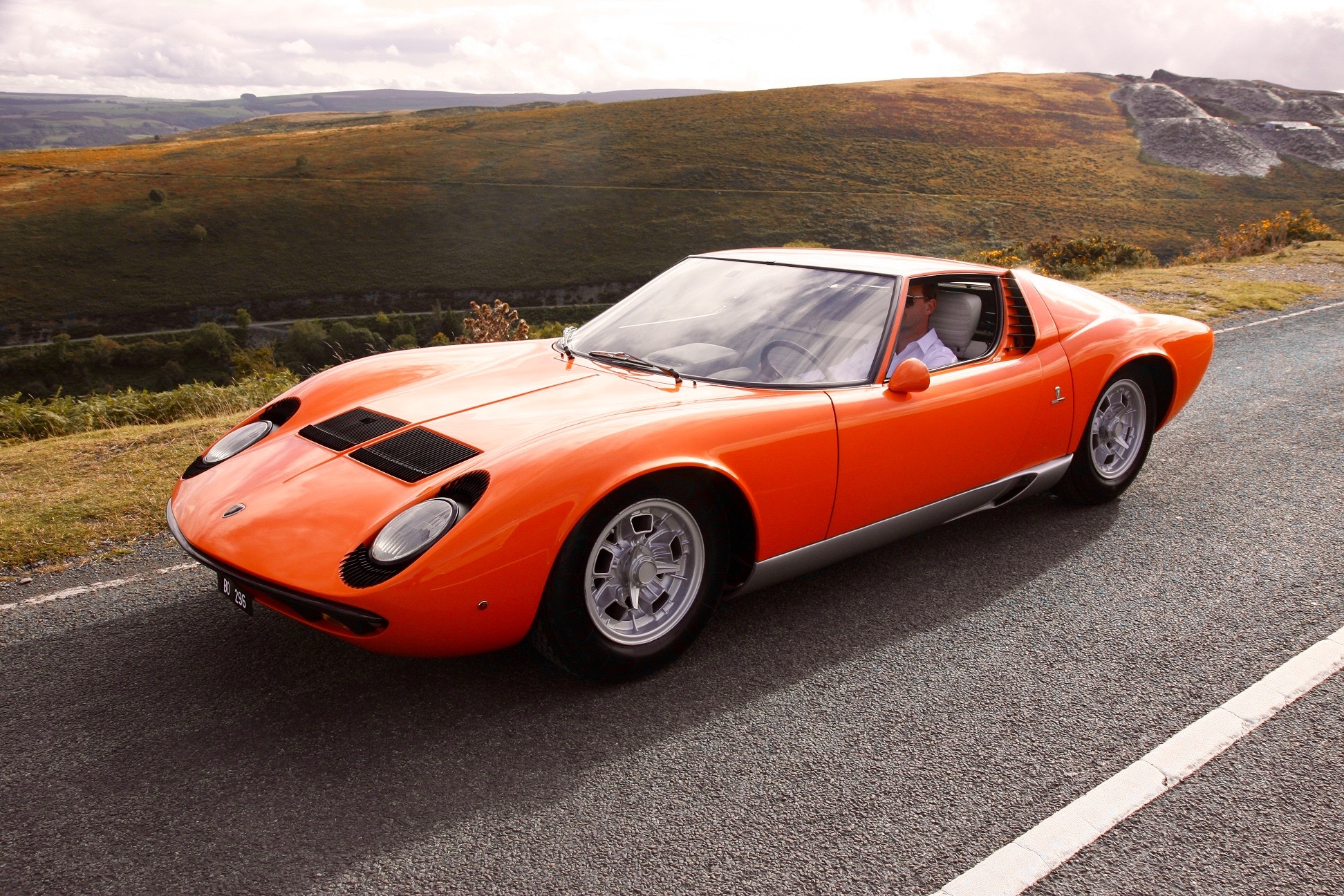 Which car producing country will win as The Grand Avenue prepares for motoring’s ultimate contest? National pride is at stake…
A vivid orange Lamborghini Miura – arguably the most famous Lamborghini in the world, no less – is making a bid for Italian glory as teams of classic cars line up for a unique Six Nations contest at the London Classic Car Show (18-21 February) to find the world’s leading car producing country.

The Miura, chassis number 3586, is the actual car used in the opening scene to 1969’s The Italian Job film. Although apparently written off in an Alpine tunnel, the car in fact was undamaged and sold to a customer after filming… the actual wreck that was pushed down the mountainside in the movie by the mafia-controlled bulldozer in fact was another Miura that had already been badly damaged in a crash.

The legendary Lamborghini will join Ferraris and Fiats, Lancias and Maseratis in the Italian squad as they take on teams from Great Britain, France, Germany, Japan and America. The winning team will be decided by the hearts and minds of visitors to the show, to be held at the ExCeL centre in London’s Docklands.

With all six teams fielding ten cars each, there will be 60 iconic cars in total… and the Miura marks the half way point as the 30th Six Nations car to be announced.

As 2016 marks the 50th anniversary of the Miura and the centenary of the birth of company founder Ferruccio Lamborghini, its appearance for the Italian squad is highly appropriate.

But the competition is fierce!

Heading the home team will be cars from famous marques like AC, Aston Martin, Lotus, Jensen and Jaguar. The team’s older statesman is the very first official Le Mans entry from Bentley – a glorious 1925 3-litre finished, naturally, in British Racing Green. Among the other cars it will be scrumming down with are a Jaguar E-type, a Jensen FF, an AC Ace, a Lotus Esprit and an Aston Martin Lagonda.

In the blue corner, among those representing France will be a couple of mid-engined pocket rockets – the Renault 5 Turbo and rally-inspired Peugeot 205 T16 – while Germany’s line-up includes the original Audi quattro, Porsche 356 Speedster and, fittingly in the company’s centenary year, a host of BMWs, including the CSL ‘Batmobile’, an original 328 and an M1.

As well as the Miura, the Italian squad so far also includes an early Lamborghini Countach LP400 Periscopio, a Fiat Dino, a Ferrari 250 Lusso and the only non-red Ferrari F40 in existence… appropriately for The Six Nations it’s wearing Azzuri blue.

From the Far East comes a host of iconic sporting saloons and coupés, many seldom seen in the UK. Joining the Datsun 240Z there will be an original Skyline GT-R saloon from 1972 plus the rare Toyota 2000GT (just 351 were made). Seldom seen on these shores is the 2000GT’s baby brother, the Sports 800, the first car to feature a targa top.

And finally comes the USA team with cars like an original Ford Thunderbird and the vast Cadillac Coupe Series 62… if fins meant wins, the US team would have it.

More cars are being added in the movie and being announced via the show’s social media platforms. When the show opens its doors on Thursday, 18 February, a total of 60 cars – ten from each nation – will line up on the extended Grand Avenue, the show’s unique live roadway that runs through its centre allowing visitors not only to see but also hear the glorious selection cars in action.

“The Six Nations on The Grand Avenue started as a bit of fun, but as we have been curating each nation’s representatives it has developed more of a serious edge,” said show director Bas Bungish.

“Each country has some serious metal ready to uphold their national pride so it’s really hard to decide which one might come out on top by the time the show closes. Ultimately the decision lies with the visitors to the show.”

The Grand Avenue will be in action throughout the four days of the show and will also be used by other road and competition classics, including the exceptional McLaren F1, hailed as the greatest supercar of the 20th Century. The London Classic Car Show has a special display devoted to the McLaren and its creator, Gordon Murray.

Organised by Brand Events, the company behind CarFest and Top Gear Live, show tickets are on sale now and start at £23 (including booking fee) for single adult entry on Friday, Saturday or Sunday and rise to £65 for entry to Thursday’s Premium Preview Evening. This includes fast track entry, the best views of The Grand Avenue at the Turning Circle Viewing Platform, access to the exclusive Premium Lounge, a Show Handbook and even a glass of Joseph Perrier champagne.

To keep up-to-date with all the news from the London Classic Car Show visit the dedicated website – www.thelondonclassiccarshow.co.uk – or go to the show’s interactive Facebook page. Just search ‘London Classic Car Show’ from your own page and 2016 show news and 2015 highlights are there to be enjoyed.