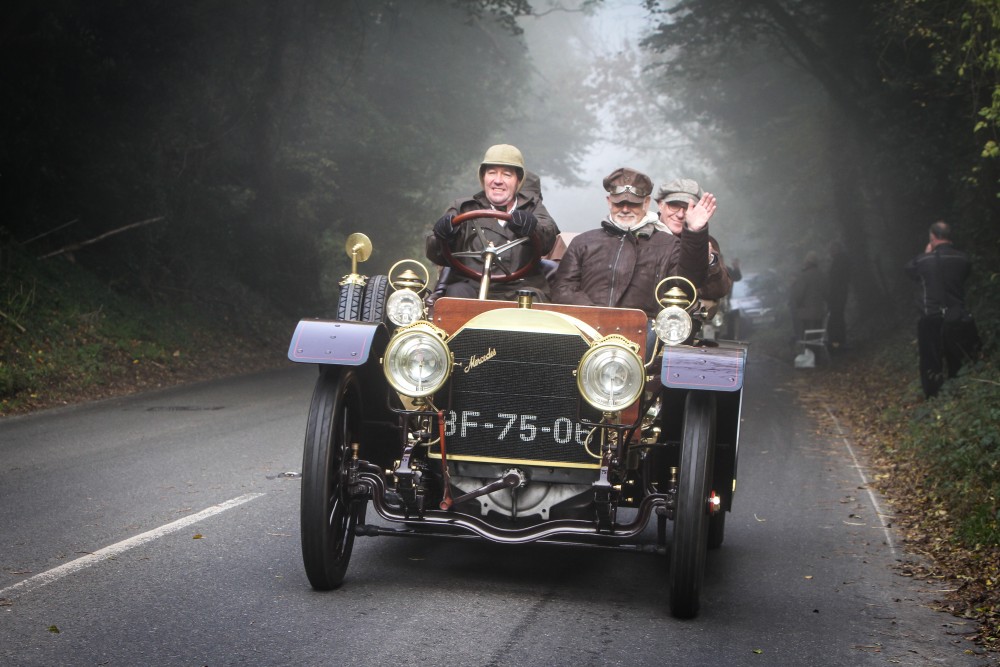 More than 380 pioneering veteran cars dating back to very the dawn of motoring enjoyed unseasonably mild conditions to take part in this year’s Bonhams London to Brighton Veteran Car Run.

As tradition dictates, the 119th Anniversary Run set out from Hyde Park at day break and headed 60-miles south through a misty London and onto a sunny Sussex seafront. For only the third time in more than half a century, this year’s route took the intrepid participants – all driving pioneering cars from the pre-1905 era ­– past Buckingham Palace and down The Mall before heading past Big Ben and over Westminster Bridge. The capital’s early morning mist added to the period Victorian atmosphere.

The first few cars began to arrive on Maderia Drive shortly after 10am – the 1903 Berliet driven by John Bentley just pipping the 1904 Fiat of Dutchman Jan Bruijn to the honour of being first past the finishing post.

Among the others turning back the clock were Pink Floyd drummer Nick Mason, renowned Formula 1 team principal Ross Brawn and multiple Le Mans winner Jochen Mass. They were joined en route to Brighton by three classic coaches driven by BBC Radio broadcasters Chris Evans, Alex Jones and Ken Bruce raising nearly £350,000 for BBC Children in Need thanks to the generosity of their 40 passengers.

Before the start Evans, Jones and Bruce were joined by Natalie Lowe from Strictly Come Dancing and Robert Brooks, Chairman of Bonhams, for the ceremonial tearing up of the red flag. The symbolic ritual harks back to the original Emancipation Run, held on 14 November 1896, which marked the milestone Locomotives on the Highway Act and raised the speed limit for ‘light locomotives’ from 4 to 14mph abolishing the need for a man walking ahead of the cars waving a red flag.

The annual Run is now the only event anywhere on Earth where so many veteran cars parade in such numbers.

“That was without doubt the best car experience I have ever done,” enthused Evans after crossing the line. “I had absolutely no idea it was such a fantastic event – so wonderfully, wonderfully joyous. It’s like the London Marathon, with so many smiling faces, often ten deep on the roadside cheering you on all the way to Brighton. What’s more, thanks to the generosity of our passengers, we have raised a mega amount of money for BBC Children in Need. It was just an incredible day and one we must do again and again.”

Other entries included Genevieve from the eponymous 1953 film, a large number of cars from the US celebrating this year’s American theme and significantly the 1901 Isotta Fraschini – chassis number one – the very first car to wear the famous ‘IF’ badge which was making its VCR debut this year.

Mass, Mason and Brawn all made it to Brighton, too. Brawn needing all his engineering skills – and several tie-wraps – to overcome a broken flywheel on his 1904 Wilson Pilcher. “It’s such a fabulous event, we just had to make it to the finish,” he said.

Another impressive finisher was the steam-powered 1888 Truchutet driven by Daniel Ward – the oldest car on the run – believed to be one of the earliest vehicles to have ever completed the event.

In total 342 of the starters managed to complete journey from Hyde Park to the Sussex coast before the 4.30pm deadline, thus receiving a coveted finisher medal.

Having been introduced in 2013, the Veteran Car Run now includes a regularity section, where participants have to average a precise speed between two controls. It was the 1900 Georges Richard of Rodney Fowler that claimed the coveted trophy.

Ben Cussons, Chairman of the Veteran Car Run Steering Group and speaking on behalf of the Royal Automobile Club said: “This must have been one of the best London To Brighton Runs ever. Once the early morning mist burned off, the sunshine was unbelievably warm – some were even remarking it was too hot! Motoring more than a century ago was never for the faint-hearted but today’s mild conditions were welcomed not just by the participants but also by the hundreds of thousands lining the entire route.

“I would particularly like to extend my thanks to Lodge Coaches for providing Chris with his coaches and all the volunteers and marshals along the 60-mile route who make this wonderfully unique and very, very special event possible.”